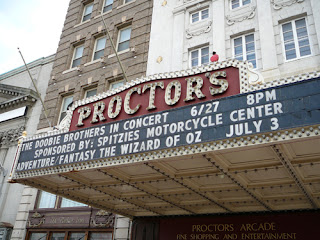 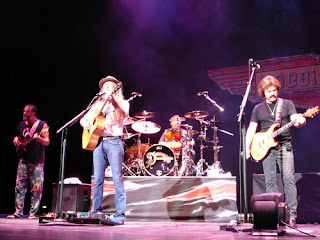 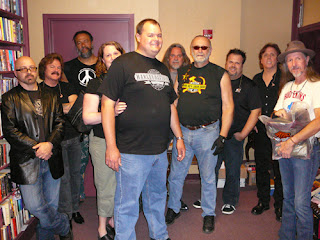 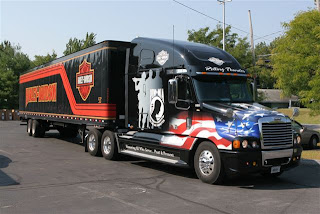 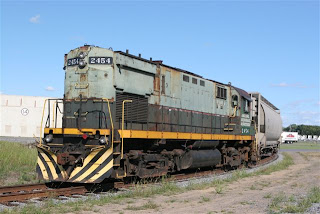 Old Switcher for Railex in Rotterdam. 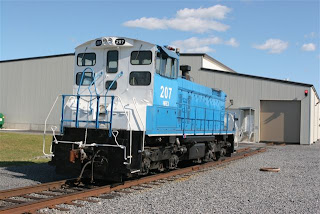 New switcher for Railex in Rotterdam. 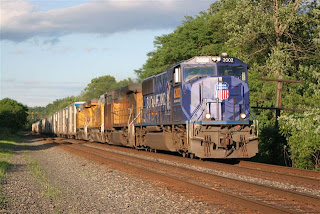 Produce Train. Only time this unit has been on this train. Westbound at Tribes Hill. 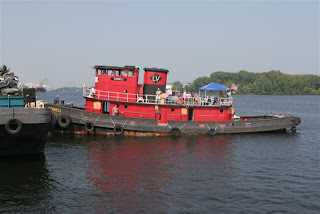 Lehigh Valley tugboat...restored...Port of Albany during the Tugboat Round-Up. There are only two LV Tugs left. It has and EMD Prime Mover 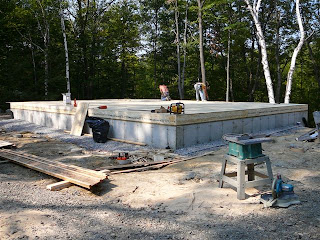 Finally, the new basement for the model railroad. Someday Lincoln Logs will bring the house, LOL!

From John Camerota..... NS 9034 in the lead of a westbound empty coal train, Alleghany Yard in Olean, NY
From Brad Peterson... 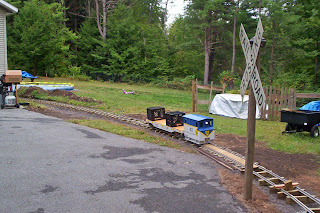 The crossing with my whole train in tow. 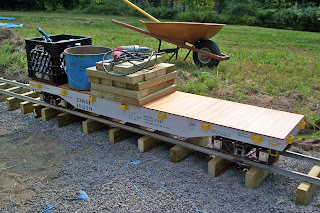 Once I had some ties in place, I loaded the flat car with supplies and was able to use it as a seat for spiking/gauging. I'm using exterior drywall screws with a washer added to secure the rail to PT 2X4's. 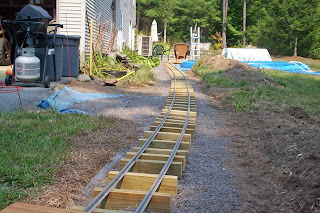 This will work great until the extension cords run short. Just kidding, I have a cordless that works fine. Looking east with the deck in the background.
From Tony Bucca..... 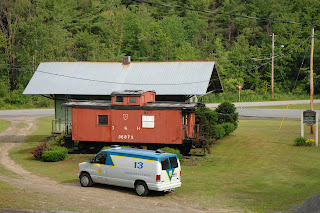 Work is progressing on the caboose at King's Station. At our work party last night , we unloaded the 1/4 inch steel gutters we had made up to weld to the edges of the roof. I took a trip all the way down to exit 11 of the northway to measure some things on the 35702-the ex-D&H caboose that's an ice-cream stand. It has v-groove bead-board siding, and we'll be able to match the dimensions very closely. We have been scrapping the roof of the aluminum
coating, and we should be able to get the gutters welded in place this week. 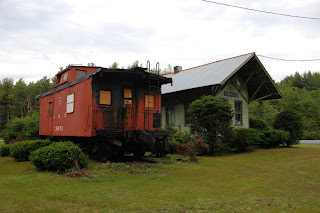 Then we'll peel the first layer of plywood to determine if the primary layer is going to be OK as a substrate for the bead-board. Landscaping is ongoing, and I hope to bring in some ballast for around the ties. As always,photo documentation is ongoing. We are very lucky to have a number of non-rail citizens involved in the project, just for the historical side of it. But that's part of the Bridge Line Historical Society! 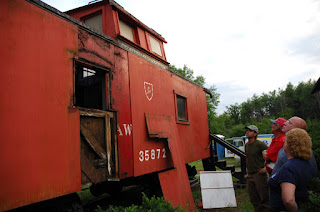 Thanks to C.R.O.C.K.S. (Citizens Restoring Our Caboose at King Station,) progress has been made on our work on the caboose. We went before the town of Greenfield board with our work and schedule plans, and they not only approved our estimated budget, but increased it by about 25%. Our town supervisor, Al Janik wants to make sure things are done the right way. We've had a couple of work sesions, initially to clear overgrown shrubbery, and pull up buried brick pavers, in anticipation of engraved pavers we hope to sell for between the depot and the caboose. Work on the caboose began in earnest with a good cleaning of the inside. On a subsequent work-day we drilled out the screws securing the roof-walks so we could have a clear shot at re-doing the gutters and roofing. The caboose has TWO layers of plywood sheathing, the second extending past the edge of the roof-line, allowing for water infiltration. We, as a comittee have decided to strip both layers down to the frame-work, and re-do the siding in a more aesthetic bead-board as early cabooses had. While I was in Cass,WV, I was able to get some detail shots of some of their wood-side cabeese. The general good shape of the metal roof will allow us to divert monies ear-marked for roofing to the slightly more expensive bead-board. We plan on doing a side at a time,but not till after we have welded on new gutters. 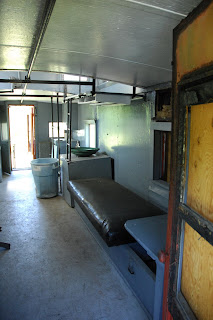 Thanks to BLHS historian Brad Peterson for keeping an eye on the caboose as he passes by each day, and to Bill Bibby who also wants to get involved from North Creek. I will be presenting a Power-point presentation at the BLHS convention in October, so I have been keeping a photographic record of progress to date.
Posted by Rob D at 12:32 PM No comments: 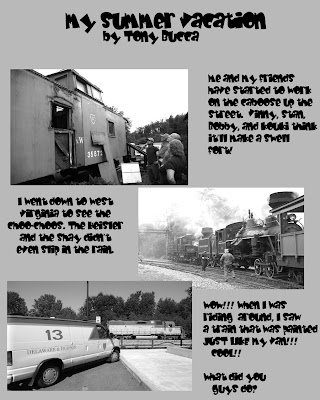 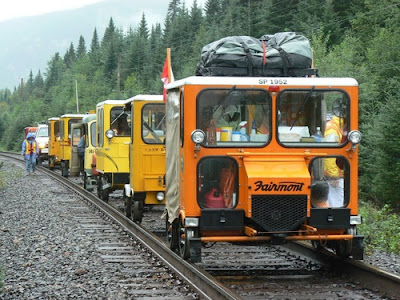 Not exactly what I would choose to post but....Go to:http://conradstenton.multiply.com/photos/album/207/Quebec_Northshore_Labrador_Run
here are some pic's someone on the trip did post.
As you can see, we had some rain, typical for Labrador and it was definitely cold all of the time, 30's to 50. It snowed just north of Mai before we got their.
I will be writing an article for the D&H Bridge Line for next issue. I wasn't able to send in a column for the current issue, just plain ran out of time. Hopefully the guy will send more pic's of the trains and facilities. I definitely will make a video of this run.
The loaded ore trains are 240 cars with two units leading and one mid train now. Wabush Mines (Mines Wabush in French/Canadian) are behind the helper and hauled for the Wabush mine. Many things had changed on the railroad since my last trip just prior to 9/11.
The labor problems I was told the railroad had were actually problems the mine workers had with the mine management itself which would affect the railroad by ore haulage but did not relate to the railroad in any other way; the railroad did not have labor problems as we had been informed so our trip was never in jeopardy.
Got 11 hours sleep last night, finally feel awake after two weeks, haha! These "mainline" trips are definitely not relaxing. Really happy I could get one of my partners & fellow BLHS member Bill O'Connell (alias General Patton, alias Sheepskin) on the trip.
Regards, Bill K 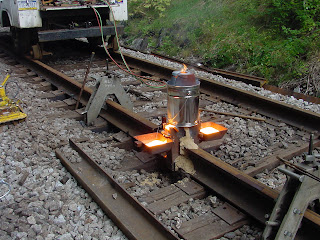 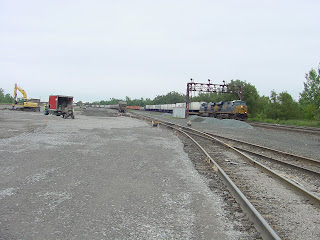 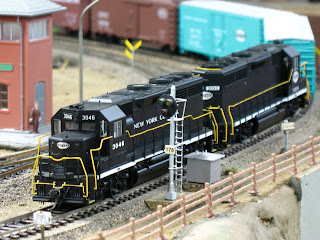 I took this picture the other day on my layout. Both of the NYC Atlas GP40's were from Alex's collection, purchased from Paul's. I hope Alex would have approved.
Randy E
From Brad Peterson... 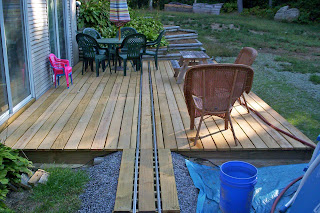 The new deck, or should I call it the log unloading platform. Through the sliding glass doors is the woodburning stove and this 1 1/2" gauge railroad will be used to get from the wood pile to the stove this winter. 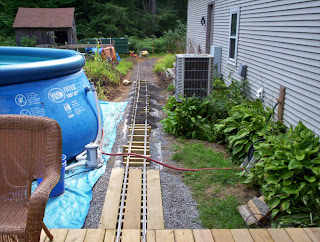 Looking west from the deck is the first 30' off the20' deck. This includes a small crossing for the kids to get from the pool to the deck without jumping over the tracks. Its the first 50 feet done in July. 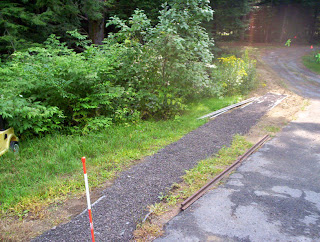 Turned around from the last shot is the 'S' curve to get across the gully next to the driveway. The wood pile will be in the driveway turnaround just beyond the sub roadbed. The tracks will enter the woods and head for the mailbox. Brad P........
Posted by Rob D at 12:44 AM No comments: