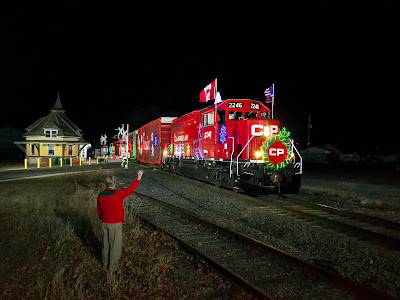 As with the arrival of Thanksgiving, the arrival of Canadian Pacific's Holiday Train ushers in the holiday season here in the Champlain Valley. As the date drew near for the middle of the night deadhead move south from the U.S./Canada border to Albany, NY, Greg Klingler was inquiring of me where I wanted to shoot it this year as Greg was interested in posing in the photo for me! I initially replied (of course!) the overlook in Port Henry! Greg suggested the ex-D&H station in Fort Edward as I had not shot the Holiday Train there yet. Fort Edward won! The ex-Delaware & Hudson station at Fort Edward has been restored and from this angle its D&H heritage still shows.
Arriving in Fort Edward between 00:45 and 01:00, I got right to setting up the lighting. Greg had agreed to meet up with me around 03:30ish. He shows up at 03:00. With the lighting done, all Greg needs to do is step into the scene and pose waving, while I do the rest, positioning him and checking the lighting on him. It has been “awhile” since Greg and I had met up and we shoot the breeze for a time, then walk over to the waiting scene and try some test shots. North of us, the 2017 Holiday Train behind GP20C-ECO 2247 is making its nocturnal deadhead move southbound to Albany, NY. This is Greg and my reason for meeting up! Through Plattsburgh, NY just after 01:00, I feel we have lots of time before we should expect to see the colorful train, maybe between four and five a.m. I’m thinking.
The test shots look super here! Greg has his wave down again tonight! While we wait we converse on various topics then our attention is drawn across the tracks to a neighbor who emerged from his home. I notice “the dog” first. A hulking German Shephard accompanies the man, barking constantly! From what I gather, in between the barks, the man dose not like the lighting going off, as it falls in his yard etc. He wants us to stop. Greg and I quickly agree...............this man is probably NOT a railfan, LOL! There is no conversation possible though, the dog continues to bark loudly. I realize ahhhh...........situations such as this is what those hamburger patties laced with tranquilizer are made for! The neighbor returns to his home, then reemerges without the dog shining a flashlight at us saying............”You want a light? Here’s a light for yah!” We are silent, he starts cursing us again, then goes back inside.
Greg and I converse for another twenty min. or more, then he mentions he will go get a coffee from his car parked over behind the station. Recognizing this as an open invitation for the Holiday Train to appear suddenly, I am on alert! Watching as Greg reaches his car, the signals north of the station light up red over red, LOL! A train is in the block north of the station! Greg sees the signals light up and leaves the coffee, walks over to the station platform to eyeball the red over red signal, then walks back to join me. Relieved, I do a couple test shots, maybe a minute later headlights appear north of us. greg asks if this is him, I reply yes! The train seems to be moving slowly but is a long distance away. The crossing signals activate below us, I hear what sounds like fireworks crackling, (it was the flags flapping) the engineer starts whistling. Now I realize he is moving fast! Max. speeds here are 40 freight, 60 psgr. H
The photo unfolds in a few seconds! Down past the station and over the crossing comes 2247, passing my mark the lighting reflects back red! then the 2247 is by me, the fourteen trailing cars roll past then Greg is asking me how it came out? I get down from the stepladder and walk over to show him, Greg is ecstatic, as am I. Can’t wait to see it processed. What a beautiful train! Shot in Fort Edward, NY on November 26, 2017 at 04:24, 1/800 @f3.2. Special thanks to Greg Klingler! Please enjoy! Comments are welcomed. 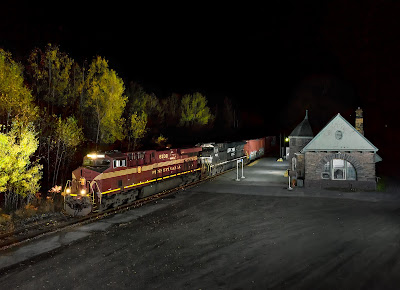 As I have mentioned before, we railfans who live near Canadian Pacific's (CP) ex-D&H Canadian Main are blessed to witness all EMD locomotive consists once in a while on the 252 & 253 trains in this age of General Electric dominance of the CP locomotive roster. Another “treat” for D&H nocturnal train watchers, (at least this one) arrived early in the morning hours of October 29th in the appearance of Norfolk Southern's (NS) Pennsylvania Railroad Heritage engine, NS 8102! Leading CP train 931! 8102 wears one of the classier heritage paint schemes I think. When the news arrived via the railfan network the night before, it was a “no brainer” where I wanted to shoot “The Pennsy” engine, from the roof of the ex-CP RS-18 in Port Henry.
I headed out from home in Hinesburg at midnight, with 931 scheduled to depart Saratoga around the same time, confident I would give myself plenty of time to setup and do any tweaking of the lighting that was needed. All in all, involving at most forty five minutes. I figured two and a half hrs. at best from Saratoga to Port Henry in 931s case tonight! Well.............how about two hrs. and eight min.?! I was all set up and drinking tea................ on the ground, not up on the RS-18 cab roof of course, when I heard an air horn to the south of me, down Lake Champlain! My first thought hearing the air horn blowing for a crossing was........”I wonder what train this is? This cannot be my train?” Then the realization arrives that there is NO other train running northward tonight on The Canadian Main at this time! Oh man, the return of the Pennsy Heritage engine, which had visited the Canadian Main years ago, was about to happen!
I was quite impressed with the quick run 931 was making tonight. I had learned the job departed Saratoga at 00:10, and here I was hearing them south of Port Henry before 02:00! It was not that long ago it took northbounds one and a half hrs. Whitehall to Port Henry. It turned out 931 had a short train, (twenty or so cars) which helped them make good time. Enjoying the moment, listening to 931s engineer blowing for crossings, the stars overhead with warm temps and tea to enjoy, it suddenly dawned on me it had been a while since 931 had blown for a crossing, and I knew they were in that stretch of track approaching town. Time to ditch the tea and get up on top of the RS-18 cab roof! It takes me less than a minute, I know the route by now, (big smile) and once up top I pause listening, hear nothing and take a test shot. Everything looks good!
Now I hear the low rumble of GEs exhaust, followed by the occasional squealing of flanges as 931 negotiates the sharply curving trackage south of town along Lake Champlain. A louder low rumble, signaling the power passing over a small bridge less than a mile away. Out of the darkness, the bells in the crossing signals activate down around the curve below the station, the engineer blows for the crossing then headlights appear, yes! Here we go! Coming up past the station, the station lights help transform the headlights into the Pennsy Heritage engine! Then the 8102 returns into the darkness, comes past my mark and the lighting reflects back Tuscan Red! Checking the image before I move while 931s consist passes by below me, it looks like success! And, 8102 is CLEAN! See what you think? Shot in Port Henry, NY October 29, 2017 at 02:18. 1/800 @f 3.2. Special thanks to Tyler Fortuin for his help! Please enjoy! Comments are welcomed. 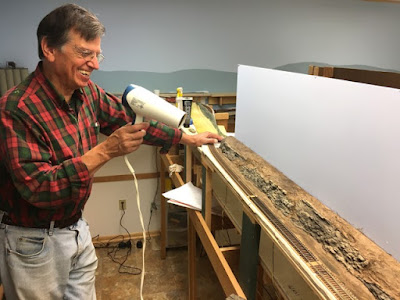 We were up to Bob Mohowski's last week Don Buesing and I, to do a little scenery on Bob’s layout. Bob started his layout about  eight years ago and up until now, it has had no scenery at all! After a recent conversation with Bob, I offered to do a small section of scenery on the layout for him and he agreed to give me an area where I could make my contribution. I wanted to do something that would get Bob excited and energized about his railroad again, so Don Buesing and I agreed that we would meet up in Saratoga, and spend the day working on Bob's layout. The day started about 9AM and ended around  9PM and though it’s just a start, it added a great deal of color to Bob’s Railroad.

Bob works "Dryer Detail" to firm up the ground goop and get it ready for a darker earth colored paint. 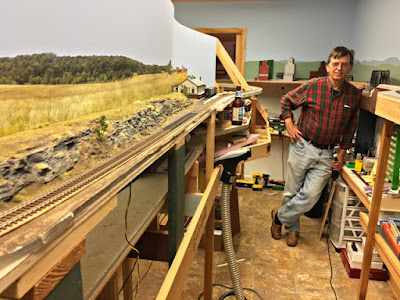 When the day was done, Bob told me that he "now has a confident new perspective for what is possible with his railroad” and feels excited about looking into the  room each day, being inspired by what he'll see... 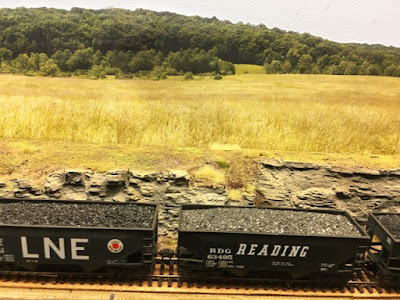 A coal drag moves upgrade through the cut, which was created using Rubber Rocks, ground foam and some photo backdrops which I shot this summer.