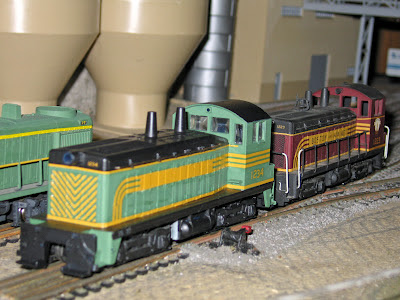 They still need some touch-up, a few details and decoders but I now have a couple new locomotives on the Southern Adirondack RR. The 1234 is an SW-9 in a B&M/MEC inspired scheme while the 2319 is a B23-7 in the D&H like lightning stripe scheme. These photos were all taken around the Round Lake Paper mill in Mechanicville. 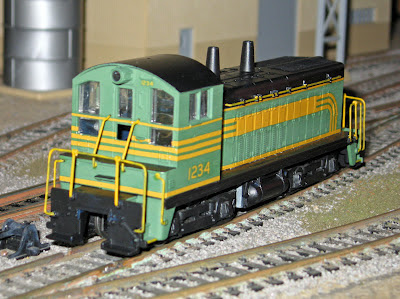 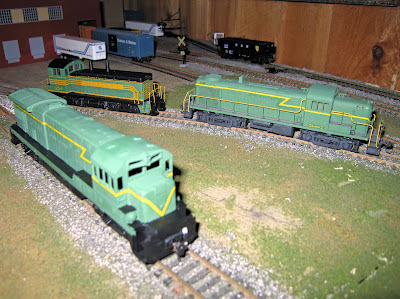 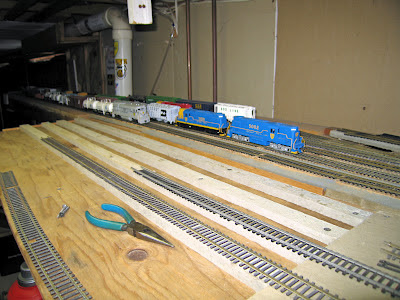 I finally 'finished' Rotterdam Jct staging. There are 4 tracks and although they are short, they should work out since my B&M trains are generally short. Worst case, we can always double trains out of the yard. Tracks are numbered from the front of the layout in both the Rotterdam Jct and Mohawk yards. If/when I come across some more plywood and flextrack, I'll probably run the tracks out to the same length as the D&H staging. 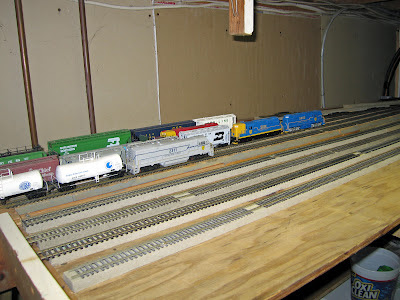 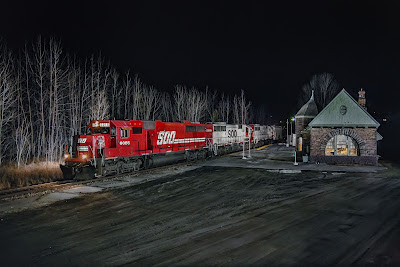 SOO LINE SD 60s have been frequent visitors to the D&H for as long as I have been shooting trains at night over there. They seem to be favored as leaders, that is where I usually see them when in the locomotive consist, on the point. With the entire engine class amounting to 63 units, I rarely saw the SD 60s paired up working together. Only one instance comes to mind where I saw THREE working alone powering a train...................until the last two nights, when CP ethanol train 642 passed through the area enroute to and from Kenwood Yard in Albany! While the previous nights efforts failed to produce a photo on the southbound run, I patiently waited, hoping to catch the returning empties with the same power northbound the following night. My plans were dashed when the job was called for 5 am! It was a predictable situation eh? Rare power lash-up, and suddenly the unloading operation has speeded up to enable an entire trainset to be unloaded in less than a day when it took longer in the past. 5 am was not really promising for night photos LOL! I woke up early twice that morning/afternoon anyway, to find the train was indeed out on the road meeting 696 and 931 at Fort Edward. It didn’t look promising. After a couple hours sleep I got up and went about starting my nightly schedule, scanner on to monitor the D&H, “just in case” 642 was still out there. The talking detectors gave away the presence of AMTRAK and 931 going up along Lake Champlain, but no 642 with its higher than normal axle count! I was beginning to get my hopes up they had gotten delayed some where. Then an e-mail from Richard Wingler arrived. He was taking wife Bonnie out to eat and at her suggestion, took the scenic route to the restaurant................along Lake Champlain...........and the D&H............eventually into Whitehall where they saw 642 sitting on the passing siding, crewless! Oh My Gawd! It was going to happen! I would get another chance at shooting THREE SOO’s working together! It’s a one hour drive at night over to Port Henry from the compound, longer during the day when VIPs are on the highways. Running time for 642 from Whitehall I guessed to be around ninety minutes. The only warning provided of their being nearby is the detector ten miles away at Fort Ticonderoga, so the drama was built-in again as I finished the happy drive over to Port Henry, waiting for the detector to broadcast the 642 train approaching. So what happens? I pull to a stop at the station, and jump out to start putting the lighting together..................and the North End Dispatcher comes on the air.............he is talking to the new crew for 642.............they are still in Whitehall Yard! I was amazed! I never can hear the Whitehall Tower from Port Henry! Educated with this bit of info, I relaxed and went uptown to look for a resemblance of breakfast knowing I had plenty of time on my hands. Several minutes later I went about setting up the lights, in the fading daylight. It seemed very odd, out of sequence! Many early mornings I am taking the lighting down as daylight moves in! Walking in front of the station on the platform got the the attention of several retired folks socializing inside. “Hey! There’s somebody with a light on his head out there!” A woman came out to politely ask what I was up to. “Oh, you’re the guy!” was her reply when I explained. She kindly moved her four by four pickup from the corner of the building improving the scene immensely. She will get a copy of this photo emailed to her. With the lighting set up smoothly and functioning, test shots taken, I had the luxury of doing nothing.........but enjoying the moment, knowing what was coming! And counting my blessings! I was extremely lucky 642 had to be recrewed further south. Announcing their presence, 642 could be heard whistling for crossings to the south, and smiling, I noted they were early according to my prediction, again it goes along with a rare power move! LOL! By now darkness had fallen, temps were pleasant in the low forties as a guess, and the stations inside lights gave the building a very nice “active” look I NEVER had seen before! The group of retirees don’t know how much their presence added to the photo. You hear the familiar sound, slowly building in intensity, becoming apart from the background noise of the town, that of a train coming into Port Henry from the south. The sound carries as the tracks are built along the waters edge of Lake Champlain. As 642 closes in the sound changes, first you notice the rumble that proclaims EMD, GE’s enter town silently by comparison, then the distinctive exhaust of SD 60s reaches the ear. The SD 60 sounds lower in tone than its brethren the SD 40-2, more throaty in its exhaust to me. Appreciating my situation, I conclude that, yes, this is a great way to start my night! With a trio of SOO SD 60’s working alone. Past the last crossing, up around the sweeping curve comes leader 6055 whom I saw last down on Rogers Island leading 451. The engineer throttles back a touch and the three of them glide up past the station into position where in the blink of an eye, the moment is captured! What a sight appears on the lcd monitor! My night is a success already! With Canadian Pacifics rebuilding program for the SOO SD 60s underway, which includes repainting into CP engine red, I can appreciate this opportunity to catch this group together here, on the D&H. Shot on February 14, 2012 at 19:18 with the 5D and Zeiss ZF 28/2 lens set at f2. Special thanks to Richard and Bonnie Wingler! Good idea Richard, letting Bonnie choose the scenic route! Please enjoy! Comments are welcomed.
All The Best in 2012;
Gary Knapp
Posted by Rob D at 5:29 PM No comments: 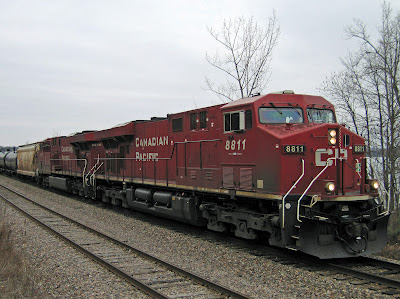 Like I was telling you...I chased this train from Rouses Point all the way to Kenwood and these are the only pics I got. February 3, 2012 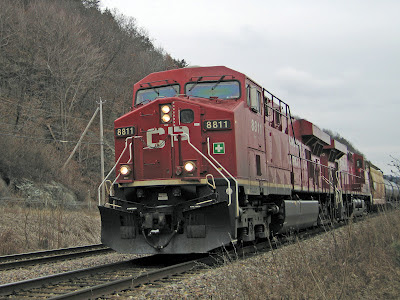 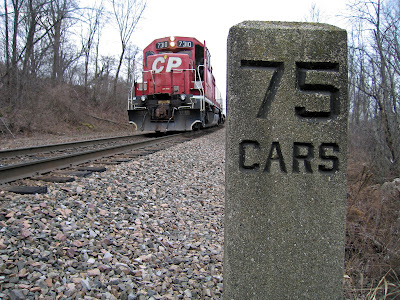 CP 7310 waits near Coons Crossing near Mechanicville. A relic from the B&M days of the hump yard still stands tall. 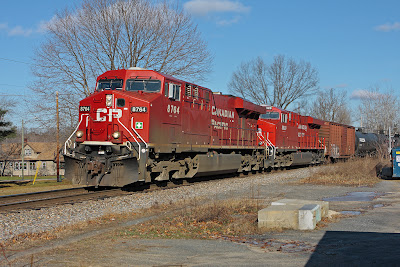 Rob Dennis is the conductor on a empty ethanol train at Ushers Road in Halfmoon, NY.
Posted by Rob D at 4:36 PM No comments: 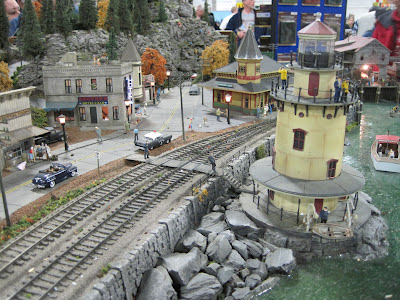 Tina and I went early Saturday morning to the show, had a great time found a few deals. I love the sights and sounds of this show, the best train show I have ever been to. Sent along a few photos...over 22,000 people this year a record! Rob D 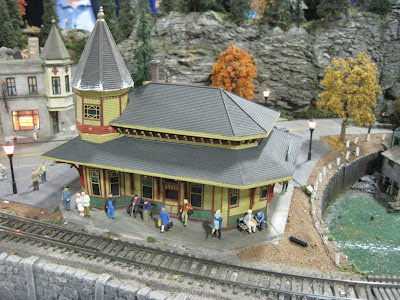 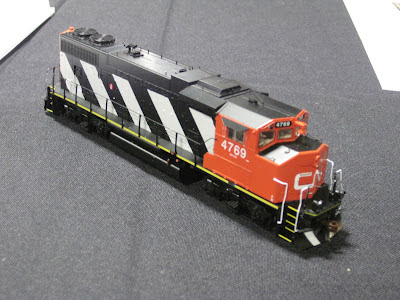 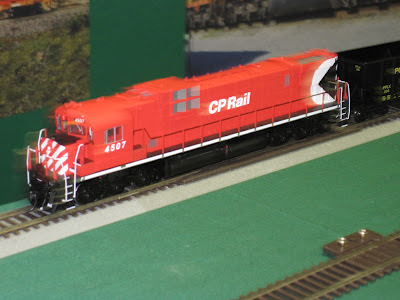 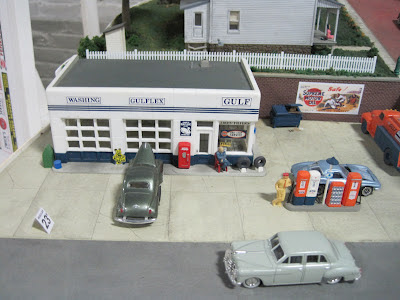 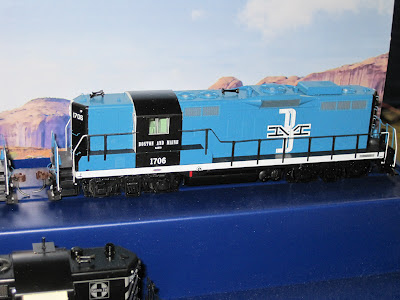 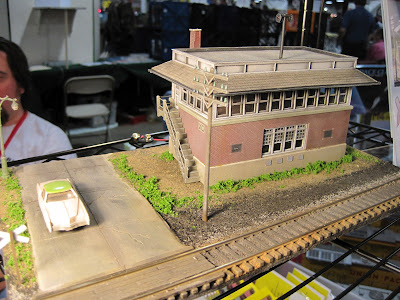 XO Tower from our friends at CH&R Structures . 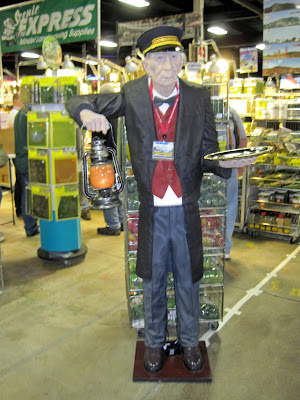 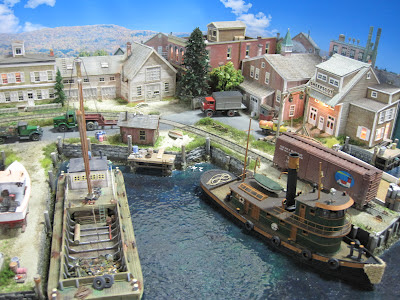 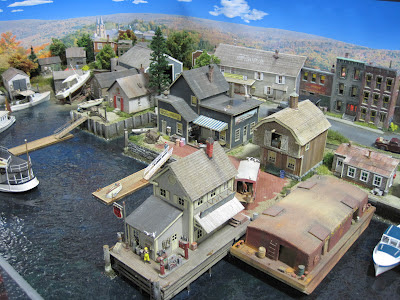 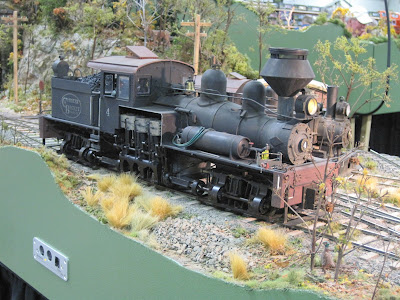 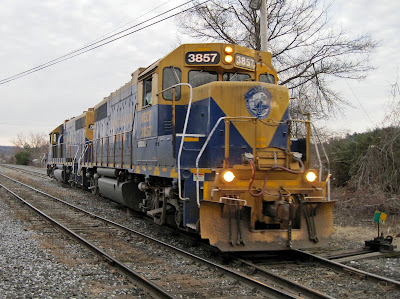 Had lunch with Armand at Plamer at the Steam & Tender it was awesome!
Posted by Rob D at 4:12 PM No comments: