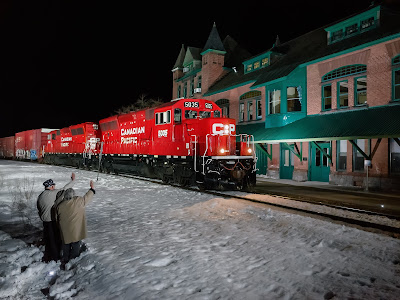 In tonight's night photo we return to Canadian Pacific's ex-Delaware & Hudson Canadian Main at Plattsburgh, NY. Standing in for you and I in the photo are long time D&H railfans Bonnie and Richard Wingler who, upon being promised a “253 by midnight” agreed to drive “into town” from nearby Cadyville to join me to pose in the night photo. They knew what they were getting into, (big smile)! Bonnie and Richard are responsible for inviting me down to Rogers Island in Fort Edward, NY to shoot this gem at their re-enactment campsite: https://neverhomeboy.smugmug.com/Canadian-Pacifics-Delaware-Hud/i-tD66hqC/A in Sept. 2010. Tonight marked the first time we had met up in over two years!
The reason behind our “rendevous” was the pair of 5000 series rebuilt SD-30 Ecco units powering 253 tonight! This was thought to be the first time a pair of the attractive rebuilds have worked on the D&H together. We are all for this becoming an operational pattern! LOL! Run the Ecco units on the short run from Montreal to Saratoga, NY and save the GEs to go west! The Winglers drove in tonight as I was finishing the lighting around 21:30. We did the required test shots, Gary did his tweaking of the lighting, and the new owner of the station building came out to see what we were up to. He liked how his new home, the station, looked in my test shots! He will get copies yes!
With 253 normally departing from Saratoga, NY at 19:00, we knew we could expect to see them here anytime after 22:30, depending on work enroute, etc. We talked by our autos as 22:30 came and went, and 23:00. But we heard a garbled transmission on the car scanner which we took for the defective equipment detector south of us at Port Kent, and some twenty minutes later we heard more garbled talk which we deduced to be 253 working nearby in Bluff Point Yard. After several minutes of talk silence took over, and we took up positions, crossing the track wading through the snow, only to hear after several minutes 253 talking with the dispatcher. Ok......NOW we concluded they are on the move! Bonnie thought how we should hear 253 whistle for crossings south of us, and I thought to myself, yeah right, not tonight........because we are in here! LOL!
Maybe ten minutes pass by as we listened for the approaching 253. The reason for our attention was how they come around a blind curve, over Dock St. crossing, and down past us at the station with an allowed track speed of thirty mph. You need to be ready. I think I hear ‘em! This proved to be a railfan failure, LOL! Then several minutes later we hear the distinct, but faint rumble of EMD prime movers. Suddenly the quiet is broken as crossing signals activate up at Dock St. An air horn sounds out blending in with the bells at the crossing! And CP 5035 emerges from behind a building on the blind curve, I fire off the lighting as they cross Dock St. I’m judging 253s speed as he rolls in on us, the engineer gives us a short toot just before 5035s pilot plow passes my mark! Yup! It looks like thirty mph to me! After shooting Pan Am Railways for several nights this is fast! LOL!
The lighting does its thing and I check the image as it comes up on the rear of the camera, then out of habit turn to give a wave to the head end, now several car lengths past me! Having shot this scene many times with the Canon 5D in the past, tonight surprisingly marked the first time I have shot with the Ricoh GR here! I am smiling after seeing the results! We three migrate back over across the track to the autos where we visited for a while then Bonnie & Richard headed for home. I stayed to see what 252 had for power coming across the border into Rouses Point, (just in case) but they had a GE, so I collected the lighting and took off. Shot in Plattsburgh, NY on March 20, 2017 at 23:40. First day of spring! We are holding off on planting gardens.....for now. Please enjoy! Comments are welcomed. 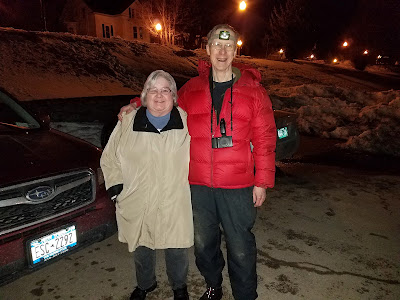 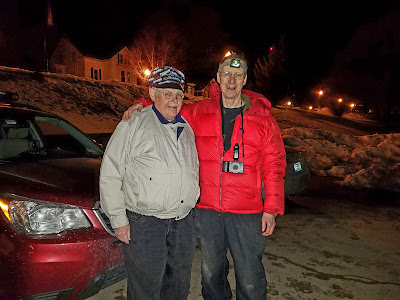 Bonus photos are included of myself with both Bonnie and Richard! They deserve to be publicized! Not all my railfan friends are willing to pose in my night photos. You know who you are, lol! Special thanks to Bonnie and Richard! By the way, the tiny point and shoot hanging from my neck in the photos IS indeed the $550 Ricoh GR! With Pocket Wizard transmitter attached to the hotshoe. An amazing camera/lens combo!
All The Best In 2017;
Gary 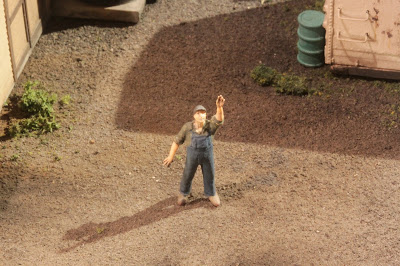 Many decades ago Weston had a figure they called, I believe, "Flexible Man" or something like that. I'm thinking this Preiser figure can be "Universal Man".

In Chapter 8 "The Gulliver Effect" covered how I alter figures for specific "needs" but, this little fellow wasn't so much altered as he was used for a variety of specific needs.  I think most of you saw when I used this guy as a man waving.  Many of the visitor groups even got to see him wave good-by via email after you left and returned home.  He was thanking you for your courtesy.
I've used the same figure to adjust the mirror on my trucks and now, with an easily made prop he hands up train orders.  I attached the "prop" with Elmer's so it can be removed easily when using the figure for other needs or to return him to the adjuster of truck mirrors.  And, yes I know I have to have the fireman reaching from the cab to retrieve said "orders". 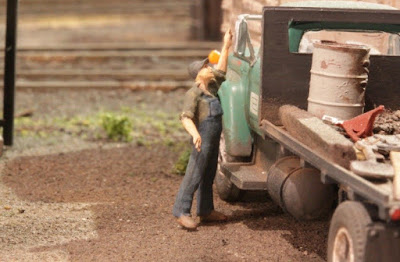 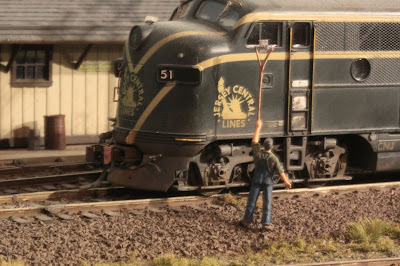 I kit-bashed a fireman to grab the orders.  I couldn't get the factory installed windows out of the CNJ F3 so I substituted another F3 to complete the scenario. 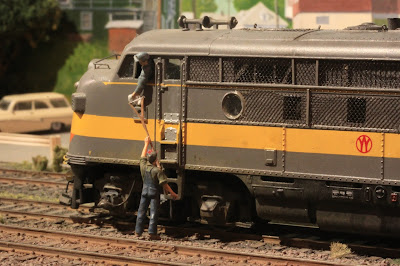 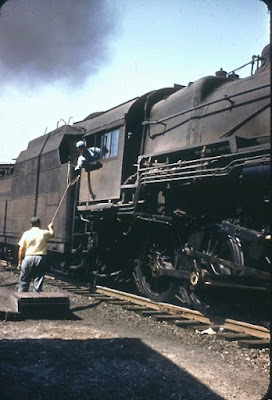 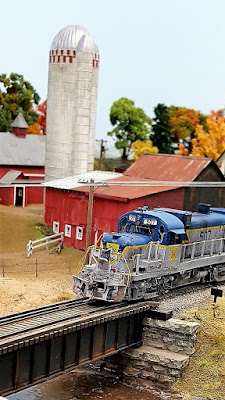 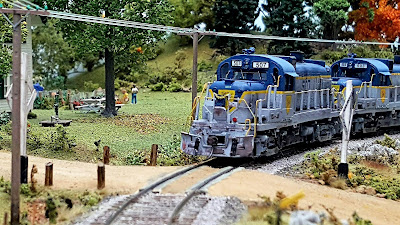 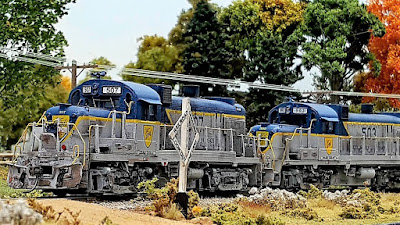 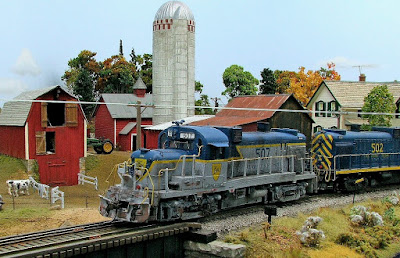 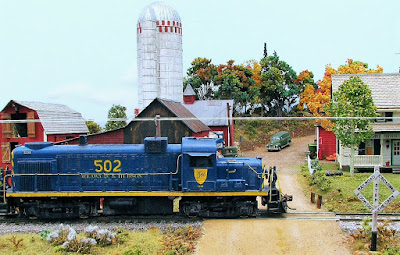 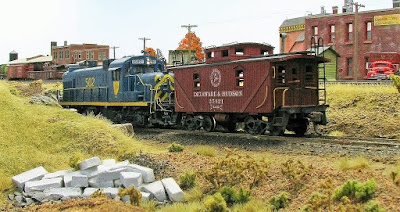