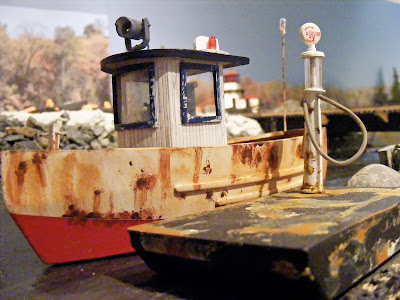 The Wiscasset,Waterville,& Farmington in On30 is coming along. The fishing boat and fuel dock are on dry land until the water is done. 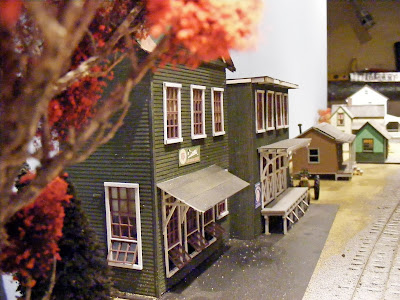 The town will be representation of Sheepscot, some of the buildings are laid out. 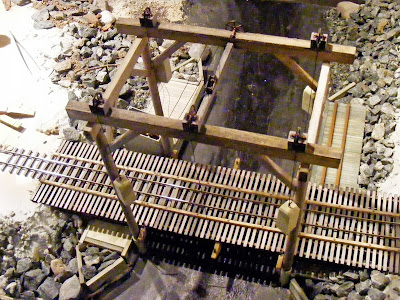 Lift bridge is a what if...... to the left of the bridge will be Wiscasset. 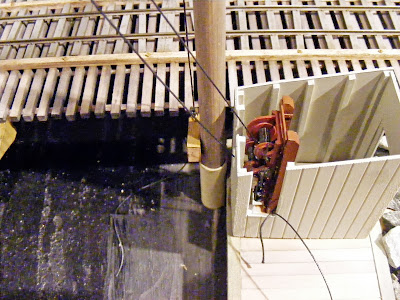 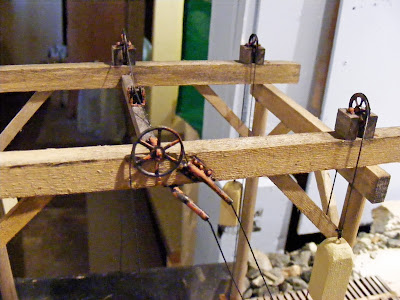 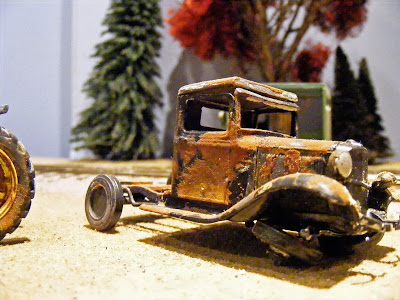 Lee Schamberger
Posted by Rob D at 12:23 PM No comments:

Crates of tie plates...in the AC 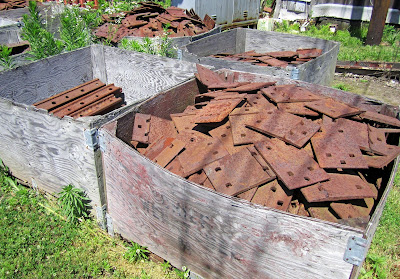 Something, anything, to do indoors in the AC. Did I mention humidity and mosquitos as well as the 93 degrees? I had fun doing these crates of tie plates inspired by one of the "junk" photos I took in Ringos on the BR&W. They'd probably look better in S or O but, they seem acceptable in HO. N, probably not.
Any of you remember E. L. Moore and his leaning, saggy roof buildings in old RMC's. Making these plywood creates reminded me of his articles. 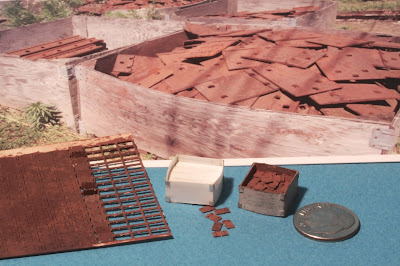 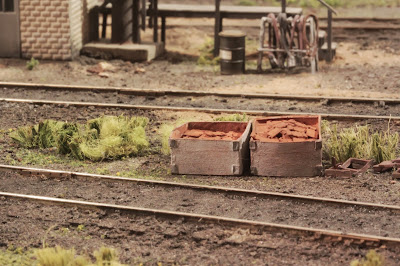 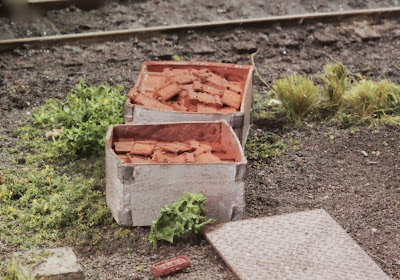 Just pieces of styrene from the "everyman's" scrap box.. The sides are .010. I should have used .005 for the galvanized corner braces instead of the foil from the yogert container left after lunch.
Wayne Sittner
Posted by Rob D at 10:26 AM No comments: 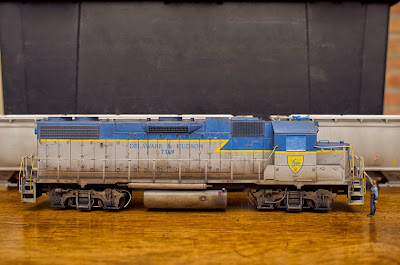 I spotted D&H 7309 as a kid with a hand-me-down 35mm camera one day while walking the tracks in Cohoes. About 15 years later, I shot it again in Troy. This time, it was in CP paint. I figured I may as well model it in both schemes. To keep myself sane, I did the D&H unit as 7309 and the CP unit as 7307. 7309, in D&H lightning stripe was easy. I found a Proto2000 model that closely matches the prototype. Done!

My model of CP 7307 was a little harder. I ebayed a Atlas 'Trainmaster' gp38. The first order of business was removing the numbers with a wet pencil eraser and replaced them with new decals. Next, the horn got removed from the front of the cab roof and replaced it with a casting at the proper CP location on the long hood. A GP-38/40 grab iron kit from Bowser was used to replace the molded on details which had been carefully shaved off. I painted them on the model and used a bit of thinner to bend the new paint into the old and to cover the areas a scratched while removing cast on details. I used a brass stanchion kit to replace the thick plastic railings provided. The model's anti-climber was removed and replaced with a thin brass L shape to closer match the prototype.


7307 had its black surfaces lightened a bit using several coats of extremely dilute white paint. Rust was added to the cab roof by applying nearly dry brown paint and following with some chalks. Black was added in the same manner around the exhaust. 7309 got its blue surfaces faded using the thin white paint. It then got its trucks, walkways, and bottom of the long hood dirtied up with some chalk.


Ditch lights are currently missing from both models... the process of running wires between the frame and shell scares me a bit and I'll put it off until these two have some track on the Troy Industrial Track where the can run. 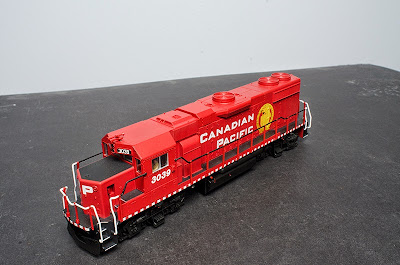 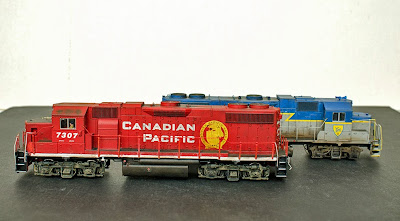 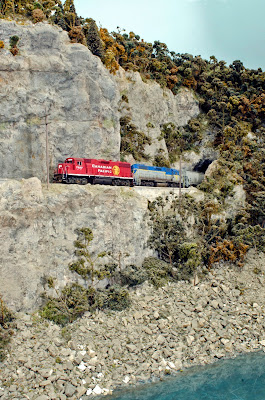 Getting there.... Nearly time for a photoshoot up at the club. Nearly have 7307 (in CP red) done too.
After I get these done, I think I'll be time for the R&S shops. Going to scratch build the front part of the building ... should turn out to be about 12" x 12" and then going to build one wall section for the long building out back and cast/repeat that.. that section will be another 3' long. My great grandfather worked in there and I really loved that building. I only ever saw it as the scrap yard, so I'll build it like that.
I'll have to beat the crap out some D&H gons and I should be set for that scene. 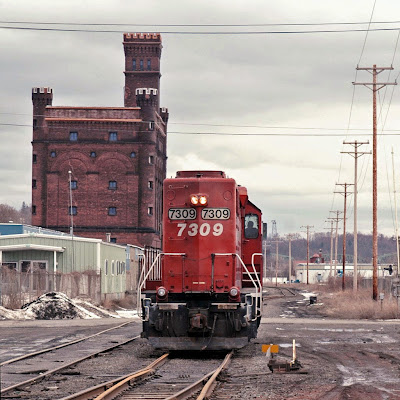 How much would you pay to take a ride on a time machine? 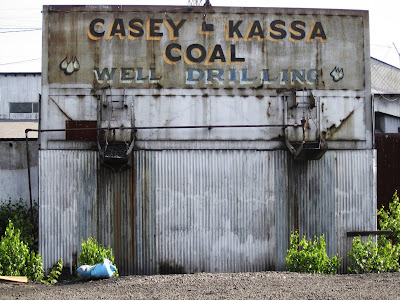 How much would you pay to take a ride on a time machine? I hope these attached photos give you an idea of my ride just this Saturday! I took about 90 ghotos all told.


Our Wyoming Valley group met at 08:30 for a three hour guided tour of this anthracite breaker operation in Laflin. It's one of only 2 left in the Wyoming Valley. The other operation (a bit larger and much more formal) is in nearby Pittston. The run of mine coal that's processed here comes down from Carbondale. You can pick a load up yourself or have it delivered in one of a fleet of trucks. There's no provision for bag coal as is still done at Blaschak in Mahanoy City.

This breaker is a perfect size for those who might model such things. It has everything contained on a site I judge to be no bigger than 8 acres. 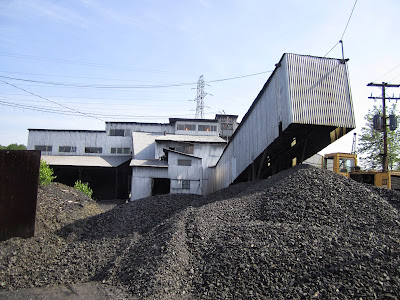 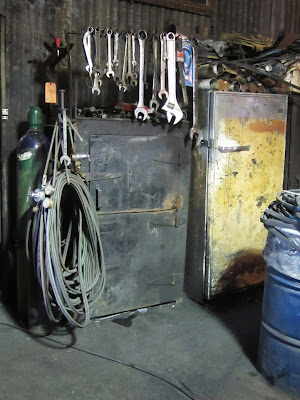 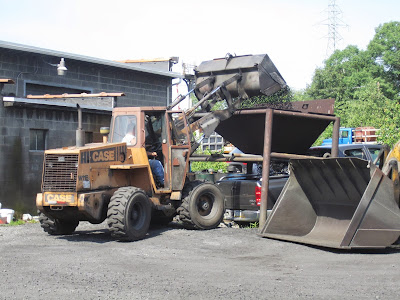 On Sunday our Wyoming Valley (rail) Historians Group and a few selected invitees had an all day charter to ride behind the last engine in original LV paint.
The time machine ride continues! We arrived a bit before 11:00 AM and were treated like royalty by Scott (112's owner) and his crew. There was a bit of switching to do along the line and there were had several photo run-by's on the out and back. I took another 90 + photos on the day which finally ended for me at about 6:0PM. 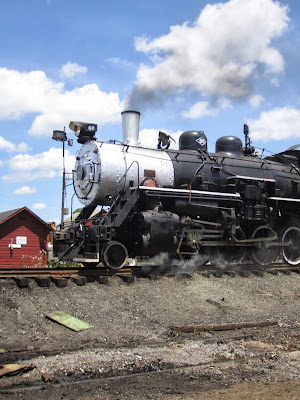 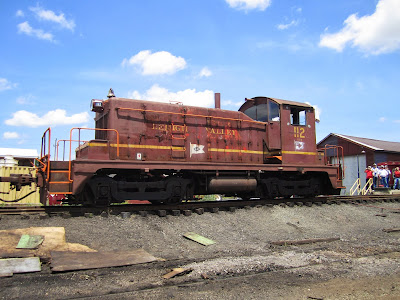 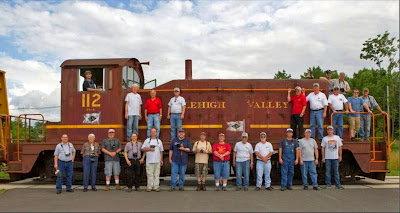 I hope you enjoy me sharing my good fortune. It'll be tough to come up with a scenario of equal value next year!


Best to all,
Wayne Sittner