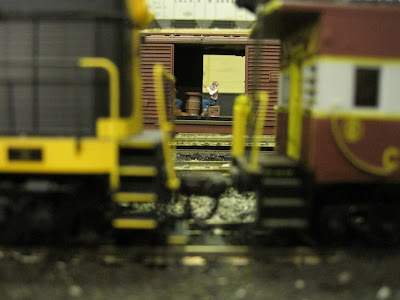 The Cheshire Line, is the layout of Robert Gould, who, interestingly enough, lives on Cheshire Place. The layout is a freelanced layout styled along the lines of the Erie-Lackawanna Railroad on its trek from New Jersey to Chicago; passing through some of the same cities. It is a loop around the cellar layout with some built out areas for industries and cities, rail yards and staging areas. 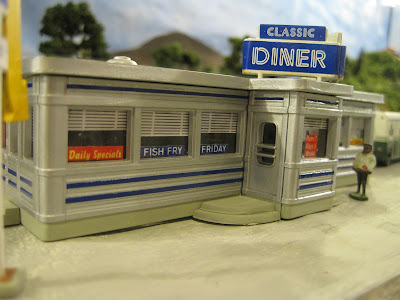 This is not Rob's first layout. He received a Lionel train at eight years old and it wasn't long before his uncle and dad built a platform on which he could set up the trains and add details. His uncle had a large Lionel layout that provided considerable inspiration. He has built a couple since. Although this layout was started in August of 1981, it is only within the last couple of years that he has had regular time to work on it. Rob has had full-scale railroad experience, having worked for the D&H, CSX, and now as a railroad inspector for the State of New York. 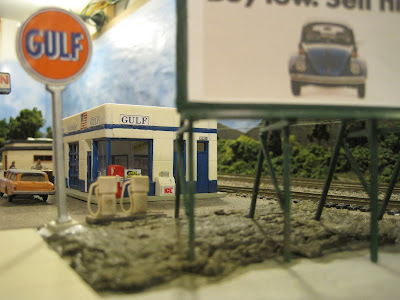 Robert uses a Digitrax system with circuit breakers for six districts. Although he doesn't have regular op-sessions, he still has a car card system for directing and monitoring car movement. And he has a lot of cars – well over three hundred – so yards and staging areas can easily become clogged with rolling stock. He has a couple of large wall-mounted cabinets for handling extra cars and engines, but there is now more than they can handle, too. 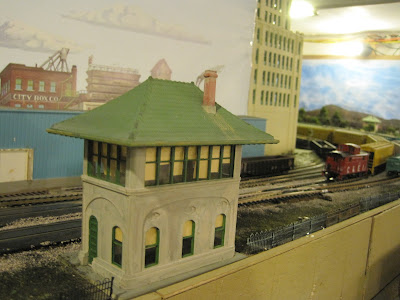 There is plenty of freight traffic moving through on the adjacent mainline tracks and it is being faithfully watched over by the old switch tower. 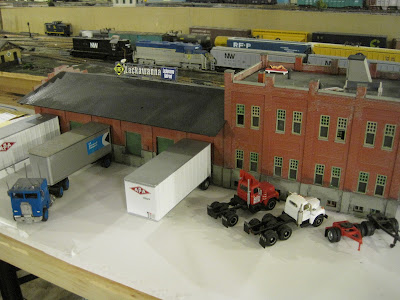 An Erie-Lackawanna freight operation is busy with contract freight and items that are too big for UPS. That cab-over tractor was typical of the period and the location. The long frame was used mainly in the mid-west. 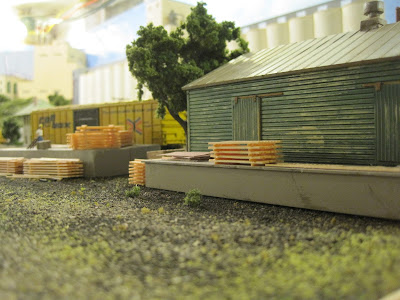 Having enough coal cars to run a forty-seven car unit coal train adds a lot in itself. And to get all three hundred plus cars to work well together, he recently went through the process of aligning all coupler heights and replacing all axles with ones with metal wheels. He says that this has made a great difference as the cars can be pulled so much easier and do not string-line on curves. 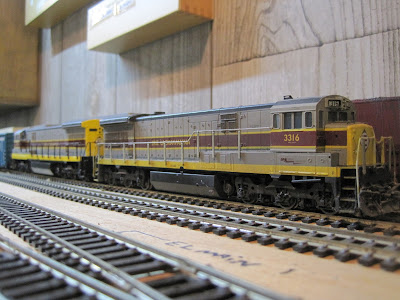 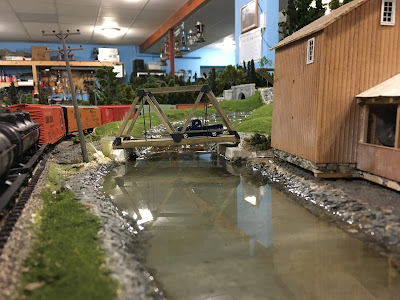 A view of the river going through the sawmill. 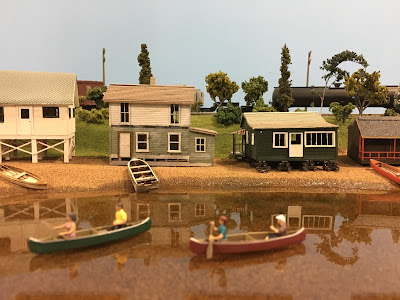 Grandpa's camp on Lake Champlain next to the D&H. 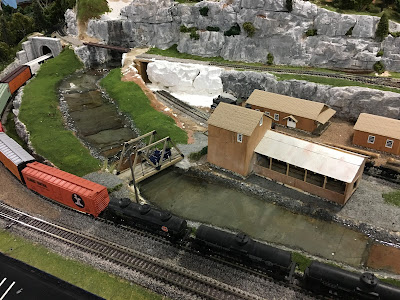 Overhead of work continuing on sawmill. 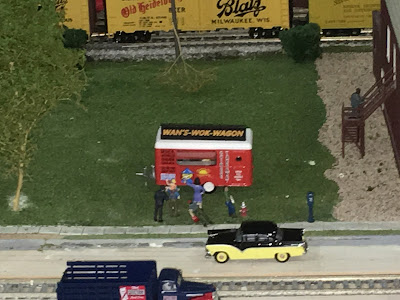 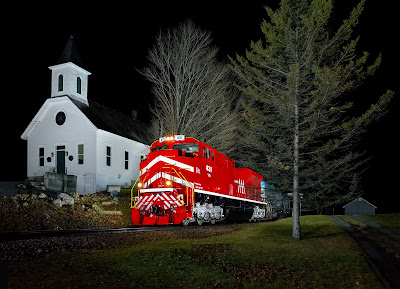 The first night photo of 2017 is taken on Friday the 13th of January, on a full moon night, in the rain outside the Green Mountain Baptist church in Center Rutland, Vermont. Vermont Rail System (VRS), has applied the finishing touches to one of their two ex-Florida East Coast SD70-2Ms, 431, that has been repainted by the shop forces on the Providence & Worchester into VTR red & white! The white part being striping and lettering applied in Rutland. Once 431 emerged from the Rutland enginehouse with its white striping and lettering, fortunately for me (and you) the unit was turned on the Rutland wye to face east! This move made it possible to shoot it going past the church in Center Rutland, one of my favorite locations! I’ve been saving the location for the return of 431 over the past month or so!

I thought of Winston Link when 431 made its debut run over to Whitehall and back the previous night, LOL! I was just starting the drive down to Center from home, when I learned the crew was already headed back eastward just after midnight, light power! I was too late. So tonight I headed out earlier, leaving around 22:45, arriving at the church at 00:15. And this night the crew aboard 431 came by after 04:00. Winston, in a video done of his work at night, had lamented during an interview about how the unpredictability of freight train schedules became an accepted risk/part of the hobby, LOL!. Some photos he took required several consecutive nights before he got a chance at taking the shot.
Tonight, I am all set up by a little after 01:00. The weather is outstanding for a night photo, windy with temps in the forties in January! It deteriorates as the hours pass into a steady light rain with temps falling into the low thirties. Still excellent for a night photo and that is what matters! Ratty weather for humans produces great night photos of trains! After 03:15ish I hear the CLP 263 job departing from Whitehall on the car scanner. I do the usual tweaking of the lighting to keep moving around, not that it needed it. Being careful not to do something I’ll regret, lol! Around 04:00 I hear an air horn, but from the wrong direction! It belongs to the VTR GP 38-2 201 leading the job going to Burlington coming out of Rutland to meet the Whitehall train at Center. Several minutes later I hear 431 coming in from the west, blowing for crossings in West Rutland. I’m thinking how this could be spectacular! Visualizing the 431 wearing VTR red & white at this location.
Atop the stepladder, I hear 431s engineer blowing for the Rte 4 crossing, then a secondary road followed by silence as the train climbs Boardman Hill toward me. Finally I see brush trackside below the church start to lighten up, I fire off the lighting, and watch. Headlights appear behind the evergreen in front of me and I look away at my mark, then as the 431 starts to follow the curved track to my left I look back and watch as the pilot plow slowly drifts up and past my mark. I wait a second then fire. Red and white reflects back! Wow! I give conductor Dominic Cioffi a wave as his side of the cab passes by, the dark shape of 431 towering above me. Then I check the photo on the GRs monitor.............Holy Cow! Dosen’t 431 look great here? Glistening in the rain?
This historic trackage, incorporated as the Rutland & Whitehall Railroad in Nov. of 1848 before being acquired by the Delaware & Hudson, who would eventually sell it to VRS subsidiary Clarendon & Pittsford, saw all the exotic D&H diesels passing by the church here, RS-3s, PAs and the Baldwin Sharks to name a few models. The 431 certainly fits right in tonight with the addition of the evergreen, which I’m sure is a recent improvement to the location! SHot in Center Rutland, Vermont on January 13, 2017 at 04:11. Special thanks to Michael Ricketts! Please enjoy! Comments are welcomed.
All The Best In 2017;
Gary Knapp
Posted by Rob D at 1:11 PM 5 comments:

"Inch At A Time" Chapter 22 - Modeling Piles Of Old Ties 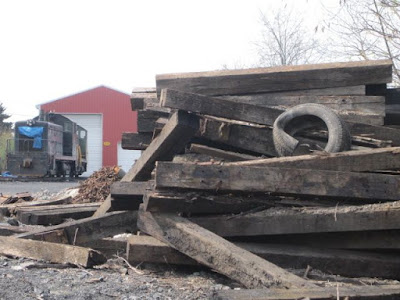 While I don't keep up much with manufacturers offerings I don't think anyone's come up with this commercially! 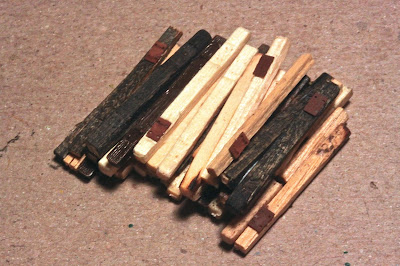 Over the years I've photographed many piles of discarded ties.  I've found that, while they differ in size, texture, condition, etc., they do share some commonalities.  And, they're oh so simple to recreate in model form. 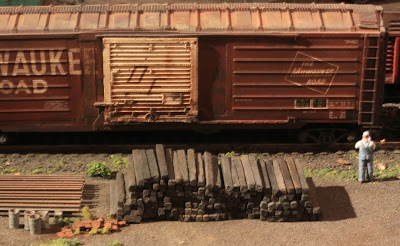 After looking through my slides and digitals of prototype "piles" - I settled on the ones found in Saugerties, NY (along Conrail's West Shore line) and Pittston, PA (along the former Lehigh Valley) as my guides. 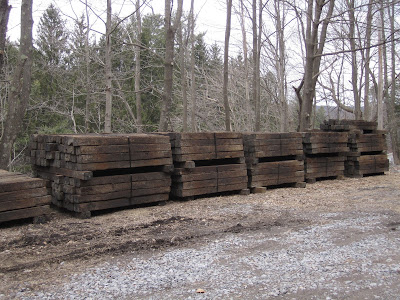 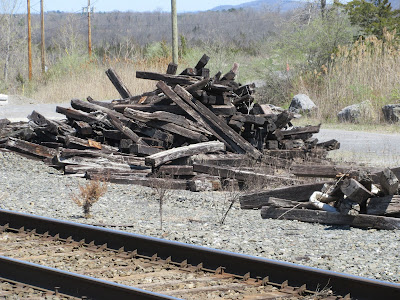 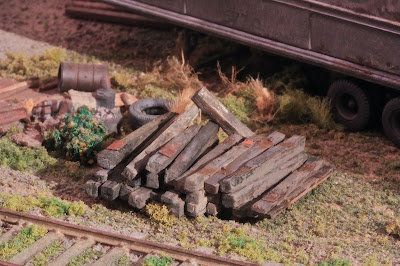 I did add some Campbell per-cut ties but, mostly I used old wooden matchsticks I cut to proper length.  If your wife burns as many candles as mine you could accumulate quite a lot of the 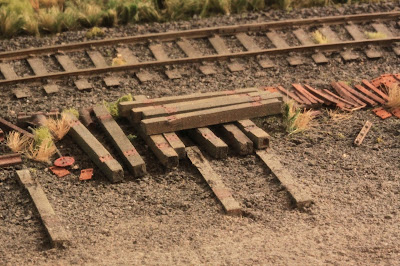 I made the impressions of removed tie plates and spike holes in some.  For a few, I attached Monster Model Works tie plates to represent the few that were left in place..  Everything was glued together with Elmer's Glue-All before painting/staining. 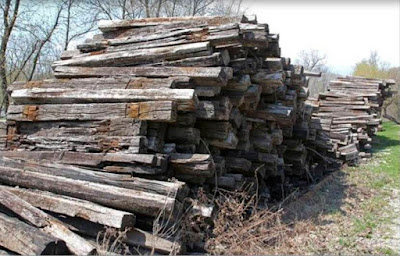 I trust the photos work well as a guide if you want to include yet another of my prototype observations on your layout.