A Photo Run By

Erie Lackawanna ACX-99 has departed Croxton at 5:30am bound for Chicago,
seen here passing through Cheshire Jct. in July 1975. 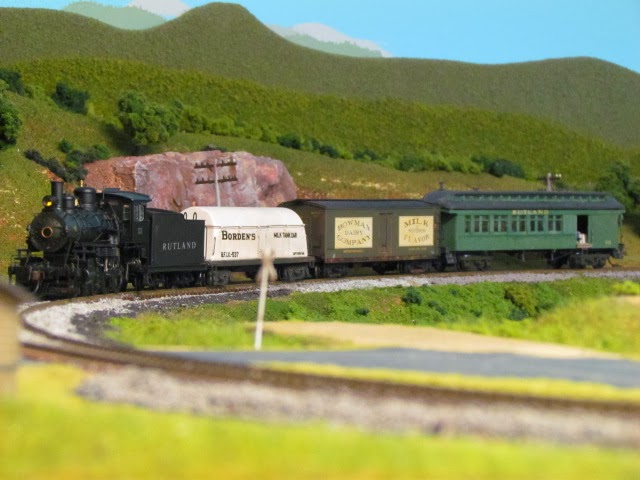 The SVRR's morning milk was pretty light today and ten wheeler Rutland 53, inspite of her age, didn't need any help getting up the grade to Hooper's Curve.
Today the crew is enjoying the comforts of Rutland combine #123 recently acquired from the LP&O RR.

In this photo (above) Extra 53 south has just crested the grade at Hooper's and is coasting over Grant's Crossing and on into Twin Junction Station. In the photo below you can see rear end trainman, Dan Duffy, enjoying the view as he waits to off load a few cans of Hollister milk for the creamery at Twin Junction. 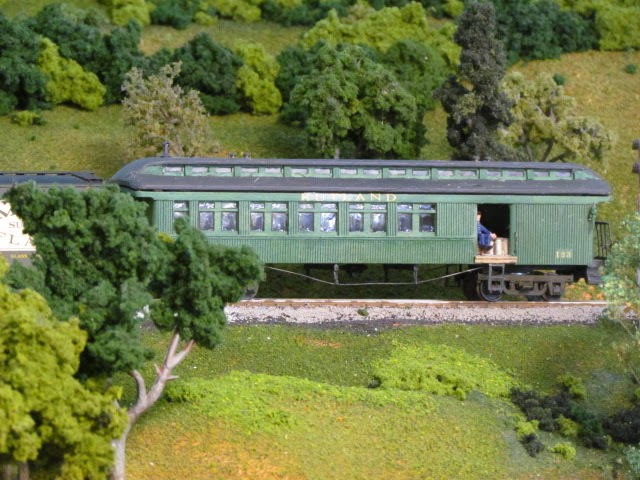 You have to have lots of whiskers to hold the Morning Milk. The crew will spend a good part of their day personalizing their new (to them) combine. Because of the fact that they do, on occasion, get a passenger or two, they can't personalize it too much. Passenger business, on this run, is pretty much limited a few train buffs but every once in awhile a real passenger gets on. 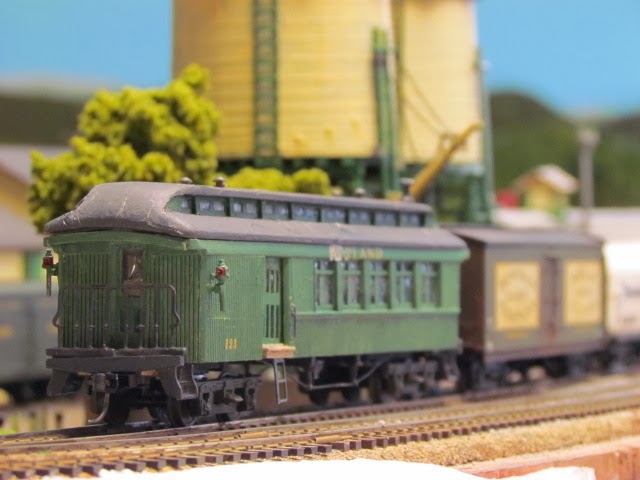 Have a great day and thanks Rick!!!! 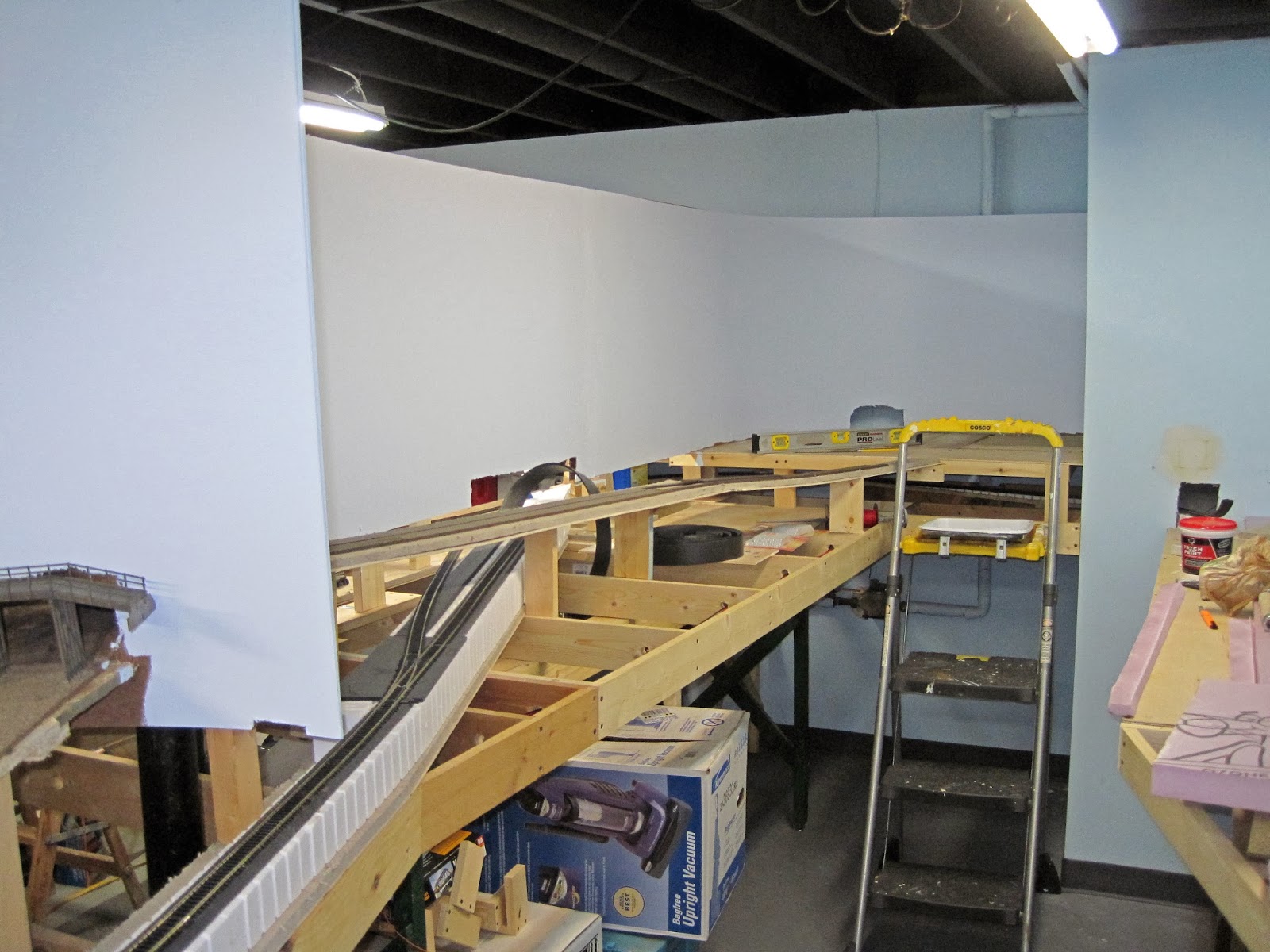 Just a few pics...above is a shot looking towards Newport....backdrops are painted. off to the left will be the paper mill. 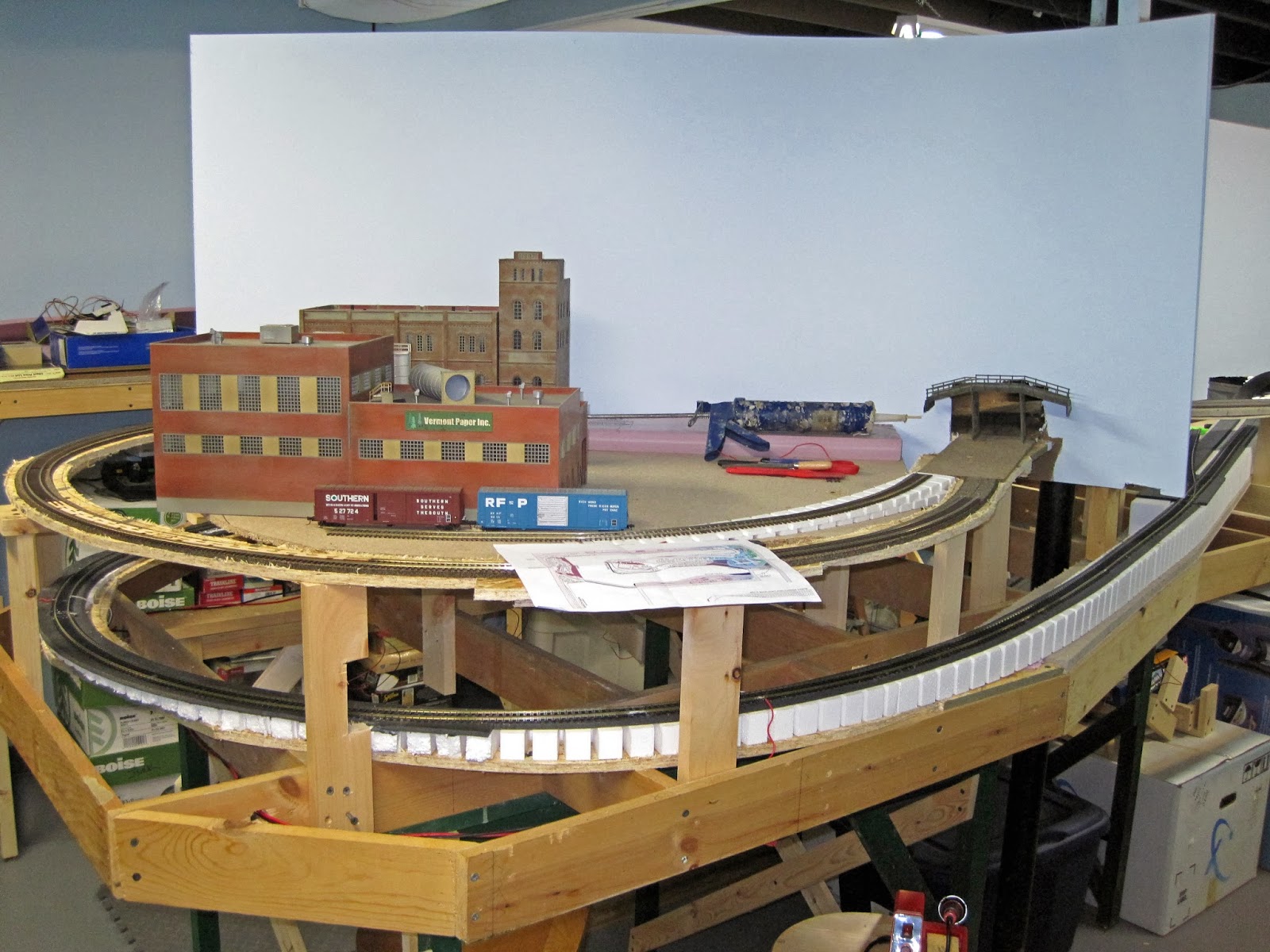 Orleans area of the layout, this maybe Ethan Allen furniture...buildings are just stand ins for now.... 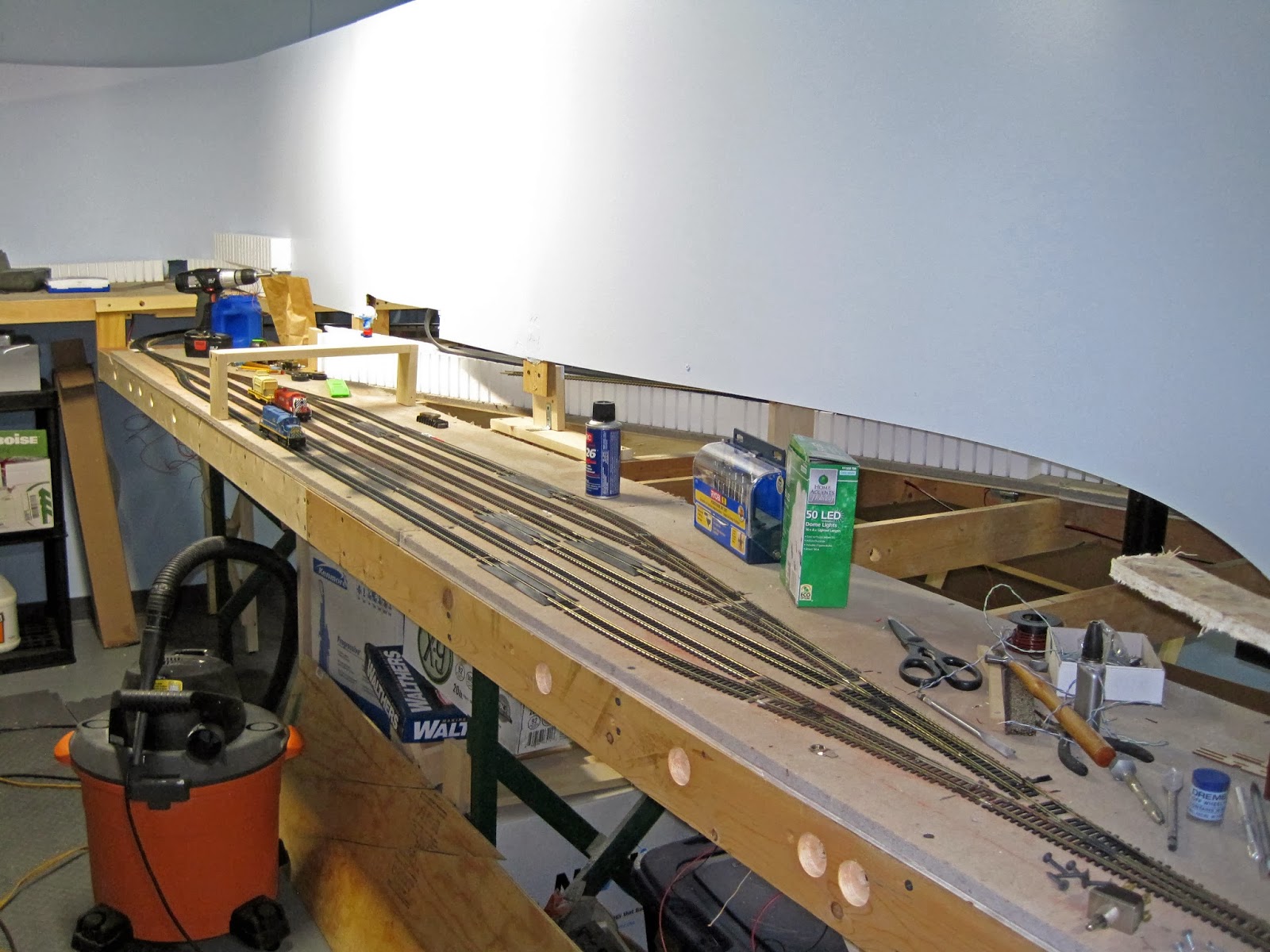 Staging yard is getting close to getting "covered up"....this will be a hidden yard... 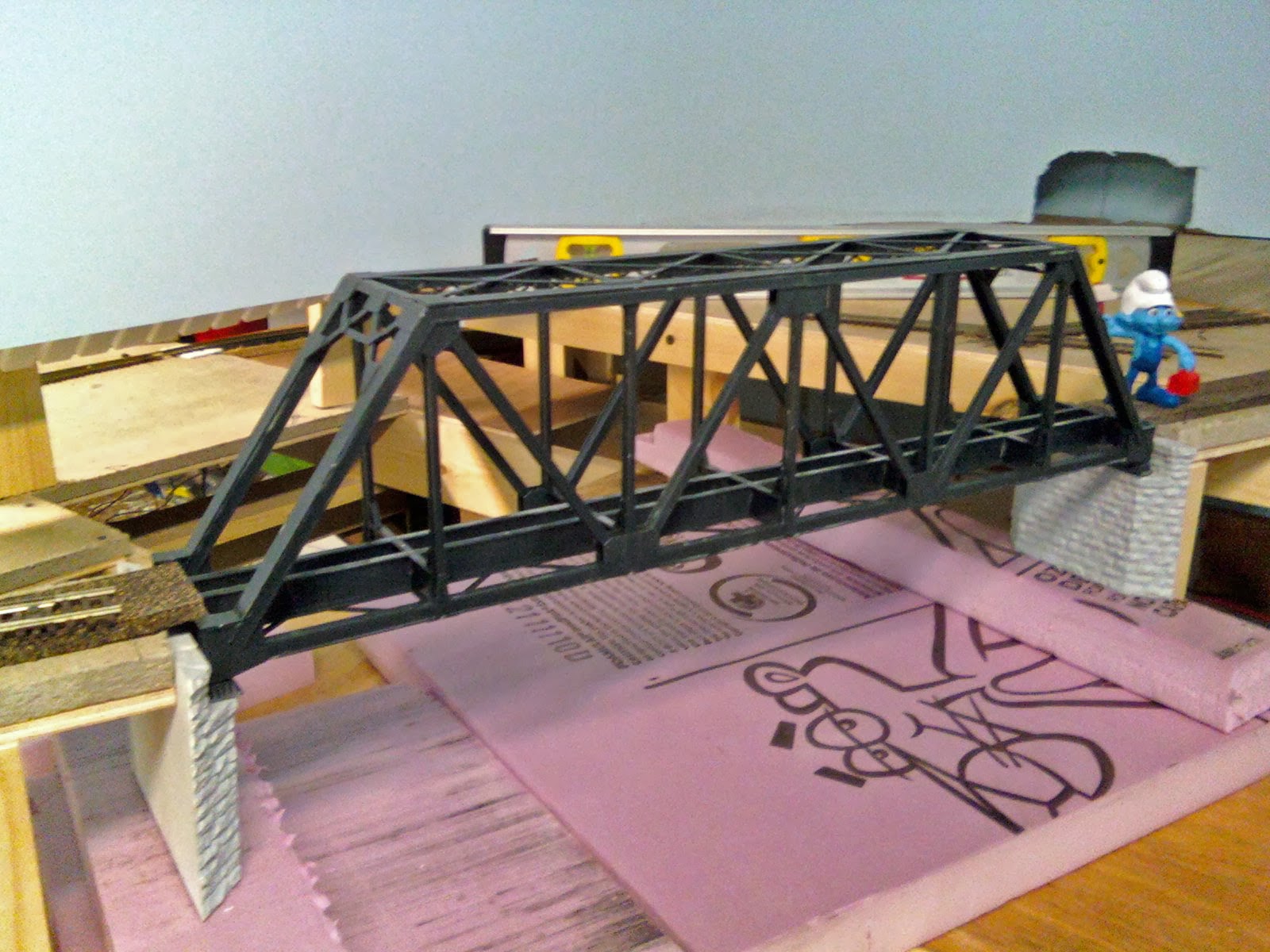 The dry fit for the bridge in Newport....no it's not prototype, but I like this one better...it'll look great weathered up! 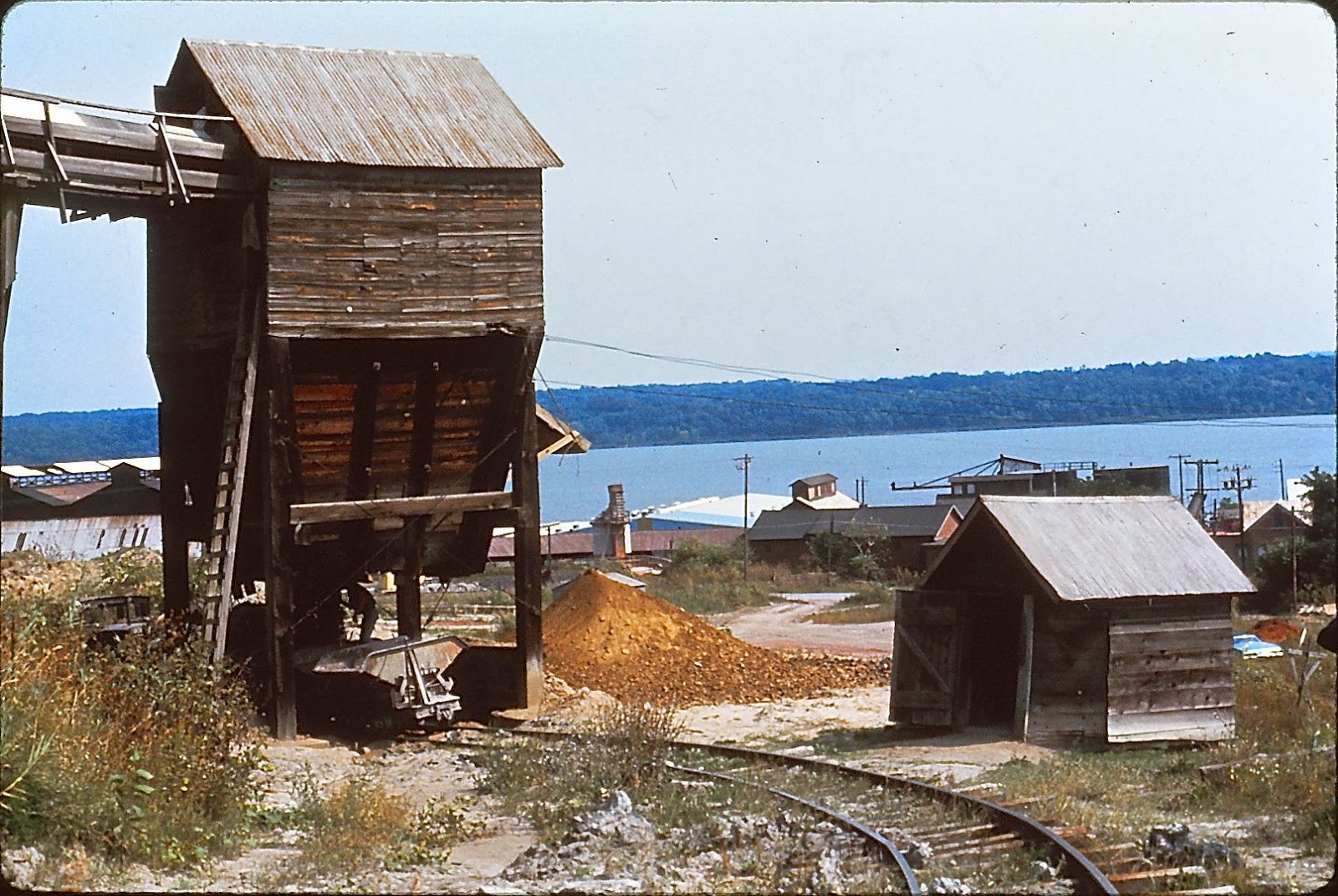 
What do you do when there's a freakish amount of snow accumulated outside?
Get into a freakishly challenging modeling project of course.
I've thought about modeling this operation ever since I first encountered it over 40 years ago. Hutton Brick was located on the Hudson River in Kingston, NY. In addition to the forming buildings and kilns there was an open clay bank (think strip mine) that was accessed by a narrow gauge railway. Two gas mechanicals, a Plymouth and a Vulcan, were used. The finished brick was shipped out by barge but, there was a branch of the NYC (PC) that crossed the property on it's way to serve the Independent Cement Plant. I used to pass both these operations every Friday while going to a work assignment in East Kingston. Thankfully I managed to take some pictures over a period of a few years. Ultimately I'll build an operating diorama in HOn30. Here are the first steps to that end: 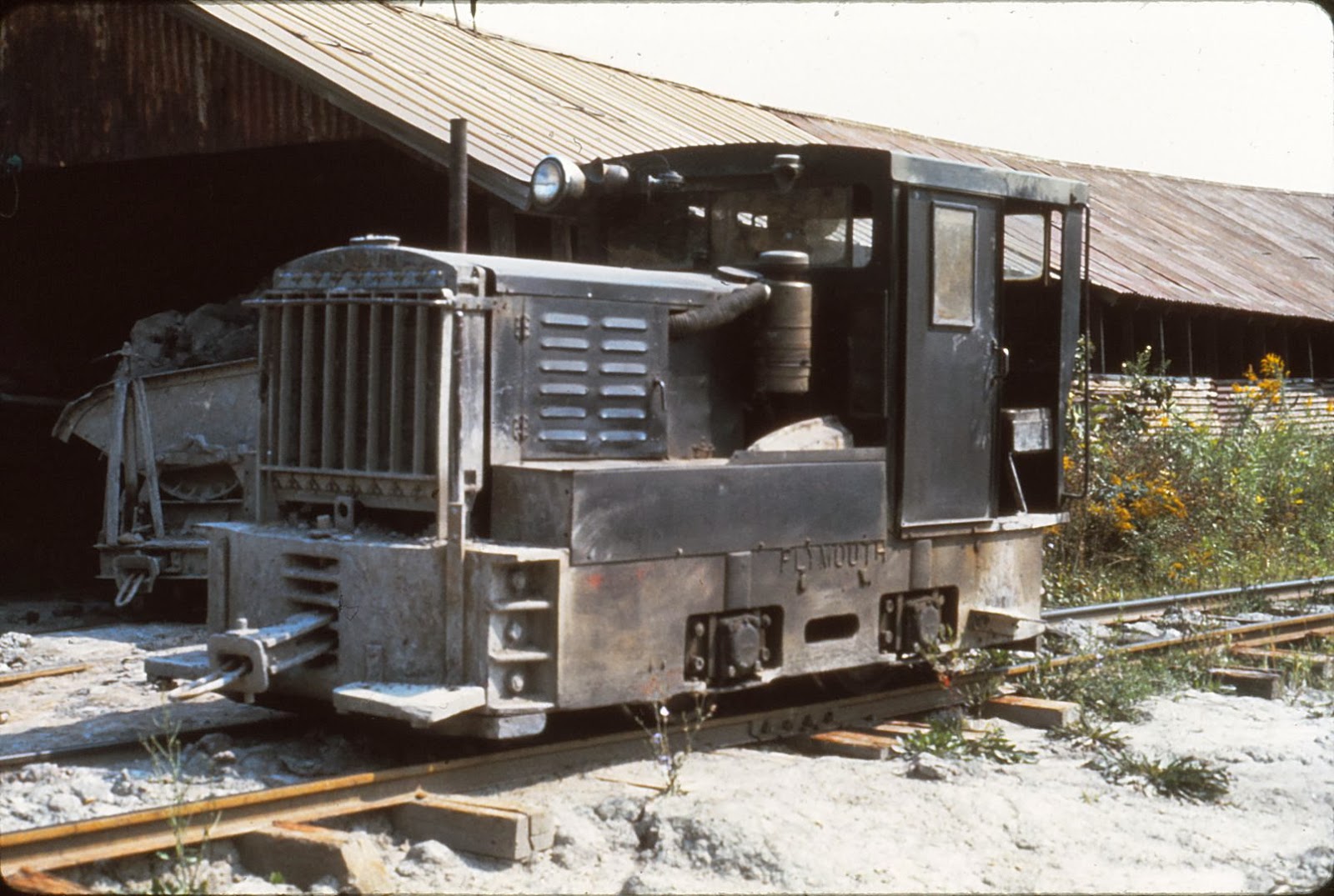 The Plymouth is a moderately enhanced MinitrainS (BCH International - Johnstown, PA) R-T-R model, while the 4 side dump cars were finally made available in a matched set. The loader is totally scratch built from Evergreen styrene I had on hand. (reminds me of a #97 Lional loader) It may not look it but, for it's size, it was quite a challenging project. Getting the geometry right took some effort. With Floquil unavailable, I have to find a new paint supplier I'm comfortable with in order to finish it. 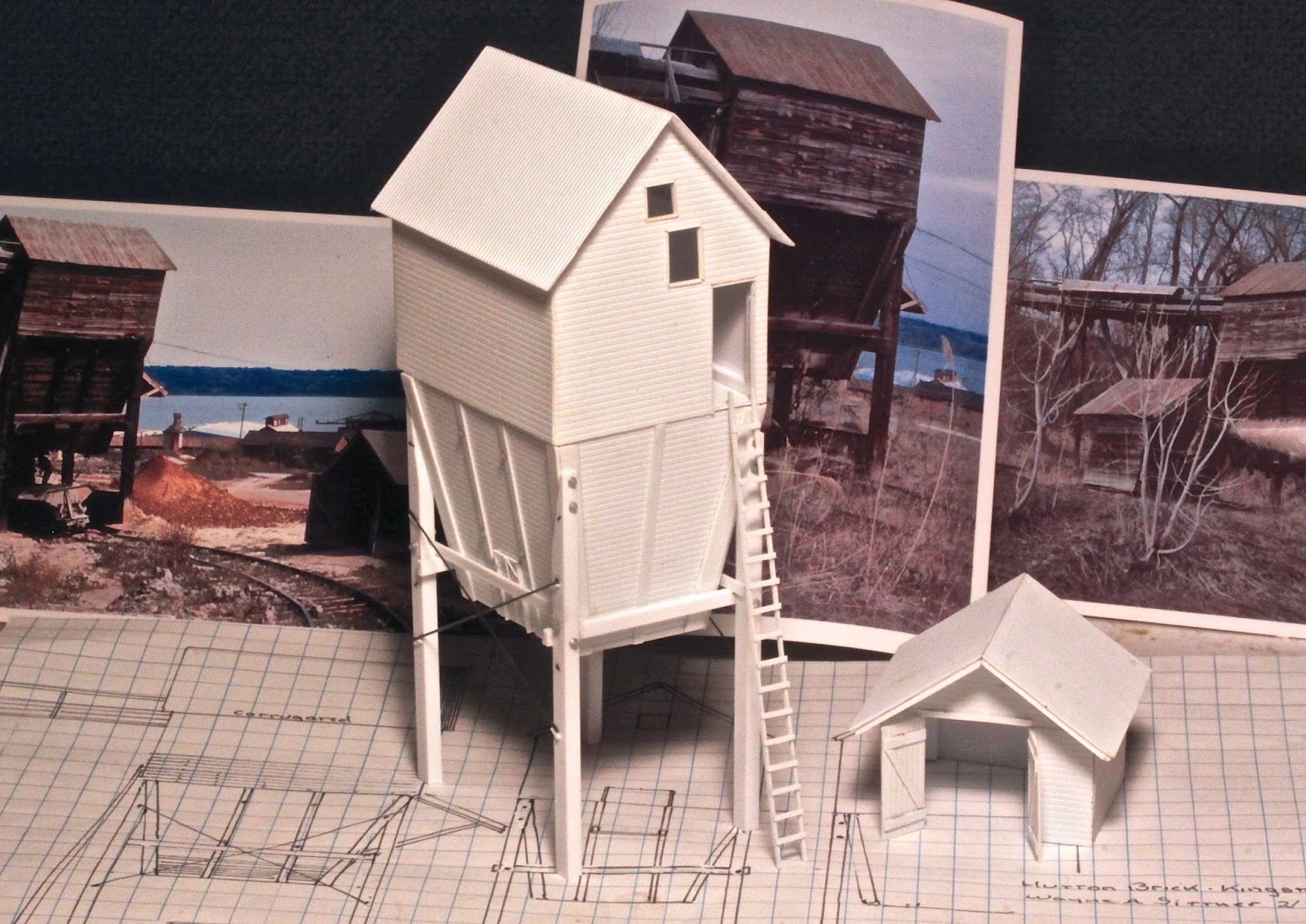 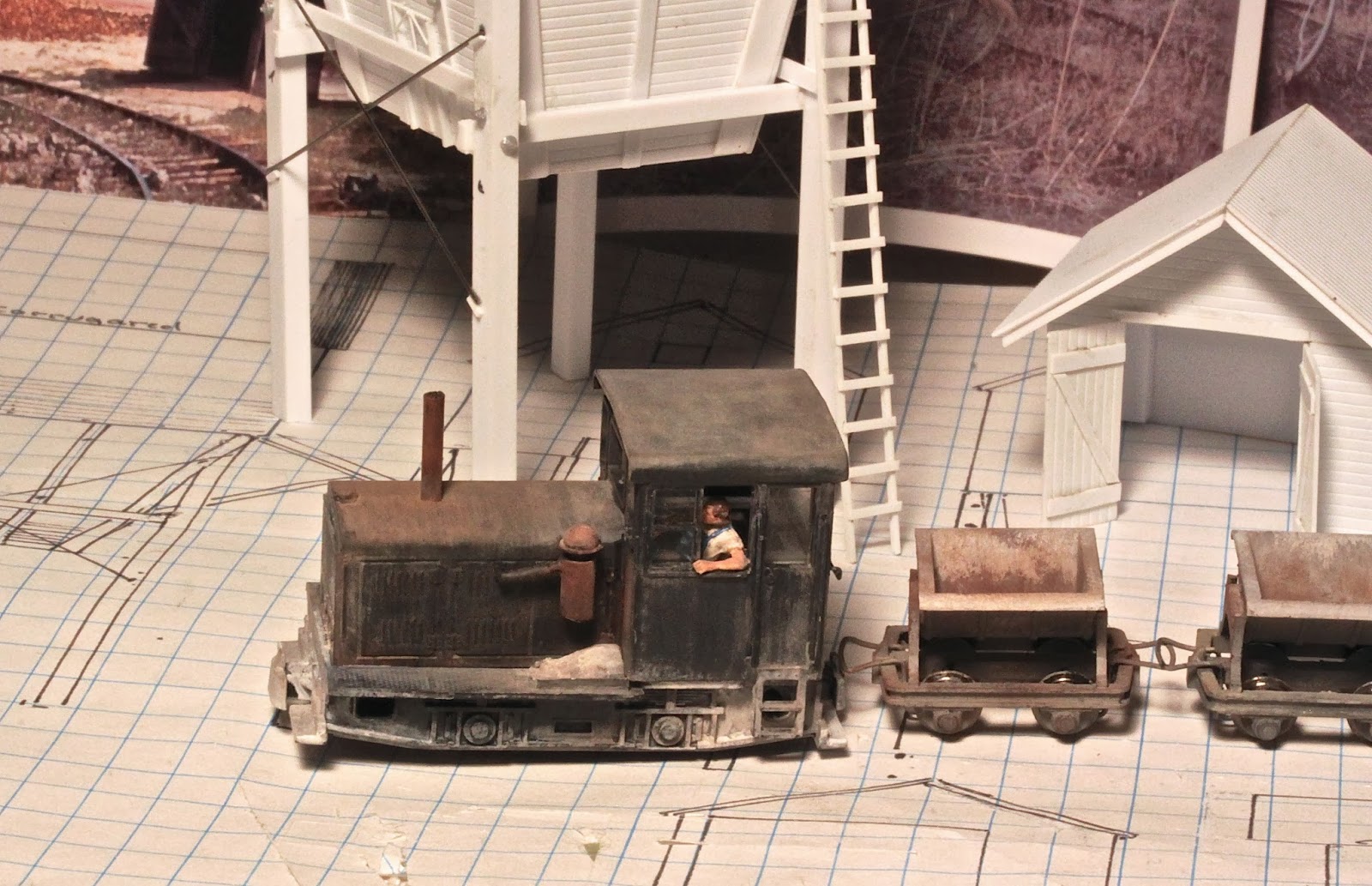 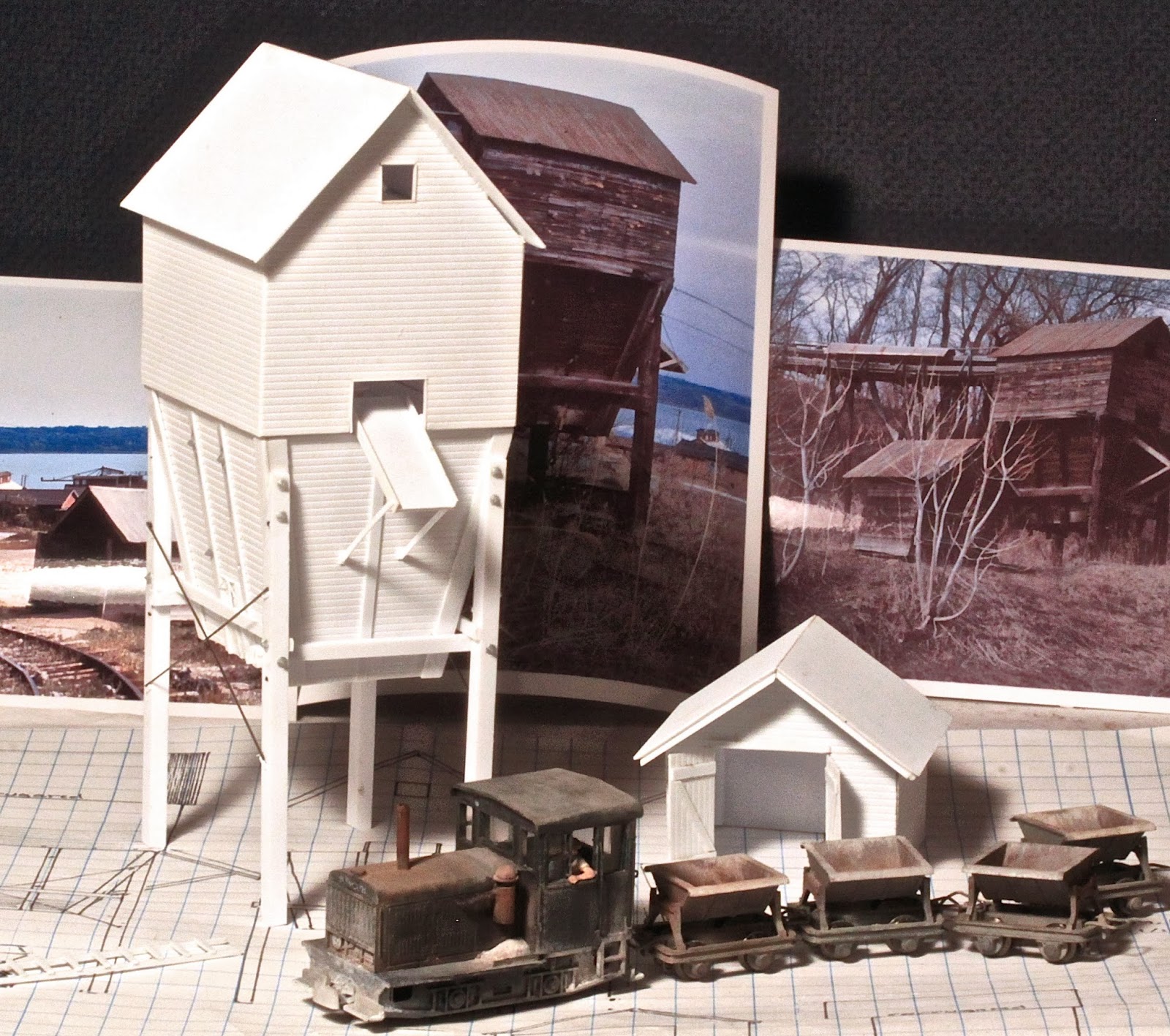 Wayne Sittner
Posted by Rob D at 2:33 PM No comments: 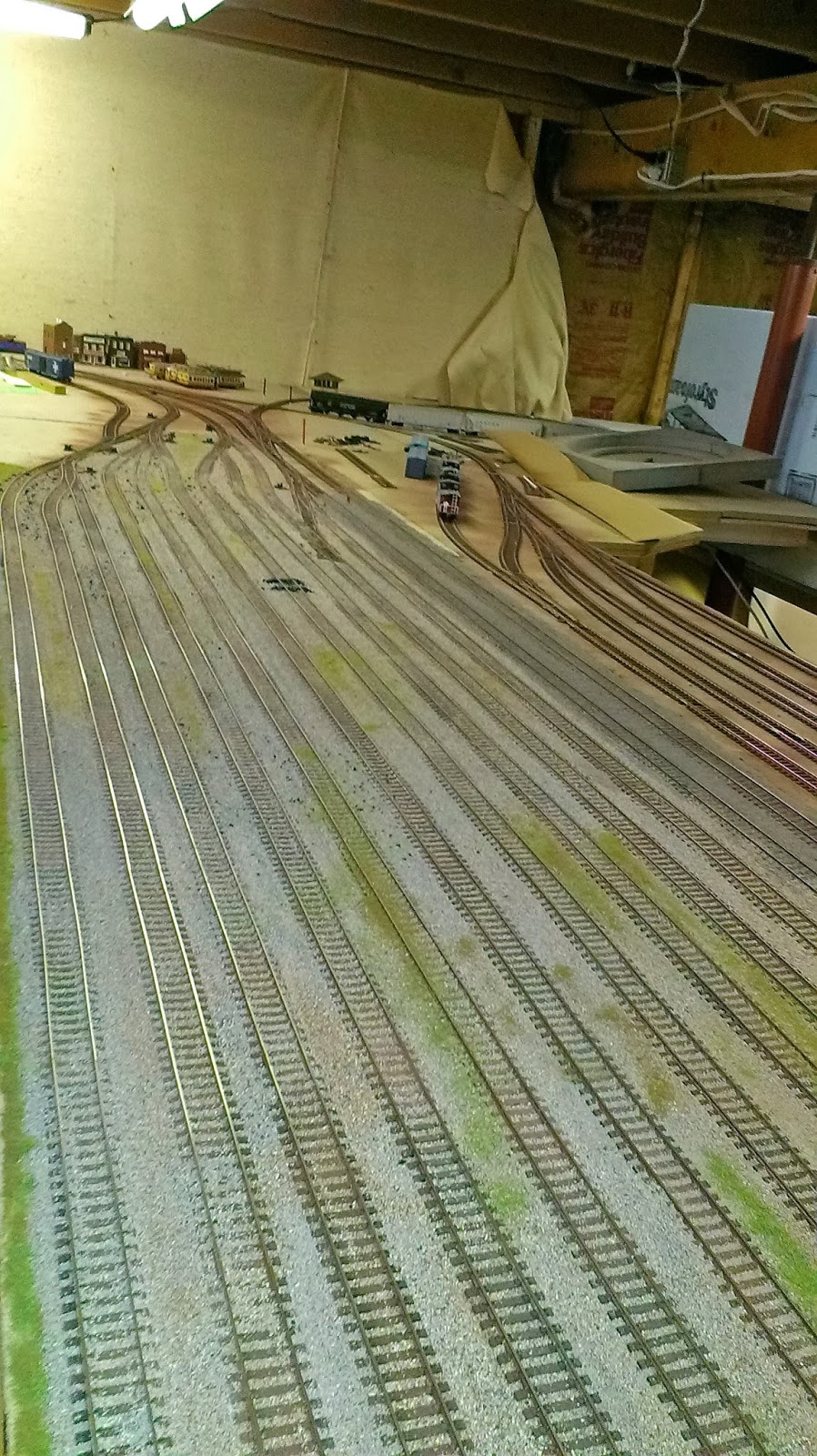 Last month I ballasted the D&H yard tracks, replaced a couple switches on the SAR and also ballasted the southern end of the SAR main line from LM to just north of Mechanicville station. 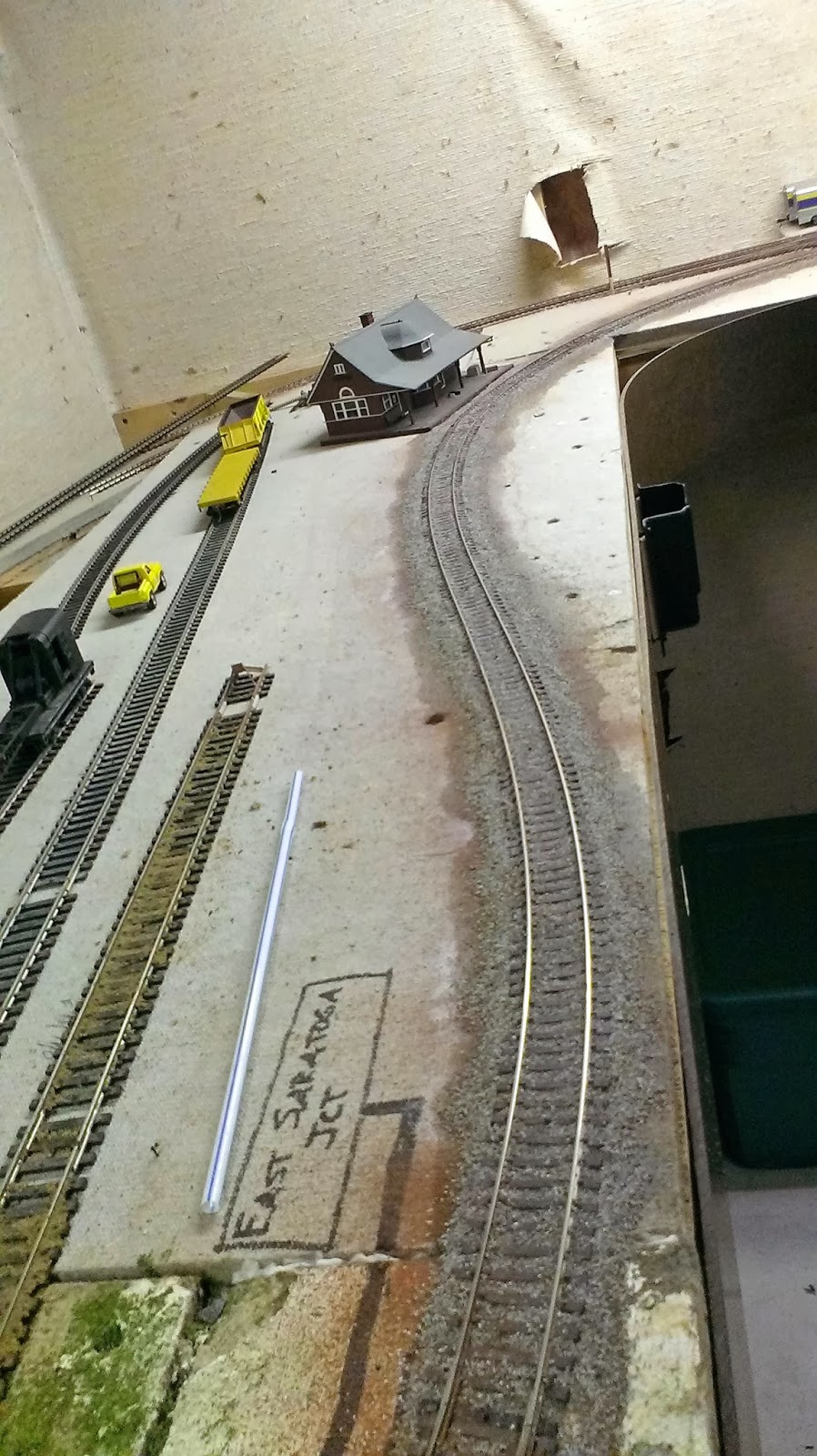 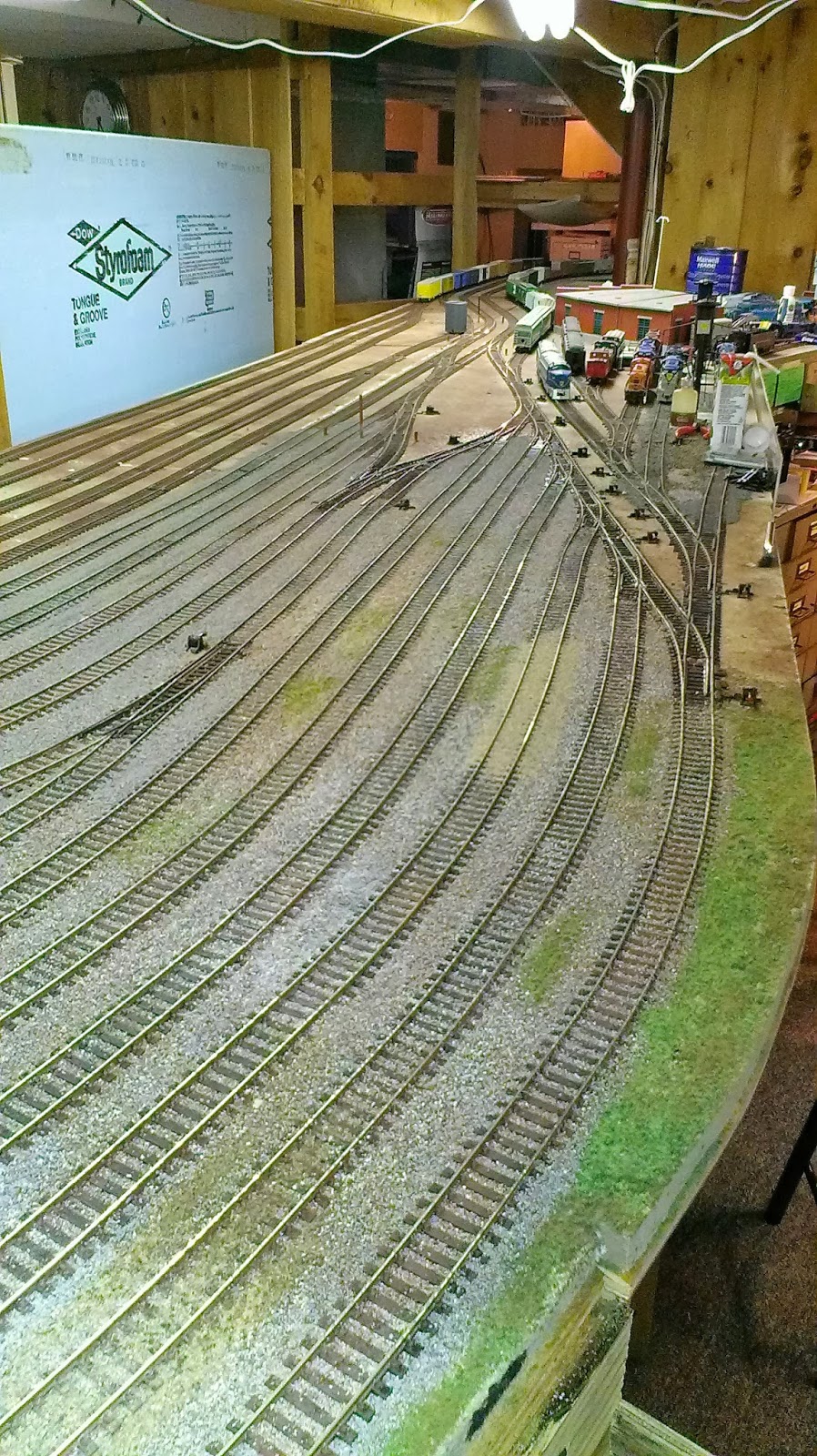 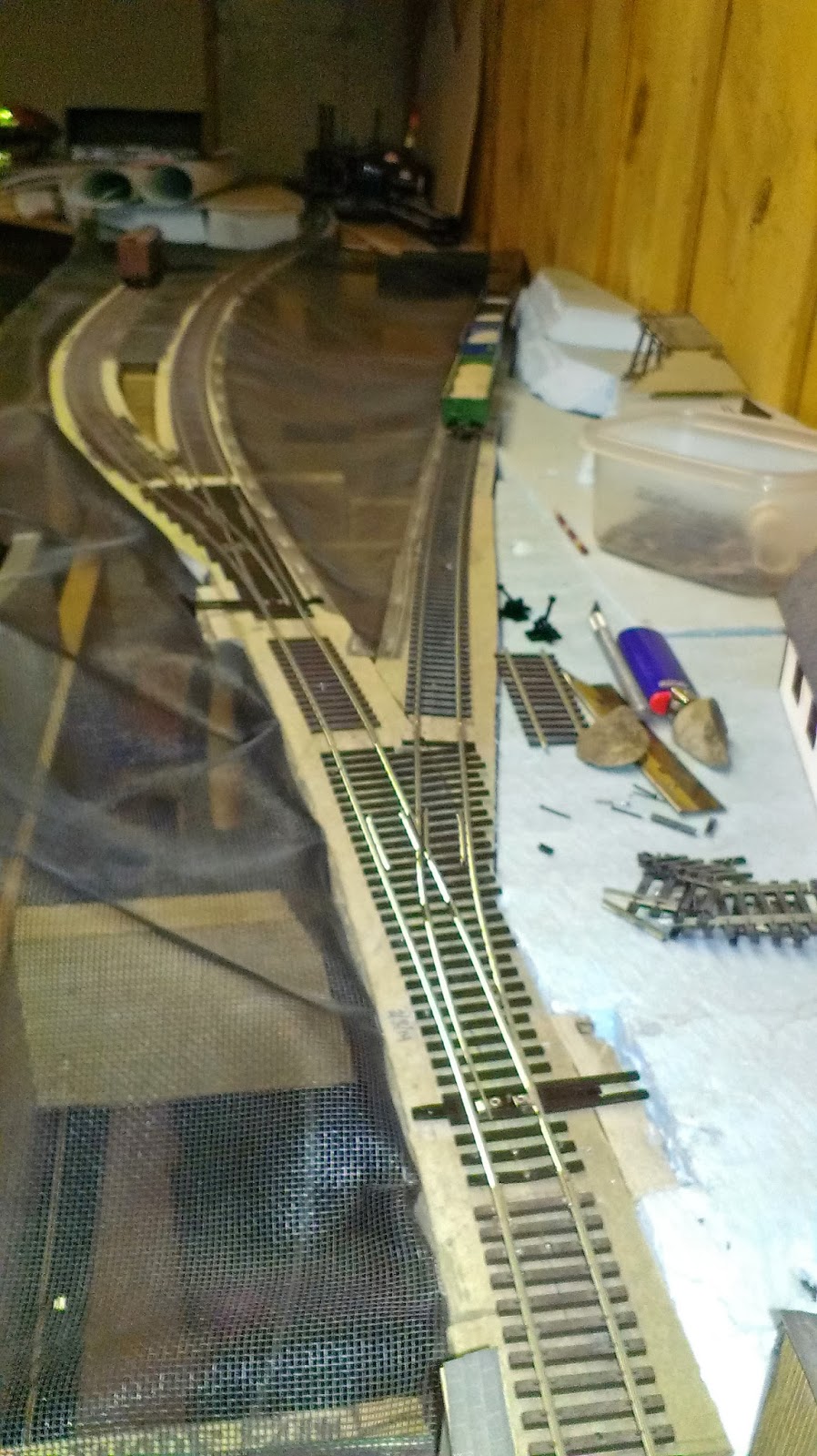 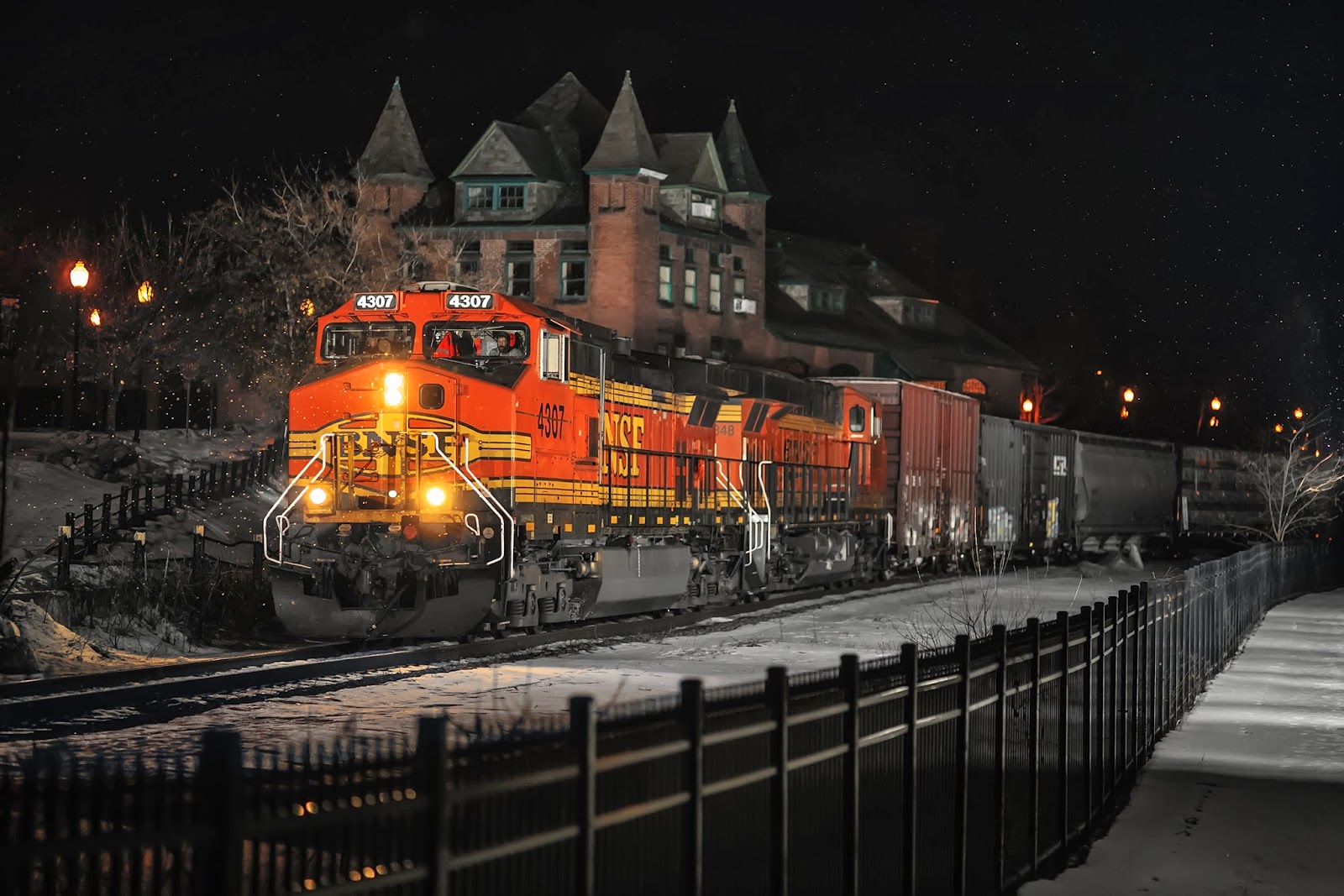 Tonight marked the return of the BNSF pair on train 930 and I knew of course, where I wanted to shoot them.............passing the photogenic ex-D&H station in Plattsburgh, NY! Tonight I arrive on location with lots of time to spare, and end up waiting within the warm car, confident I will hear CN 528 calling for permission on the Rouses Point delivery track. This will allow me plenty of time to set-up the lighting as running time down to Plattsburgh is forty five min. after U.S. Customs scans the train. Amid much anticipation, 528s conductor calls for permission finally around 02:30 and I happily get to work setting up the lighting. The slip-on “ice grabbers” I mentioned previously which fit like “galoshes” over my winter boots are the only reason I can move around in here, as the snow is actually a hardened sheet of thick ice with powder underneath! Nothing I want to stroll around on without the help of “ice grabbers”. Once the lights are working, it’s back into the warm car for me as I listen for the departing 930 passing one of two detectors north of my location here. Around 03:45 930 is heard passing the first detector, then the second one north of Plattsburgh signals me I have seven minutes before I can expect them to be in front of the camera! With the stepladder all positioned this is plenty of time to get set, the opposite of the previous night where I had seconds of time to get the image before me! The detector reports a temp of ten above, kinda warm! lol! Silently, magically, it starts snowing! Even better, large flakes that will show up in the photo! Catching snow against the black sky adds a lot of my winter photos! Regardless of conditions, I’m a happy night train photographer listening to 930 whistling over grade crossings coming toward me through the city! Finally headlights are in sight, and engineer Robert Dennis with conductor Chris Walsh come around the curve and past the station! BNSF power at Plattsburgh! What a combination! The flash units light the pair of colorful visitors up for a moment, then they are advancing towards me to pass on my left as I give the cab a wave. Nice run-by guys! Thanks for being here with 930! Only 92 axles at the scanner! So I was grateful CN found some cars to operate the train with! lol! Minutes after the passing of 930, I'm standing around admiring the location when I realize.........the large flakes of snow......they've stopped. I don’t know, someone was looking out for me tonight providing this snow! Shot on February 4, 2014 at 04:27! Please enjoy! Comments are welcomed. 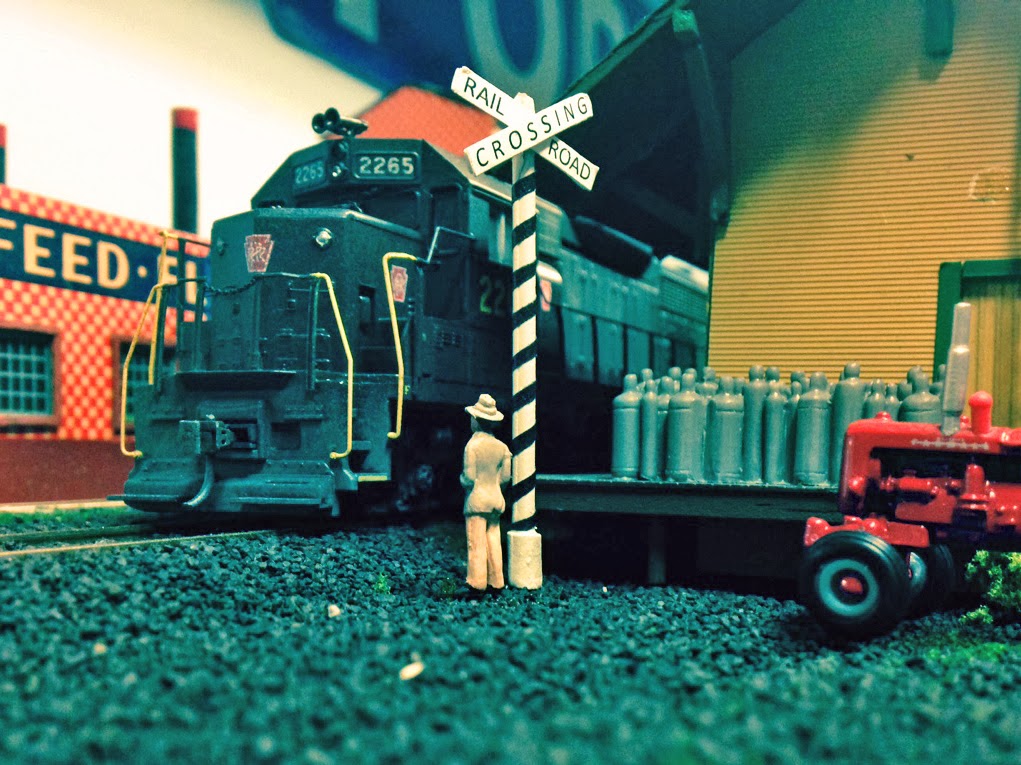 My layout is loosely based on the New Haven's Maybrook Line. I model from the 60's to the early 70's from Maybrook yard to roughly the NY/CT state line. The towns emphasized are Clintondale, Highland and Poughkeepsie. Including all the industries served including, Smith Street yard, LaGrange, Hopewell Jct with a small connection to a interchange yard at Beacon. There's about 20 online industries and I have a few local passenger trains too. The layout is about 85 percent done.i modeled this line as I grew up in Poughkeepsie and was always fascinated with this line even though I was. A bit young to see it! 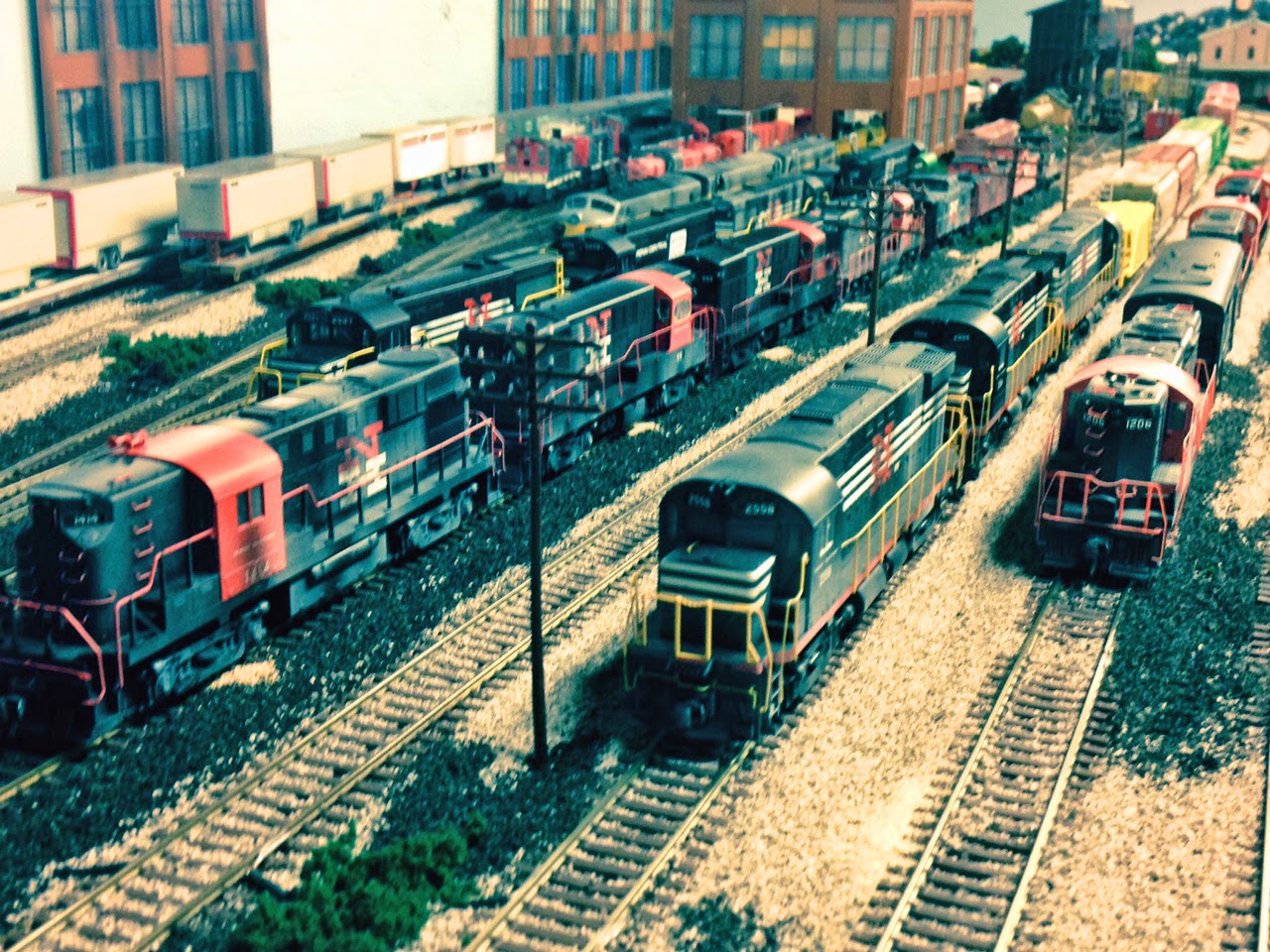 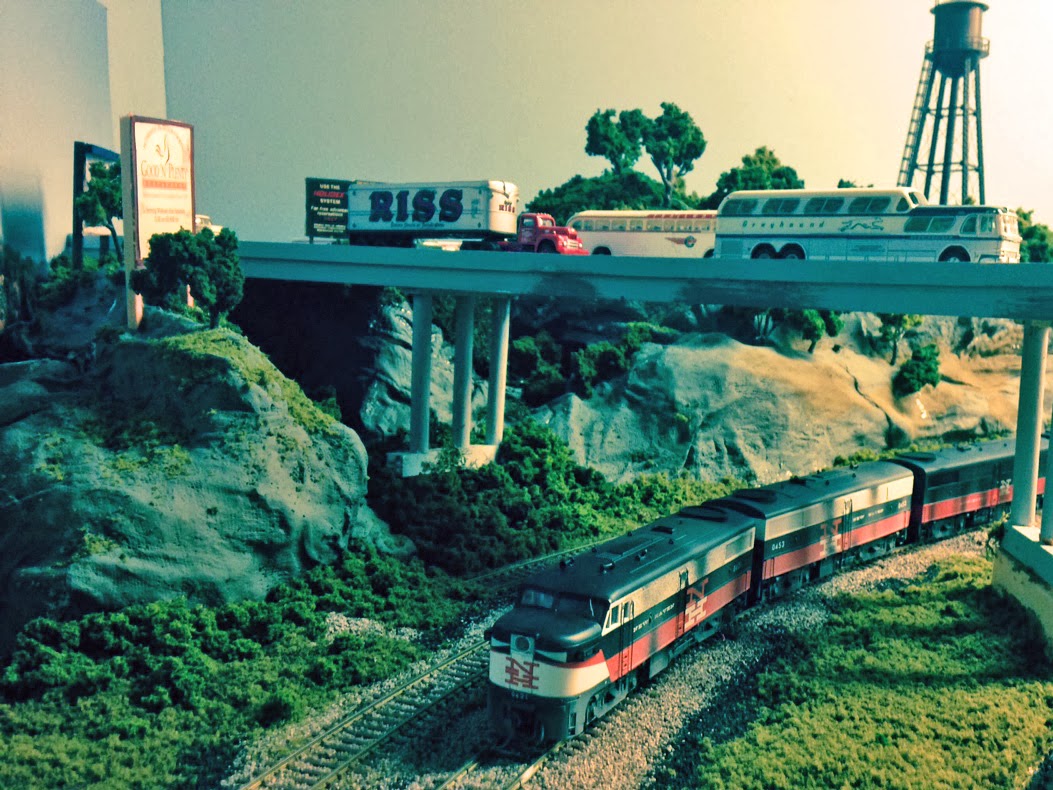 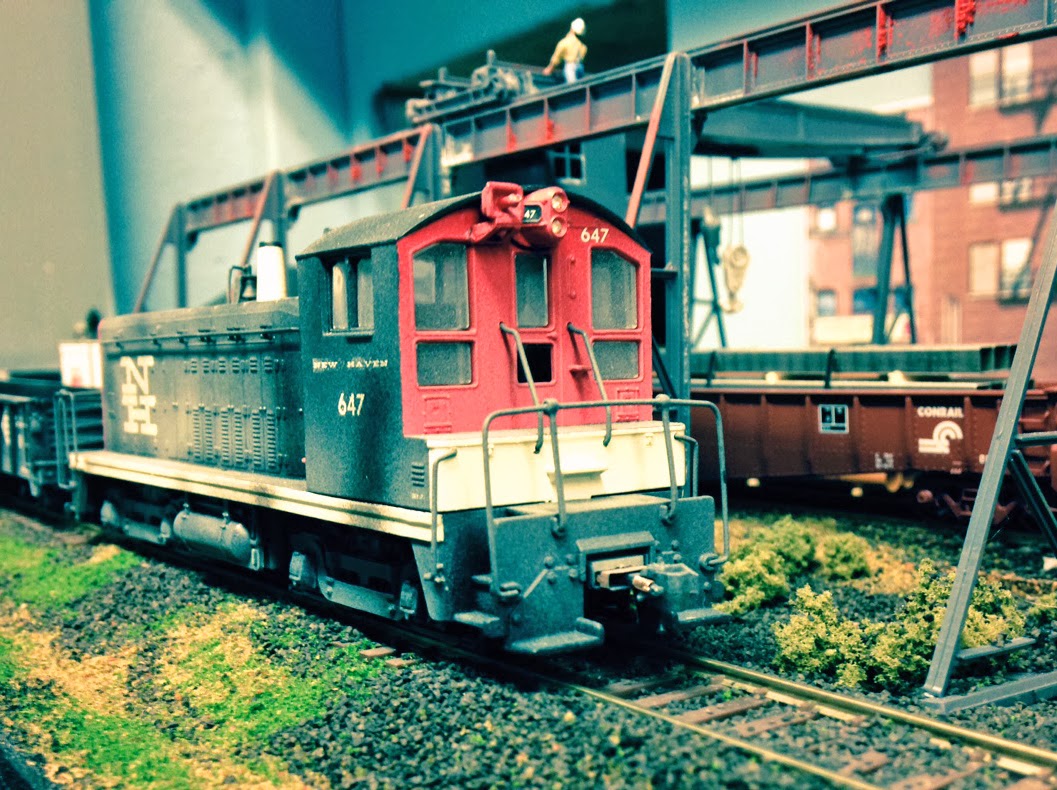 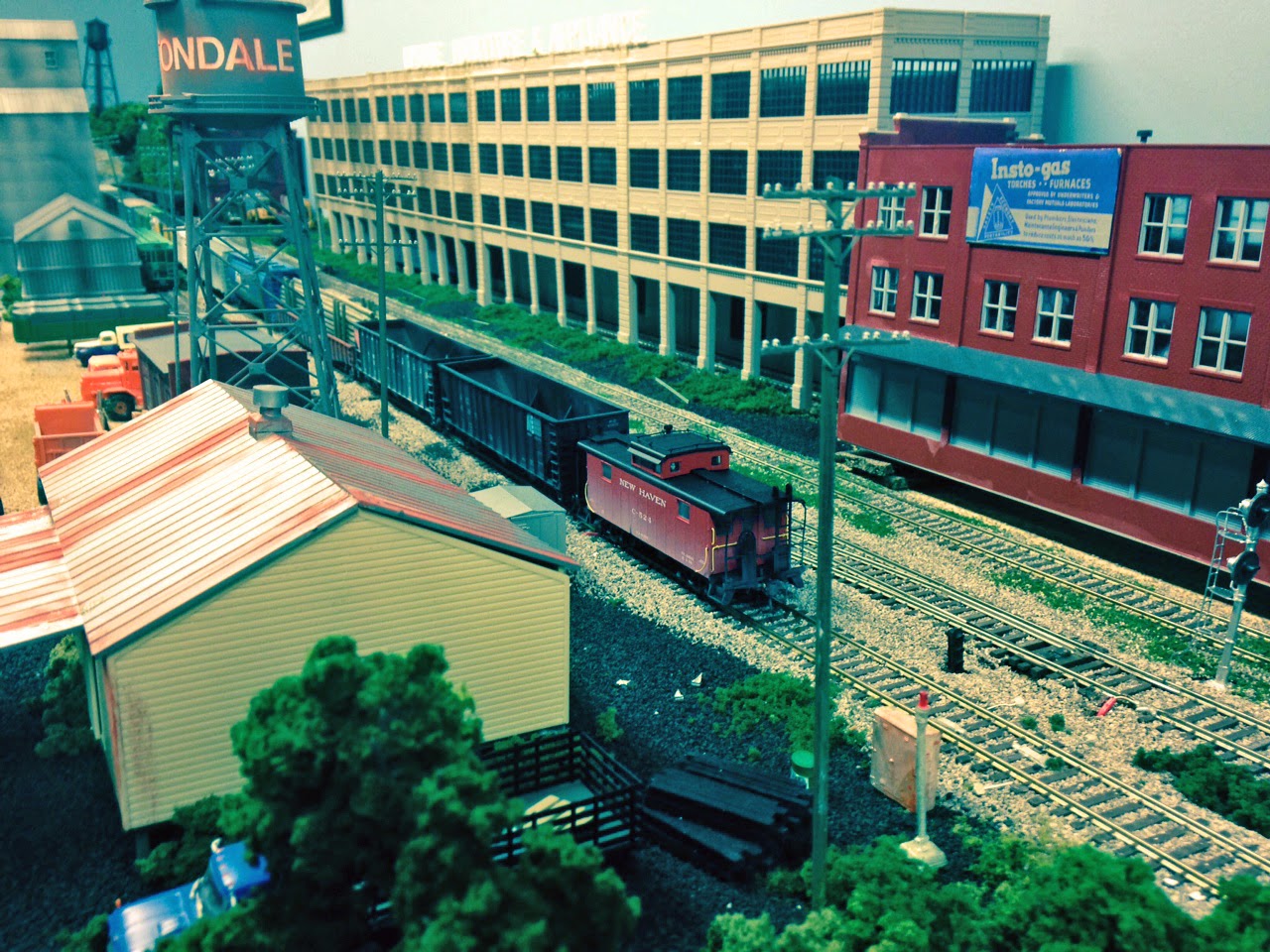 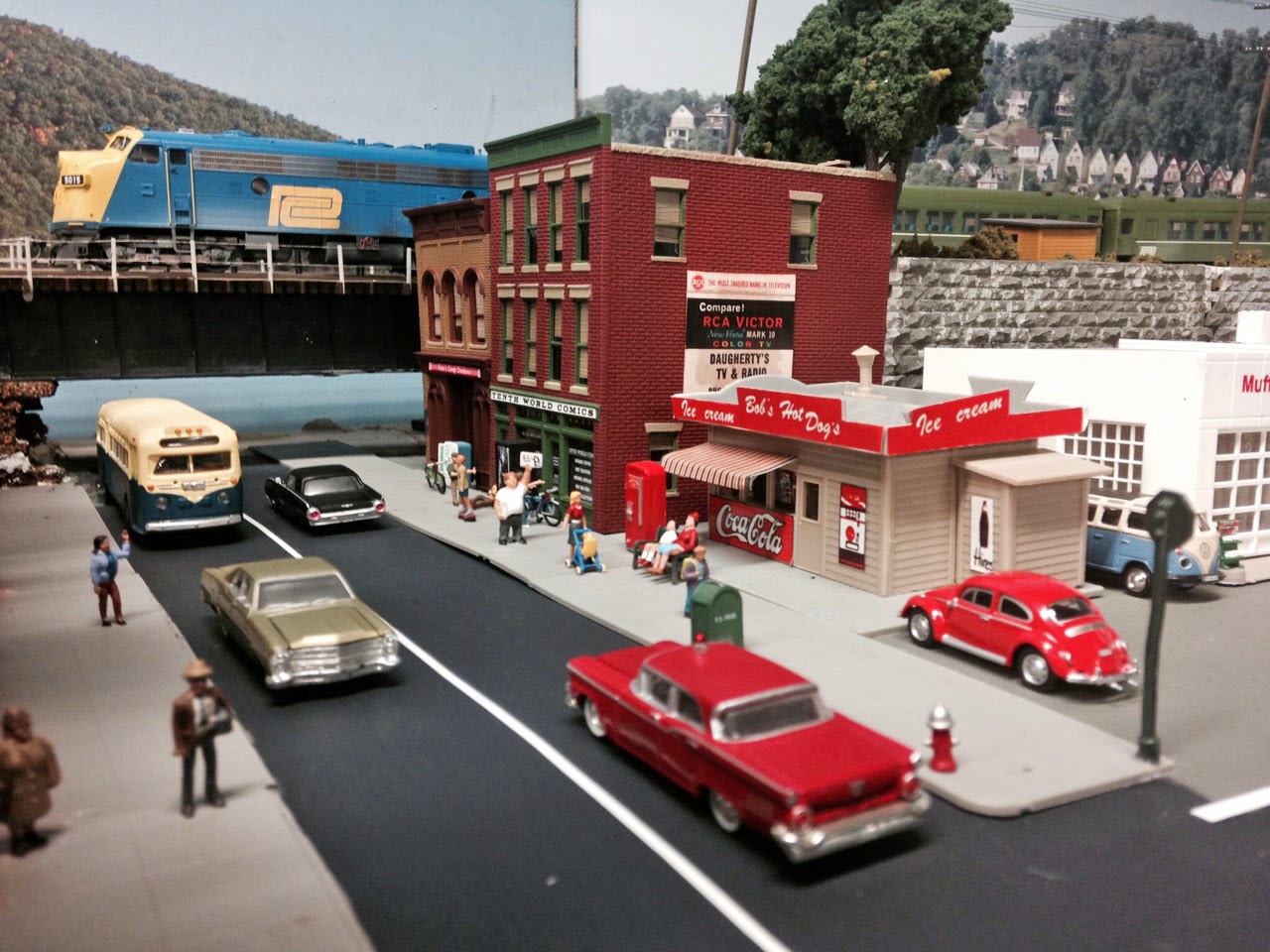 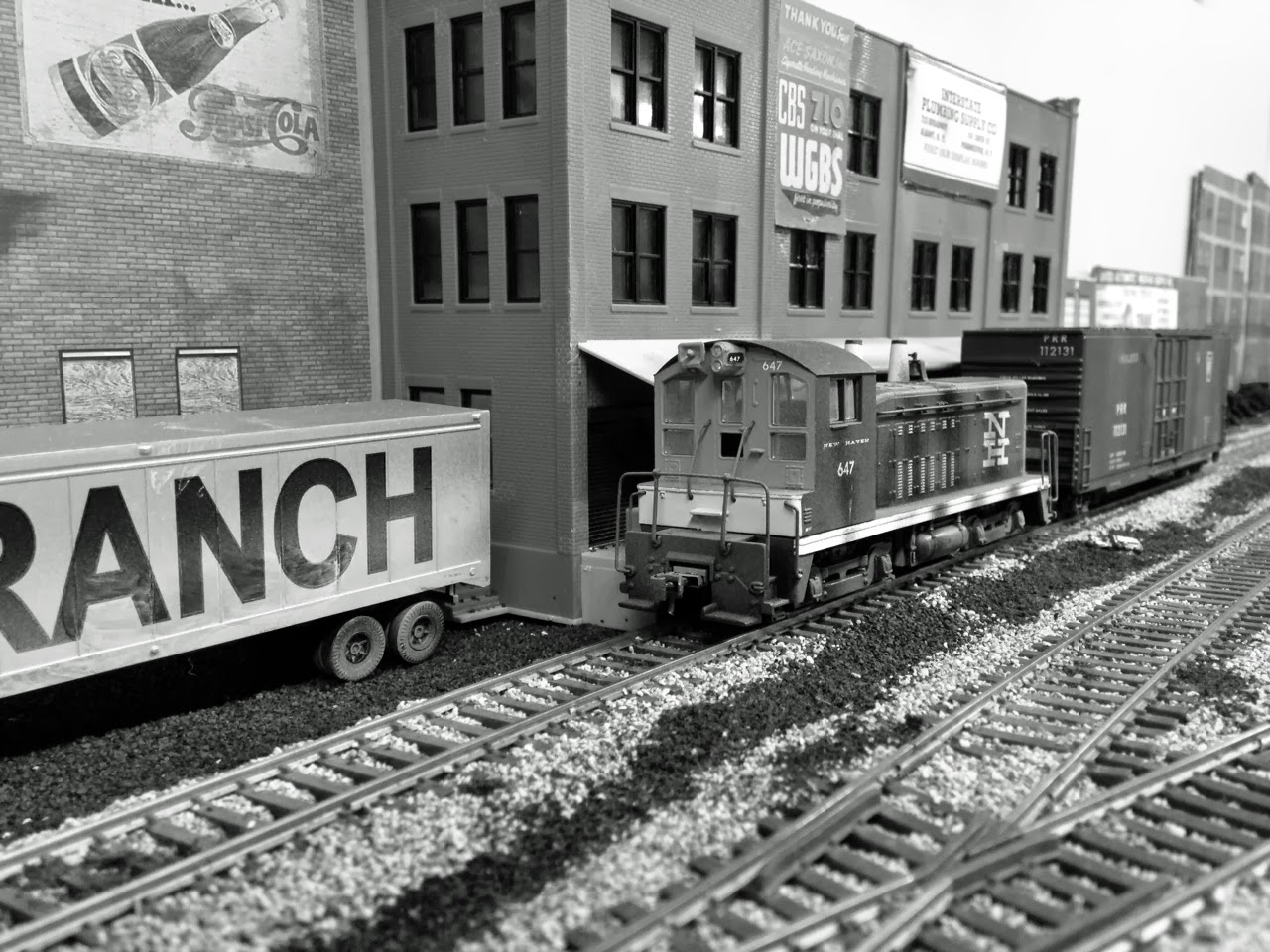 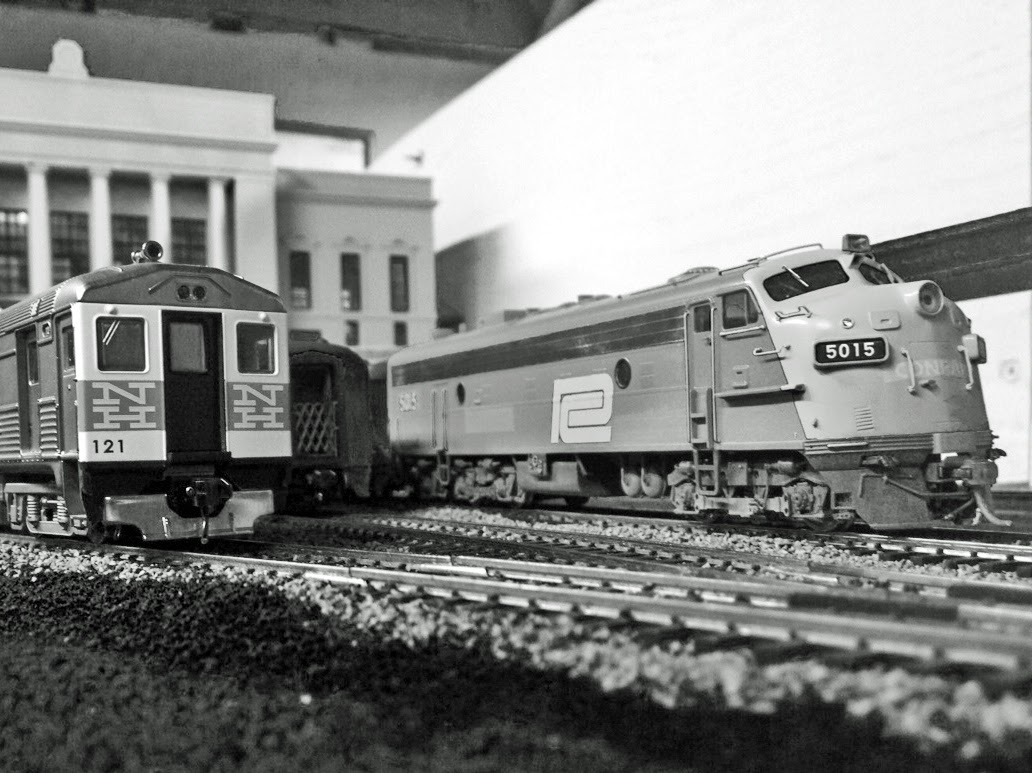