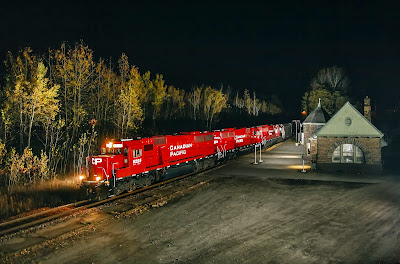 This is one of those rare (for me) later that same night photos. Returning to Hinesburg from north of the border in Foster, Quebec basking in being content with my two images of the Oxford Express, the car scanner comes to life as a detector on CP over across Lake Champlain from my position on the Interstate signaled the passing of a freight, and in the garbled crew acknowledgment of the detectors broadcast message I was sure I heard............6.....4.....2. That 642 was advertised earlier to be running into Montreal from out west with a trio of SD 40-2s! I check the clock on the dash..........01:00ish, and continue heading for home. There I found messages from several friends attesting to the fact that 642 had a rebuilt ex-SOO LINE SD 60 leading tonight! Knowing 642 to be roughly across the lake from my position at the time, I brewed some tea to refill the thermos and headed out for a favorite spot on Rogers Island in Fort Edward. And never heard another thing on the North End for over an hour until I was getting near Whitehall, where unbeknownst to me a great gift was waiting. The scanner had picked up a crew talking about restarting a trailing engine, and I assumed this to be 642s crew dealing with an elderly SD 40-2. I am driving past Whitehall Yard when a crewmember on 253 rings up the dispatcher, identifying his leader as 6225! He relates to the dispatcher how they have set off the two ACs, have one of the trailing units on line and are ready to head north. Now I remember, this trio of SD 60s came down on 252 yesterday in daylight. Two trailing units had shut down and they needed to add the pair of ACs to get over Richmondville Hill. Last I had read on the railfan grapevine showed the ACs leading back north leading 253 out of Binghamton..........but here they were, setting them off in Whitehall! An inquiry of the night dispatcher by 253s crew about what is coming toward them further north reveals a 930 and 252, no mention was made of that 642! Time to turn the Civic around! lol! I leave from opposite Whitehall Yard just as 253 is getting underway, and I can picture how great those three repainted SD 60s will look from atop the display engine at Port Henry, some forty or more miles away. If, I can get there far enough ahead of these guys to set up. I had done this in the past in this situation, years ago, but the track speed has been improved a great deal in the ensuing years, so this would be interesting. First of all, no night photo is worth risking a speeding ticket over. So I keep to five mph over the limit driving north, and obviously, I was successful! I know where everything as far as the lighting goes here at Port Henry by now, and I test the lights before I climb up top of the RS-18 cab on display here. Being encouraged to “get it right” by the approaching SD 60s, which could be clearly heard coming up Lake Champlain to my south. Normally on quiet nights like tonight, I can hear northbounds south of town blowing for a couple grade crossings, allowing me to make a judgment on how far away they are, I am not granted that luxury tonight however, and I have finished manually focusing the 28mm lens and leveling the 5D when I am alarmed to hear the low roar engines produce crossing a short deck bridge maybe a half mile away......in town. I have time for a couple more test shots then 253 is blowing for the crossing just out of sight, and up around the curve the station is situated in the middle of comes quite a sight! Three newly repainted and rebuilt SD 60s! Out of storage where the entire class of engines had been until recently. Responding to the open camera shutter, the flash units do their thing, leaving me to give the crew a wave as they pass by below. Success! What a night! Watching my step, it’s a long way down from up here, I preserve the image from being accidentally erased and slowly collapse the tripod before climbing down via the short hood with its handrails. It’s not every night trackside I shoot three “keepers”! lol! Shot on October 26, 2013 at 04:04 in Port Henry, NY. Please enjoy! Comments are welcomed. 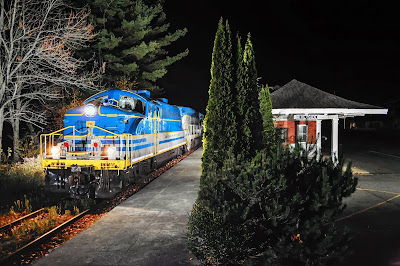 We return to Riverside Station alongside the Hudson River tonight on the Saratoga & North Creek for another night photo of BL2 #52. I’ll enjoy all the moments universe wants to send my way like this one! In addition to the ever attractive BL2, my friend Greg Klinger has agreed beforehand to pose for me with the BL2 passing by! Mother Nature provides a steady light rain with temps in the low fifties. What could possibly go wrong? Ha,ha,ha! I arrive at the pre-arranged 8 pm, (no small feat in itself) and meet up with Greg, and we go about placing the lights for the scheduled 9:05 pm appearance of train 185. Tonight, keeping in mind how elevation is everything with train photos, no matter day or night, I have planned to go for a higher viewpoint, up atop the caboose. With Gregs help I have camera, tripod and large umbrella in place some twenty minutes before train time. Life is great! Test shots look fine, I ask Greg to move a flash unit for me, otherwise we are ready. We let nine pm arrive before either of us mentions to the other that “hey, we have not heard that ‘boat horn’ yet, remember last Sat. night we heard it some fifteen minutes before we saw headlight glow?” 9:05 passes, the time we saw 185 a week ago, with no sign of a train. No problem we confidently conclude, they are a little late tonight that’s all, maybe the fallen leaves are giving the BL2 problems. 9:30 then 9:45 pass with no boat horn sounds, now we are concerned as this is a scheduled passenger train. All sorts of doubts are manufactured in our heads as to what happened? Ten pm and we hear that most welcome low toned sound! lol! Minutes pass by as we listen to engine exhuast, followed by quiet breaks, then more engine exhaust sounds then finally headlight glow can be detected, then the headlights of 52 come into view below the station, yes! Success is at hand! I direct Greg into position below me............then we both notice..........the train has ah..........stopped! Maybe two thousand feet away, there #185 sits, then the ditch lights go off, never a good sign. We agree that dose’nt imply good things. It becomes a stare down, lol! Nobody moving. Neither Greg or I have our scanners handy to monitor any conversations between crew and dispatcher, so we wait. After several long minutes, happily the ditch lights come back on! Forward! I’m thinking. And the BL2 led 185 struggles up to the station and stops, this time only some fifty feet away from my planned position for the photo! Oh, so close! But no cigar. However, now the conductor appears, walking up the platform past Greg, says a few words with him and continues past the caboose greeting me on the roof underneath the brightly colored golfing umbrella from La Grange, to the grade crossing behind me where he manually shuts off the crossing signals and waves waiting traffic by. Greg hollers up to me.............”wet leaves! They are having problems with wheel slip!” Once the road traffic is cleared the conductor resets the crossing signals and walks back down to us to ask Greg...............”the question”. “WHERE DO YOU WANT IT?” Greg looks up at me, and I holler instructions to the conductor who relays them to the engineer. I reflect how Greg and I just went from “Rags to Riches”, ha,ha,ha! As the crew positions the BL2 for us. I fire off a couple shots, then ask for the ditch lights to be turned back on please, (as I plan for them to be on when setting up the lighting) then fire off several more shots. The engineer emerges from the front door of 52 and I climb down to greet an old friend from long ago, Tom Carver! Amid handshakes, pleasantries and of course the obligatory “chimping”, (oohing and ahhhing at the images on the camera lcd monitor) we are told the train is empty of passengers, and they are out of sand for traction on the wet rail and fallen leaves. They have their doubts about climbing the grade out of Riverside and mention how they will back down below the station to get as much of a run at it as they can . And with that disclosure the crew says goodbye and heads back to their duties on board, leaving Greg and I basking in being spoiled! In my case at least........AGAIN! As the BL2 led passenger train backs away from us, I do the only logical thing to do in this case, and climb back up atop the caboose, as you would I’m sure! This time for a photo runby! A totally different experience versus shooting the train stopped! Once they roll past us and out of sight into the darkness, I climb down and collect the equipment with Gregs help. Before long though..............here they come. Back out of the night into view and over the grade crossing comes train 185, unable to climb the grade out of town! The crew ends up tying the train down overnight out of sight, and a crew van picks them up for the ride back to North Creek, while Greg and I bask in our accomplishments. Having Greg in the photo waving makes a huge improvement in my opinion. And hey? Where else in this world of ours, can one see a BL2 built in 1949 working with a B39-8 built in the mid-eighties in 2013? Only here, on the Saratoga & North Creek! Every night is an adventure! Shot on October 19, 2013 at 22:24 in Riverside, NY. Special thanks to Greg Klinger and the S&NC crew on train 185! Please enjoy! Comments are welcomed.

NS OCS On The D&H 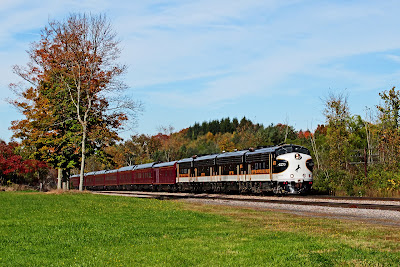 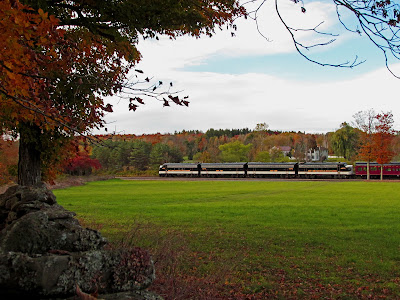 Here are some pics from the October 3rd trip of the NS OCS up CP's A&S. I initially didn't plan of doing anything with the train but with up to the minute texts from "Brian" (Thanks You Again!!!) as I was pulling out of the driveway and really nice weather I said "Ah What The Heck". After a quick stop at Stewarts at 20 and 30 for coffee I followed the ROW from 503 to Gage Road. When I arrived there were a few fellow fans already there who were very well behaved. After about an hours wait the NS OCS came north on its way to Mechanicville. I then left and headed to Colonie. Once I again I was texted around 1:30 that that OCS's power was running around its train so i decided to again head back to Gage Road and do a from the field shot. Around 5:30 the OCS showed up again deadheading south for home. I didn't bother following the train as weather pretty much went to potts again after the train passed. Nice to see some class again on a railroad with not much class left.

Dean J. Splittgerber, Duanesburg, NY
Posted by Rob D at 6:21 AM No comments: