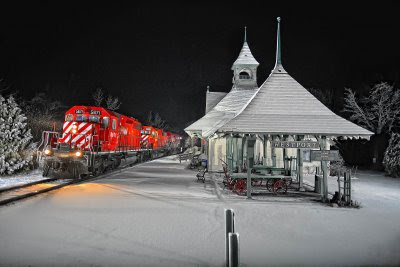 The first bonafide snowstorm of the season arrived around midnight last night. To me, trains look their best at night in snow, preferably falling as well. It's the secret ingredient that makes night photos of trains in winter so appealling to me. So when I discovered a snow storm arriving from the Great Lakes late last night, I scrambled out into the car and headed for Westport. Guaranteed to be "a mess" with temps in the low thirties, wet snow would act like rain on the locomotives, bringing out the deep colors! My concern was first, would I see a train, and second keeping the flash units dry enough once set-up. Driving into Port Henry, I most fortunately overheard dispatcher Kelly Knight telling 415 at Whitehall of a 253 coming towards them! Whoa! 251 & 253 have been powered by SD 40-2's on occassion lately, and running time up to Westport would be around two hrs. I figured. Should I wait to hear from 252 or set up for 253 and hope.....for an SD 40-2 leading? Pulling into the lot here at Westport around 01:30 brought my answer. WOW! At worst, I thought, this would be good shooting practice for the Holiday Train I planned to encounter on Wed. An hour and a half later the flash units are in position, protected from the wet snow by zip lock freezer bags, I get everything powered up and take a few test shots. The approach signal for "Howards" just out of sight down into the curve here, lights up green over yellow, indicating to me, and the approaching 252, of a meet with 253. By now the weather is a mess with the temps. on the edge of freezing, sleet starting to replace the snow, BUT the surroundings look gorgeous! "They might", I'm thinking to myself. They might run an SD 40-2 tonight! After 252 sweeps past with an uncharacteristicly short train, I contribute a "light show" for the early risers in the neighborhood when one of the flash units gives in to the sleet and starts firing continuously, causing the Pocket Wizard remote attached to it to send out "fire" signals in turn to the rest of the system, which obediently follows suit! Jeesome Crow! So I change out that flash with the only unit not used, still dry, do a quick check around and don't see anyone at their window, don't hear anyone cussin' and happily walk back to the stepladder and the black umbrella propped against it, protecting the camera and lens. The sound came after 04:30, the familiar sound of SD 40-2's pulling upgrade into "Howards" from the lakefront trackage north of Port Henry. We're in business! Up on the stepladder, you hear the small tree branches snapping nearby under the wet snow as you see 253's headlights at the horizon while they pass the talking detector just north of "Howards", and within a minute or so, CP 5671 comes out from behind the station here into a sea of white under a black sky completing a Christmas Card scene. Three hours and a half after arriving, success! Shot with the 5D and Zeiss ZF 28/2 (Nikon) set at f2, on Nov. 25, 2008 at 04:56. Flash units on the platform and the walkway up back were erased in photoshop as were Gary's footprints. Please enjoy! Comments are welcomed.

I bought a Bachmann-Spectrum 2-8-0 with sound and have been having fun with it. It doesn't fit well into the Skene Valley Railroad so I decided to run a Rutland Milk Train, just for the fun of it. 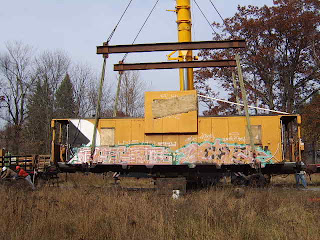 The CP 422986 was purchased by Operation Lifesaver from the storage yard behind the engine shop in St Luc back in the spring. It was transported to Saratoga for delivery to the Ballston Industrial Track so the Saratoga County Fair could truck it to their property. It was delivered in July and was expected to be moved in August. The move was delayed until the first week in November and it is now 'home'. If all goes as planned, it will get a nice red paint job and general rehabilation. Fortunately the moving contractors revised their plans...they wanted to cut off the copula for the move but it ended up going over with only the brake rigging etc. removed. Gene Corsale, Community Coordinator for Operation Lifesaver, Ballston Spa School system worked endlessly to make all this happen. 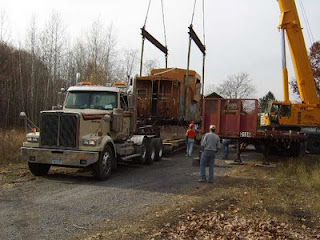 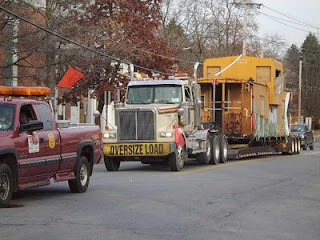 Going through the streets of Ballston Spa. D.A. Collins moved the caboose, started 7am. 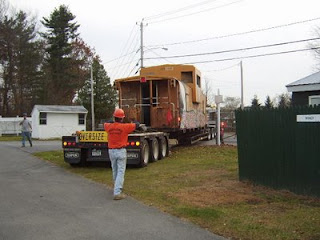 Backing into the fairgrounds, around 4pm. 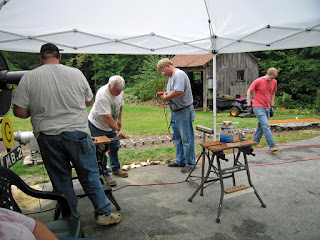 Brad Peterson's Kayaderosseras & Southern Adirondack Railroad. On Sept. 14, 2008 we had a tent set up for shade and a safe work area. Here Rich Veldman has just finished cutting over 200 new ties for the rail that has just arrived. Skip Densing and Bob Hosmer are getting ready to start drilling the rail ends for joint bar installation by Tim Stockwell. 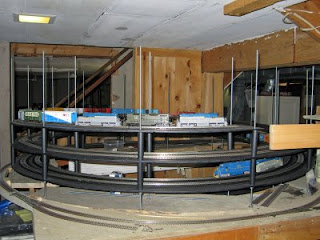 This was my biggest project of the summer, I finally found the hardware for the helix and got it all put up. The upper level (QS cabin and beyond) turned out to be too high, so I still have to get around to lowering things to fit. I also added to the B&M engine shop area in September, though there is really no track installed to speak of. 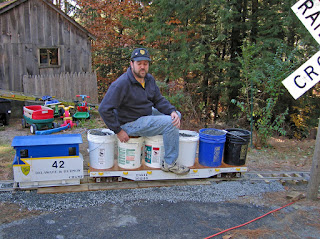 Nov. 2, 2008 Work Extra D&H 42 gets ready to head south with a full load of stone for the new section of track built since September. Not ready for a picture to be taken. 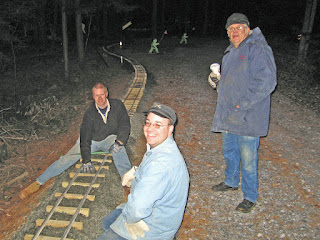 Final touch up to the ballasting done today is being supervised by Bill Bibby with Tim Stockwell and JR Stevens doing the dirty work. This is the trackage adjacent to the driveway near the culvert. 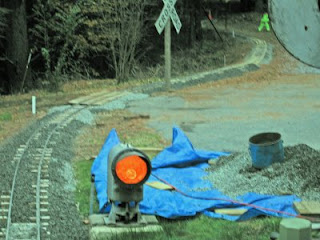 After the workers have gone home and things have settled down this view of the K&SA shows signal 0.2, MP 1, the crossing cross bucks and the end of track is behind the little green man.
Posted by Rob D at 12:52 PM No comments: 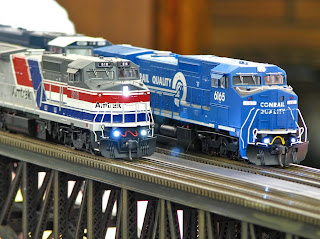 We had a great turnout at Frank Adamec's house on Thursday October 30th. Frank surprised with scenery finally getting underway in the new section of the layout. He also tore out the old shops, and reorganized the paper mill area. He will eventually add large diesel shop in the middle of the layout. Mark Oliviere took a few great shots on one of Frank's scratch built bridges. 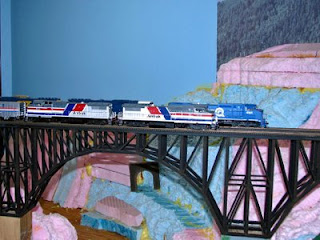 Mark got another shot. With all the pink and blue styraform in need of plaster. 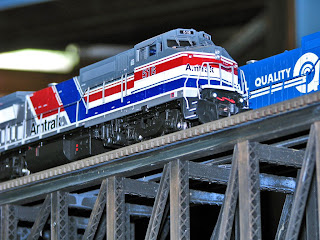 More of a dramatic shot by Mark. 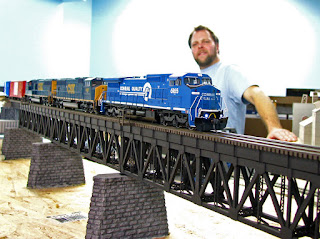 I got a shot of Frank and a long freight going over a rough copy of the Hudson River bridge in Mechanicville that Frank also scratch built. 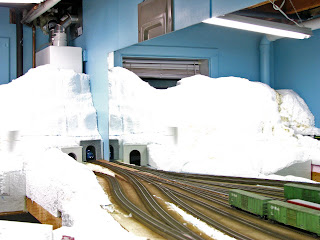 They look like snow capped mountains but really just need some paint. Such a small space, Frank decided to add a mirror to double the room size, pretty neat effect.