Sherman? Sherman is that you? 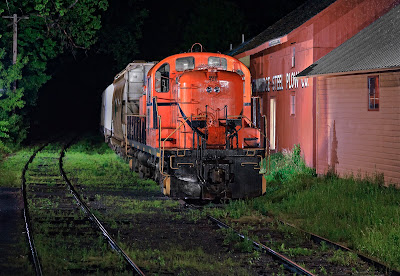 Entering Cambridge, NY two mornings back after the two hour plus drive down from the compound, it appeared to be just another grand upstate New York village. No one was out at two a.m., (what a surprise, eh?) even the town police cruiser was parked outside the darkened office, giving an indication of how much was going on 'round town. To any travelers passing through, Cambridge was just another place to go through to get somewhere more important. On this night though, appearances deceive. Tonight, Cambridge is included in a tiny, elite group of towns in North America which include an operable ALCO RS-3 among the towns attributes. Turning right off from Rte. 22 in the center of Cambridge, down the street the tracks of the Battenkill Railroad appear. I am looking for Sherman, Sherman De Ragon to be precise. Perhaps better known as Battenkill 4116, which is named for Sherman De Ragon. Turning right again to drive down past the photogenic ex-D&H station, even though I am looking for Sherman, I don't see him until I catch a glimpse of the trademark curved high short hood in the darkness beyond the building at the last second driving by! Sherman?.......Sherman? Is that you!? Smiling to myself as I turn the Civic around, I'm reminding myself, you could not make this up Gary! An as built ALCO RS-3, overnighting near the Cambridge Station, surrounded by darkness. "Shall we?", I think as I pop the trunk release, revealing the lighting equipment waiting to perform. Its a beautiful night for night photos, warm for us, with a light rain falling. In setting up the lights and moving them trackside, only one neighbor stirs, to drive off in his pickup. He returns to park in his driveway across the street from where I am unloading the trunk, and I see him out of the corner of my eye start to approach me. As I turn towards him, he starts repeating "I'm a good guy........I'm a good guy...." I nod towards him smiling, introduce myself and we have a short conversation which ends with the man telling me to "knock yourself out" smiling in response to learning what I am up to at that hour, in the rain. As he turns to cross the street to his house, I turn towards the station with more lights. Its like stepping into the nineteen fifties! Circumstances combined to create this opportunity, the Battenkill job was already enroute from the enginehouse in Greenwich, NY to interchange with CPRails' D&H and Pan Am in Eagle Bridge when the D&H called to inform that the job coming over from Saratoga was cancelled for that night, due to lack of power or crew. So the decision was made to overnight in Cambridge and start out for Eagle Bridge the following day. This was the first time I had shot an RS-3 at night! What a contrast from the sharp angular lines of modern power. As with many of my night photos, this one is a result of a helpfull tip from a list member. Special thanks to John "Cully" Culligan! Shot on May 19, 2010 at 04:09. Please enjoy! Comments are welcomed. 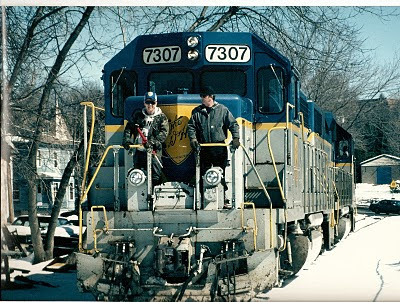 Just so you can remember winter, Jim Layfaette sent this along from the early 90's. Jimmy and this brakeman head up the hill out of Fort Edward. Thanks Jim!
Posted by Rob D at 9:07 AM No comments: 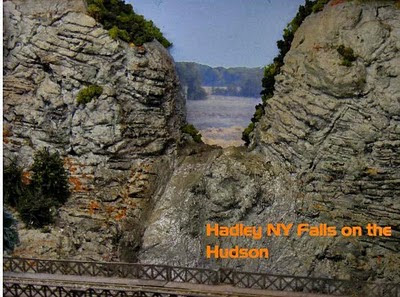 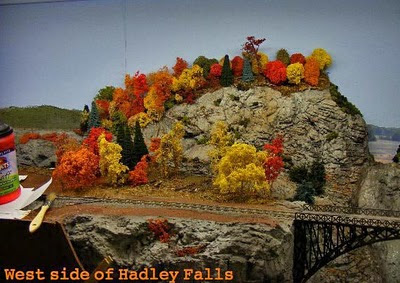 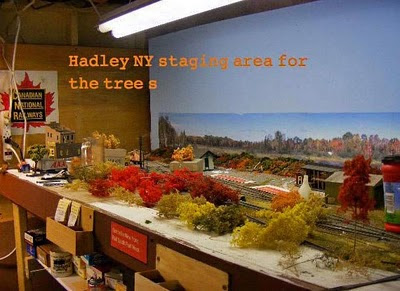 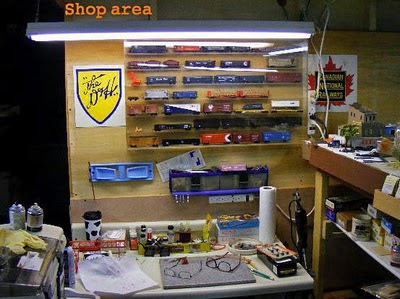 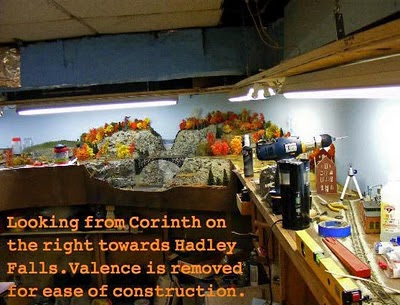 More trees added to the layout, more to come. Made 103 trees using Super trees kits and Grand Central Gems conifers.
Thanks, Lee
Posted by Rob D at 8:59 AM No comments: 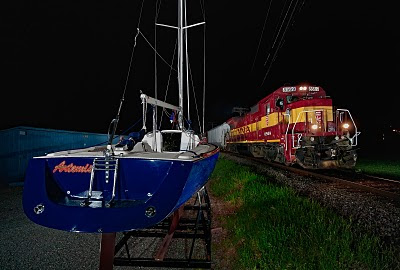 This past Tuesday morning, (early hours) I received an e-mail from photographer Frank Jolin that the 8569 was working the MM&A Newport, Vt. - Farnham, Quebec Turn tonight. It was entering Farnham at 02:30. For out of towners, the 8569 is one of only two locomotives on the MM&A roster wearing the classy maroon and yellow paint scheme! The next night I was up in Newport. LOL! Checking in the yard first, sure enough, I found the 8569 performing switching duties, so I found a spot nearby to capture the unit departing and set up. Three hours later and no train........it suddenly hit me that if these guys are going to Farnham and back tonight "maybe" they should have gone by now! LOL! You don't suppose they are not going tonight eh? I could not imagine the huge Blue Seal Feed Mill in Richford going two days without a switch.....but. Torn between images of Gary driving down to the yard as 8569 left, and Gary being here all night for nothing, I decided to risk the former, and left the location for the yard perhaps three miles away. There I found 8569 shut down for the night. Happy to have checked, I reminded myself that this is another reason why I retired to do this! Ha,ha,ha! I can return the next night. After picking up the equipment, I visited a spot I had seen earlier on the way into town. It was hard to miss, a big sailboat in dry dock alongside the MM&A main line in the Newport Shipyard. From the road it did'nt look too promising because of the embankment the railroad was on, I did'nt think you would be able to see over the rear of the sailboat, even from the stepladder. So there I was, 01:00, walking over to the tracks and boat from the nearby parking lot, flashlight in hand, to check this scene out. Walking across the MM&A main, I look down over the embankment behind the sailboat, and there.......as if left for me, is a neatly stacked nearly level pile of what could pass for bridge ties were they not lacking creosote! Three wide, I stand on them, checking the rear of the sailboat, from the stepladder this will do fine! Now, I have to get back here tonight and pray they depart after dark. 8 o'clock Wednesday night, I'm back in Newport! LOL! And you would have been too, after recognizing this opportunity! After confirming the precense of 8569 in the yard, running this time, with headlights on, I'm down here setting up. A couple out for a walk in the warm air, come upon me setting up around the sailboat, we have a conversation and unconcerned, they go on about their walking. I contemplated asking them to pose in the photo but, for once, where would I have them stand? Ha,ha,ha! It's after ten p.m. when I hear the GE departing out of the across town yard, only two miles away as the crow flies, where I have listened to her working for the past hour plus. The lighting has been entertaining to set up, and I'm making some last minute changes. Then 8569 whistles for the Main St. crossing, and its train time here! For out of towners, only one train in each direction uses this track each twenty four day. To be presented with this set-up, and only needing to light it up at night, you can understand my gratitude. Listening to 8569 gurgling her way along the waterfront toward me, reminds me of the heritage of this line, CP Rails' gateway to the U.S. East Coast until CPR purchased the D&H. A haven for four axle ALCO/MLWs in the diesel years, I remember visiting Newport in the seventies for the pleasure of photographing, and enjoying the sights and sounds of the Schnectady built ALCO RS-2s that worked out of the yard! 8569s engineer widens out on the throttle a couple notches as they round the curve behind the sailboat, at the foot of Newport Hill, spots me atop the stepladder, and then passes by at perhaps ten mph. With the flash, the image is captured! I offer a wave up to the engineer passing by above me! Photos such as this are the result of more than my efforts alone at times. Special thanks to Frank Jolin for taking the time as he was heading off to bed to send an e-mail telling me the 8569 was up here! Shot In Newport, Vermont on May 5, 2010 at 20:20. Exposure 9500 on the 5D with the Nikkor 14 - 24/2.8 lens set at 18mm and f2.8! Please enjoy! Comments are welcomed.

Gary Knapp
Posted by Rob D at 9:58 AM No comments: 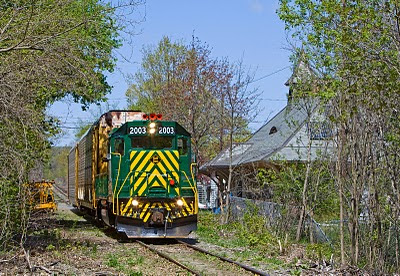 Due to its geographic location the Village of Altamont is a busy little place. People who live in the Hilltowns and who drive each day to Albany, Schenectady or other Towns and Cities in the Capital District depend on the businesses in this little town. The Crossing at Main Street sees both a lot of Vehicular and pedestrian traffic. Also people who live in the village cross over the Albany Main in between neighbor's yards and even use the ROW as an easy access into the heart of the Village. SMS's Crews who pass through here daily have to be very vigilant as can been seen in this Image as A-Team member Jeremy can been seen looking out his window checking for people or obstructions so he can alert his fellow A-Team Member Bill who can be seen looking ahead. Also to be noted is the yellow MOW machine on the left side siting on the siding up by the station. SMS's MOW Division has been busy since late March working on the Albany Main and at the park. Two weeks ago they began replacing ties from the entrance of the park and are slowly working there way up to Delanson replacing ties that are no longer any good.
Dean J. Splittgerber