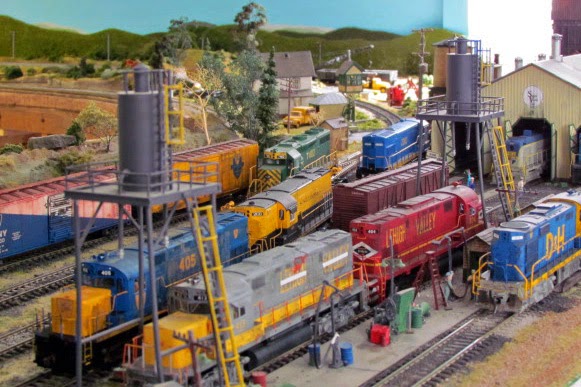 Hostler, Jimmy Whalen, was not a happy camper when he saw all the engines he had to deal with this Monday morning at the SVRR engine shop. 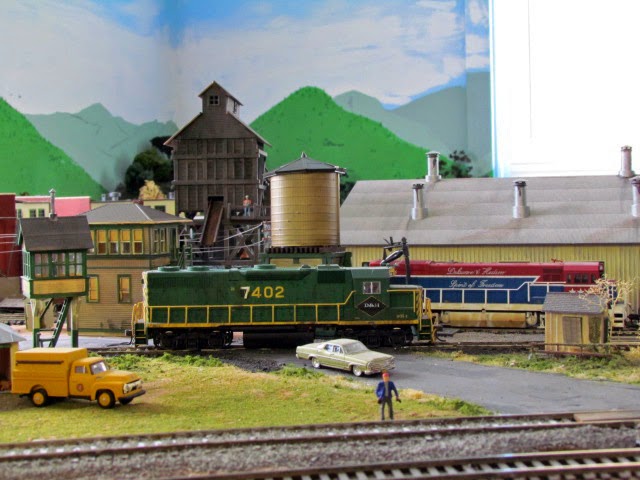 SVX - 3 had a pretty easy day going. They had to bring in an outlawed crew, grab the caboose and head for Lower Junction to get some loaded cement cars from the CK plant. Here they are headed for YN to grab the caboose. They have the 7402. 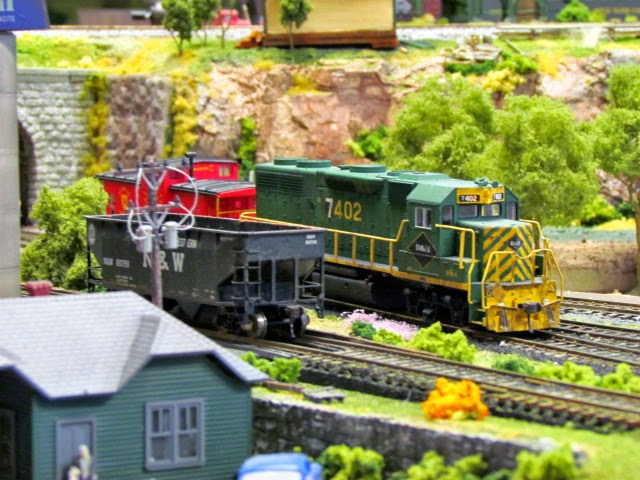 Here they have just come out of the Lower Jct tunnel and will cut the caboose off to run around and grab the cement loads. 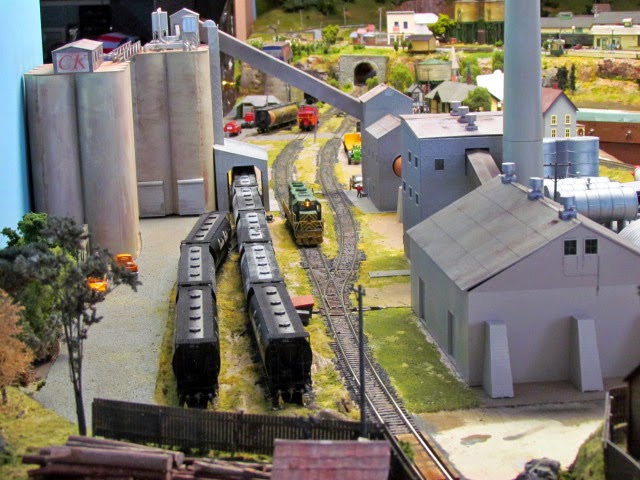 When they made the runaround, they failed to notice that the rear car was right on the wheel stops. When they coupled on they knocked it over, effectively ruining the shot for an early quit. If that wasn't bad enough, they didn't make it back in time for the regular crew, who were all upset that they had taken their nice caboose and left them with a piece of junk.


Been there done that.
Jim LaFayette 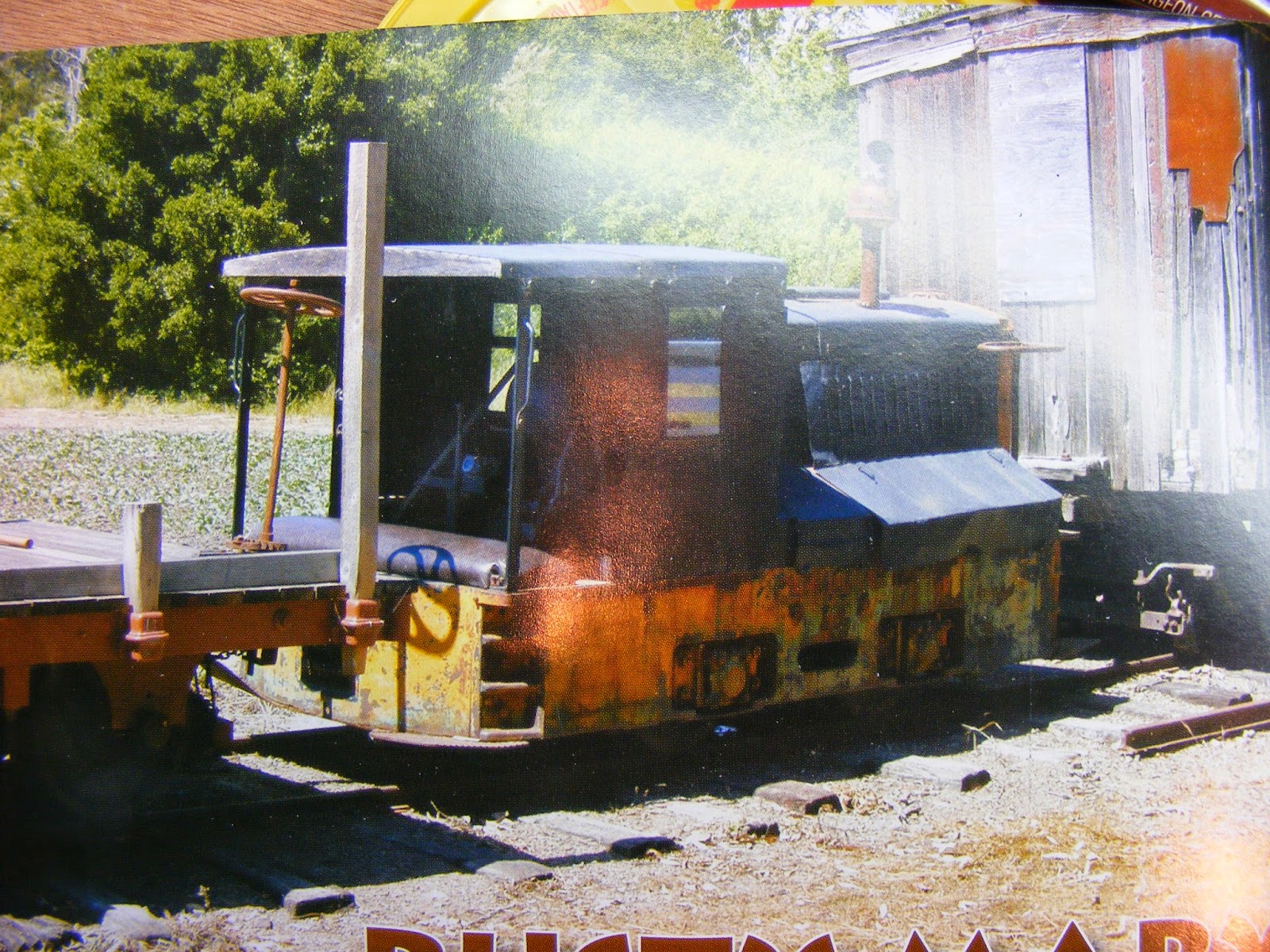 Just an update as to what I've been up to. I got the critter bug and have been making patterns and molds to cast my own kits. 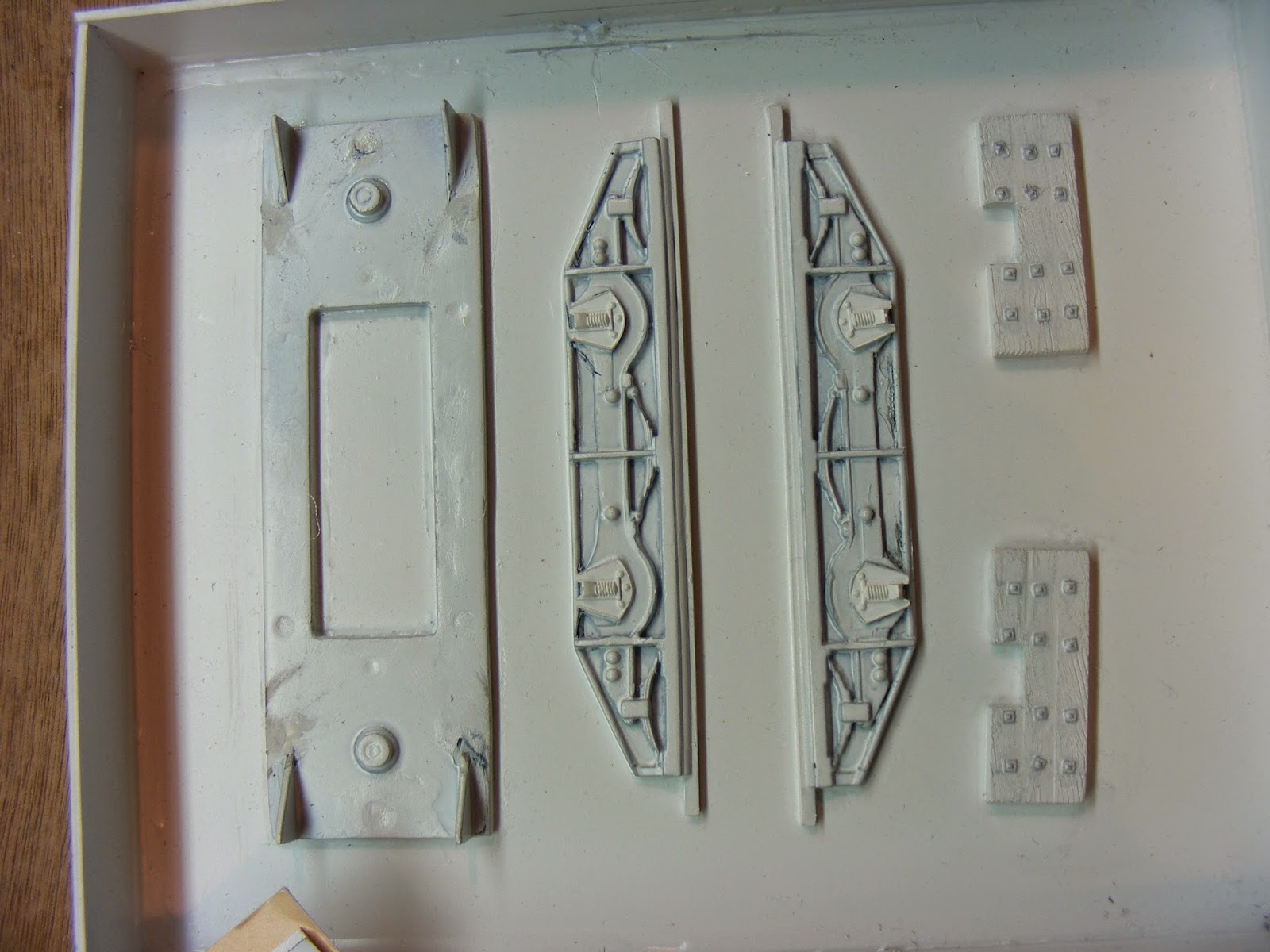 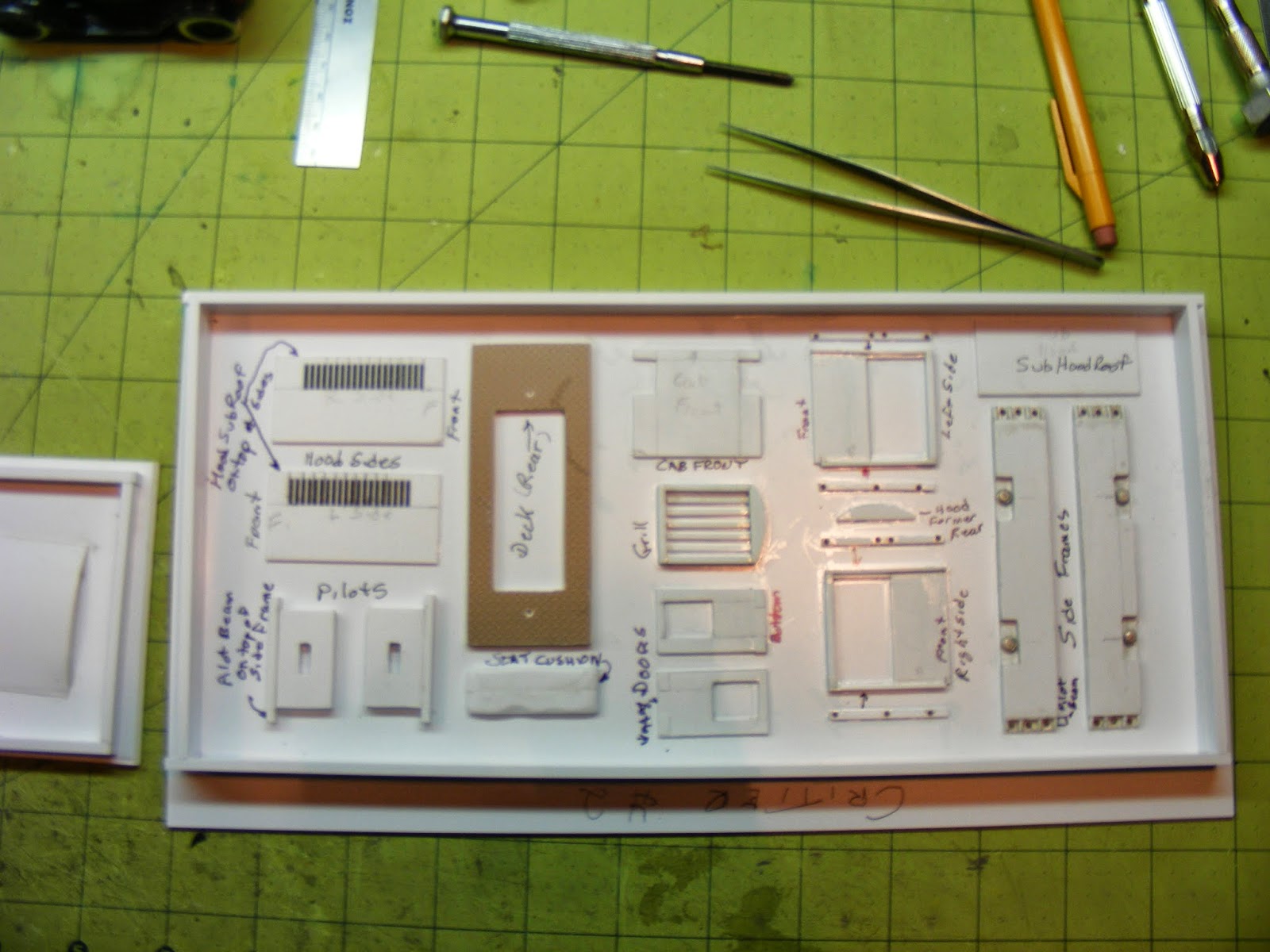 The Basic kit is a deck , 2 pilots , and 2 side frames. The superstructure is up to the individual. The second is a plymouth DL-2 , a full kit. Both are based on the Bachmann On30 trolley mechanism. The DL-2 has a cut down unit, roughly 3/4 of an inch cut off each end. 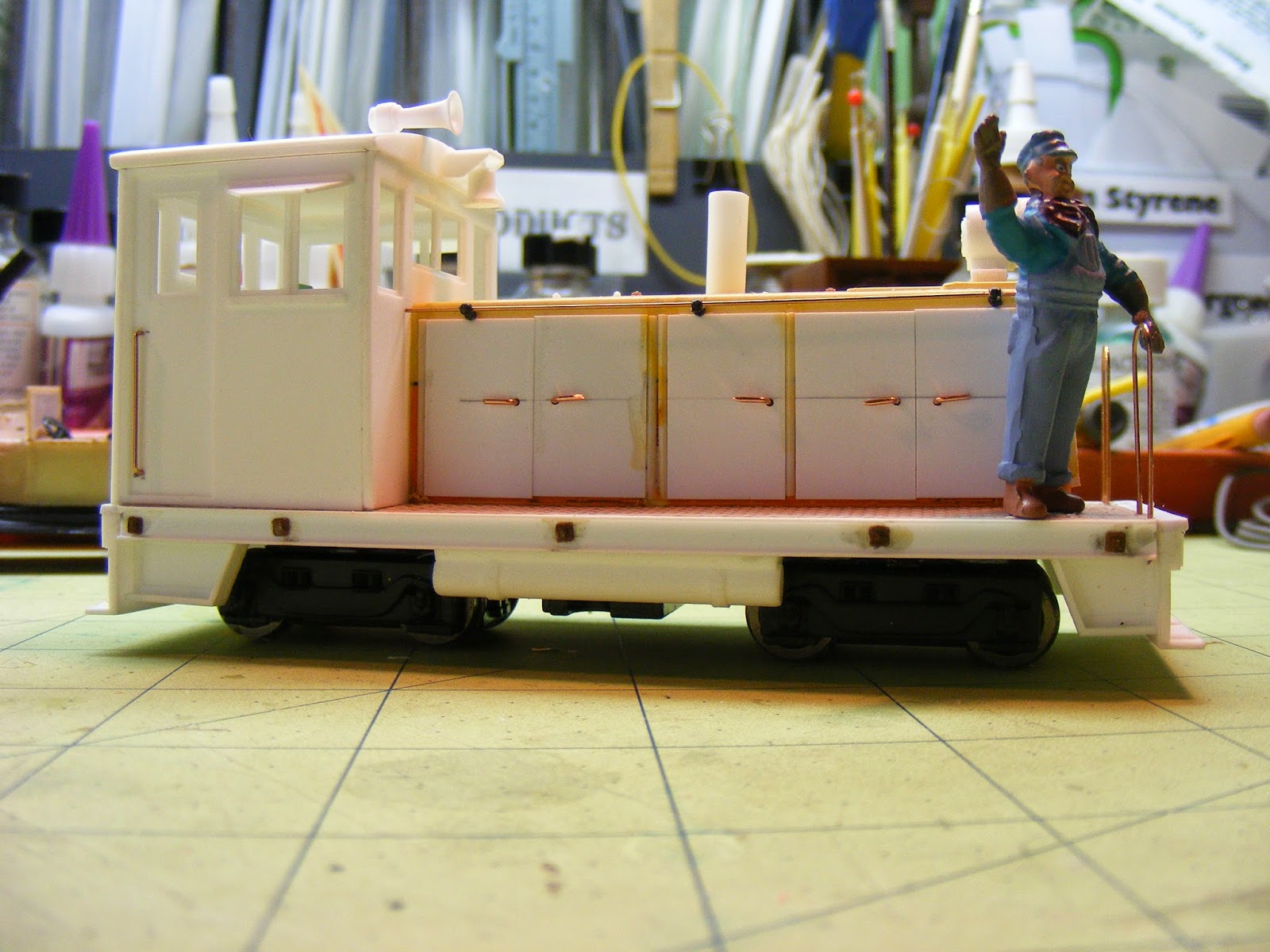 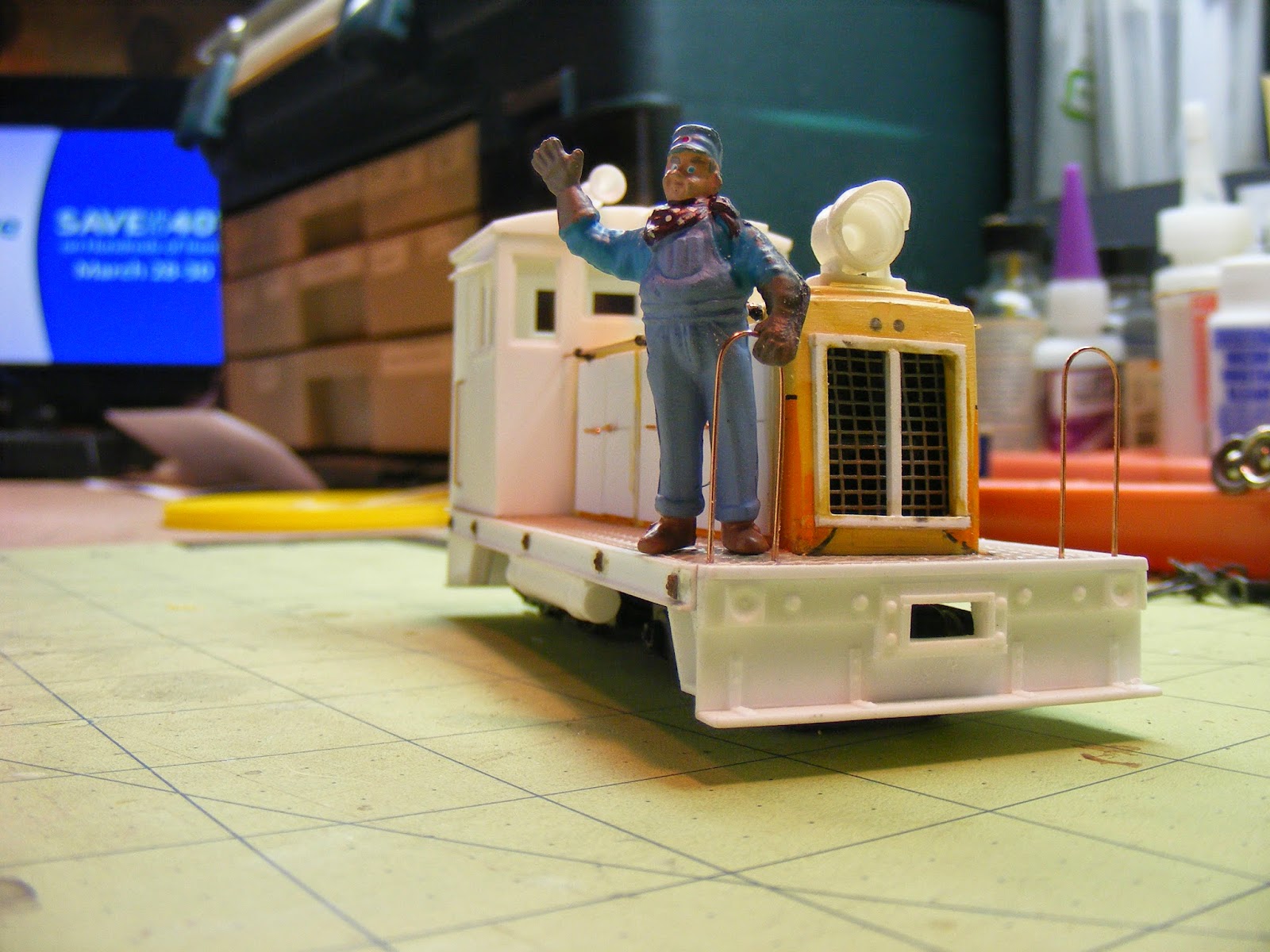 I will send some more pics of the progress of the layout and of the trackwork and of the new wharf when it is installed.

Be well -
Lee Schamberger
Posted by Rob D at 1:01 PM No comments: 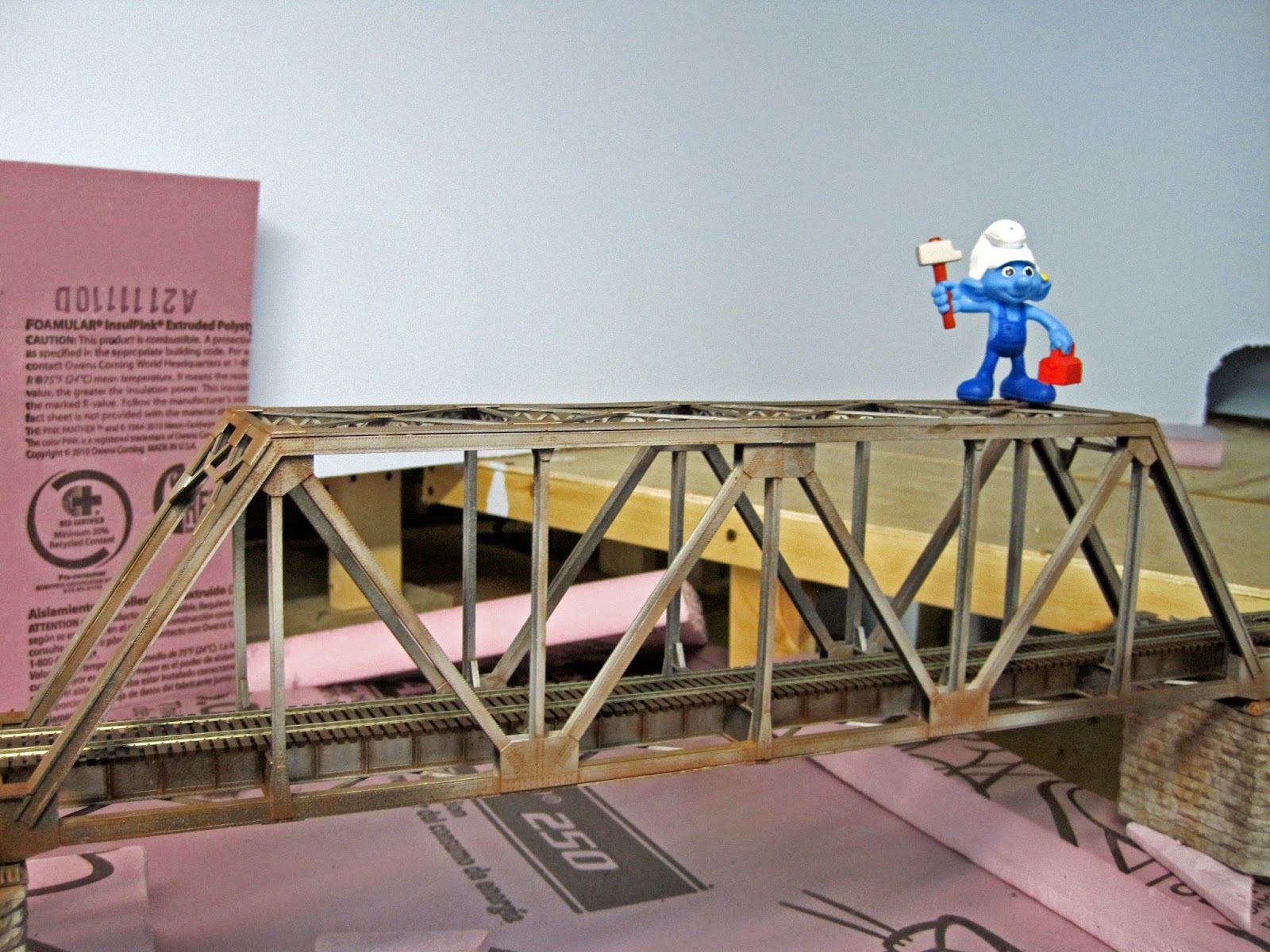 Well I been busy... the layout is starting to take shape. This will be the "new" Newport bridge...it's not prototypical but I like it more than the real pile trestle there.. 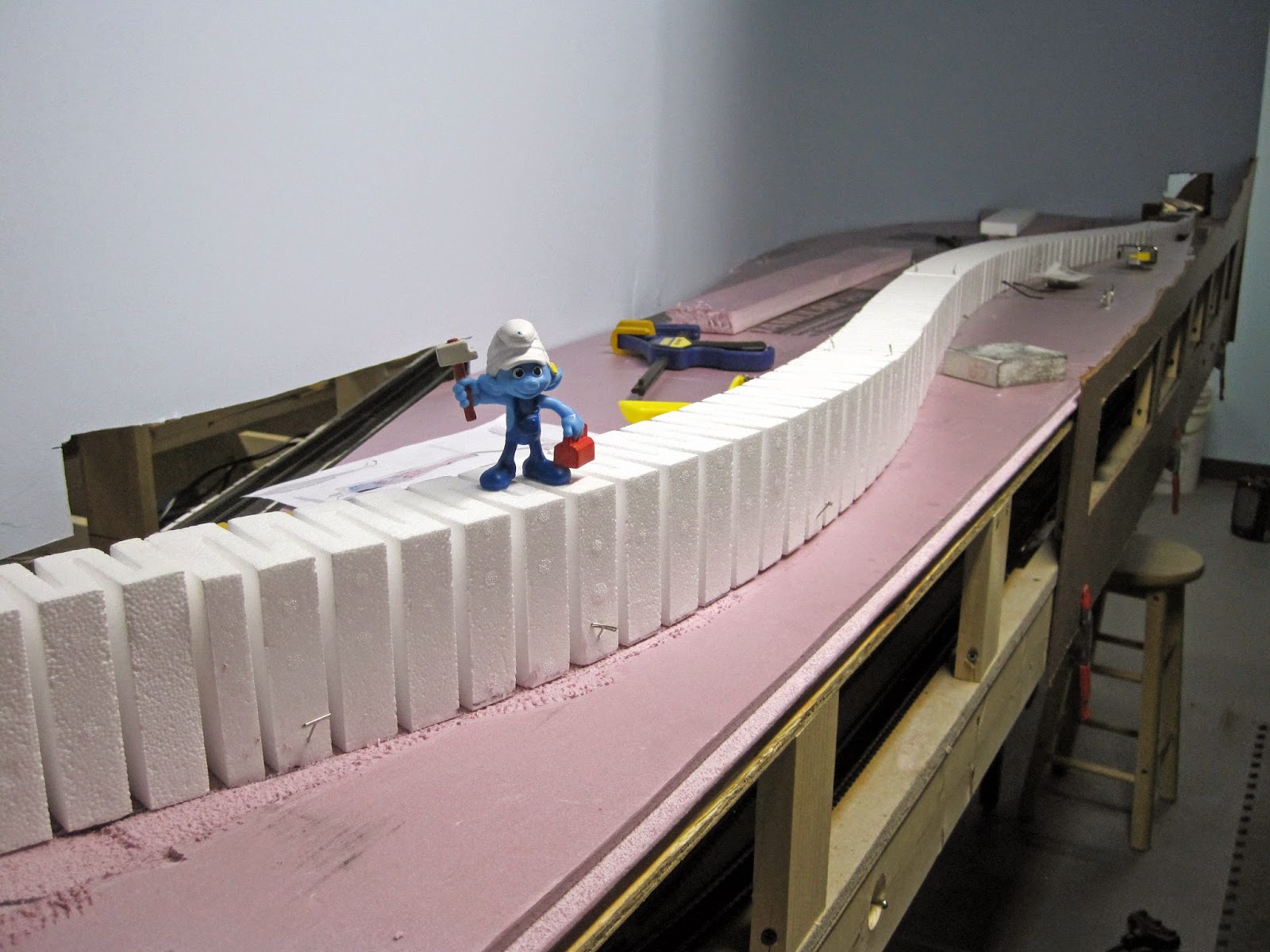 This is the downward grade heading north from St Johnsbury...I have an idea of what I would like to due here stay tuned... 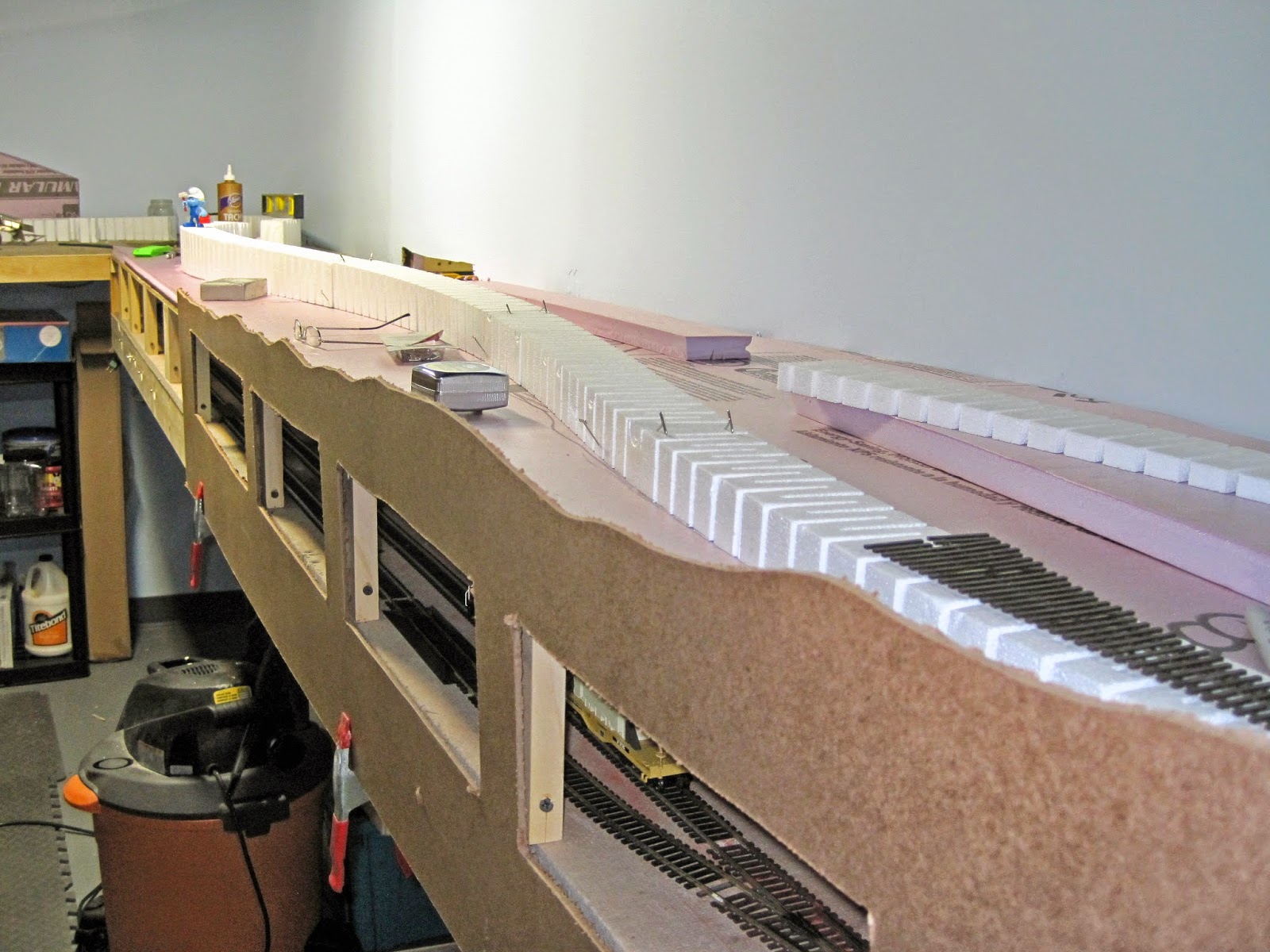 Staging for Maine Central and CP both directions is hidden under the graded area... 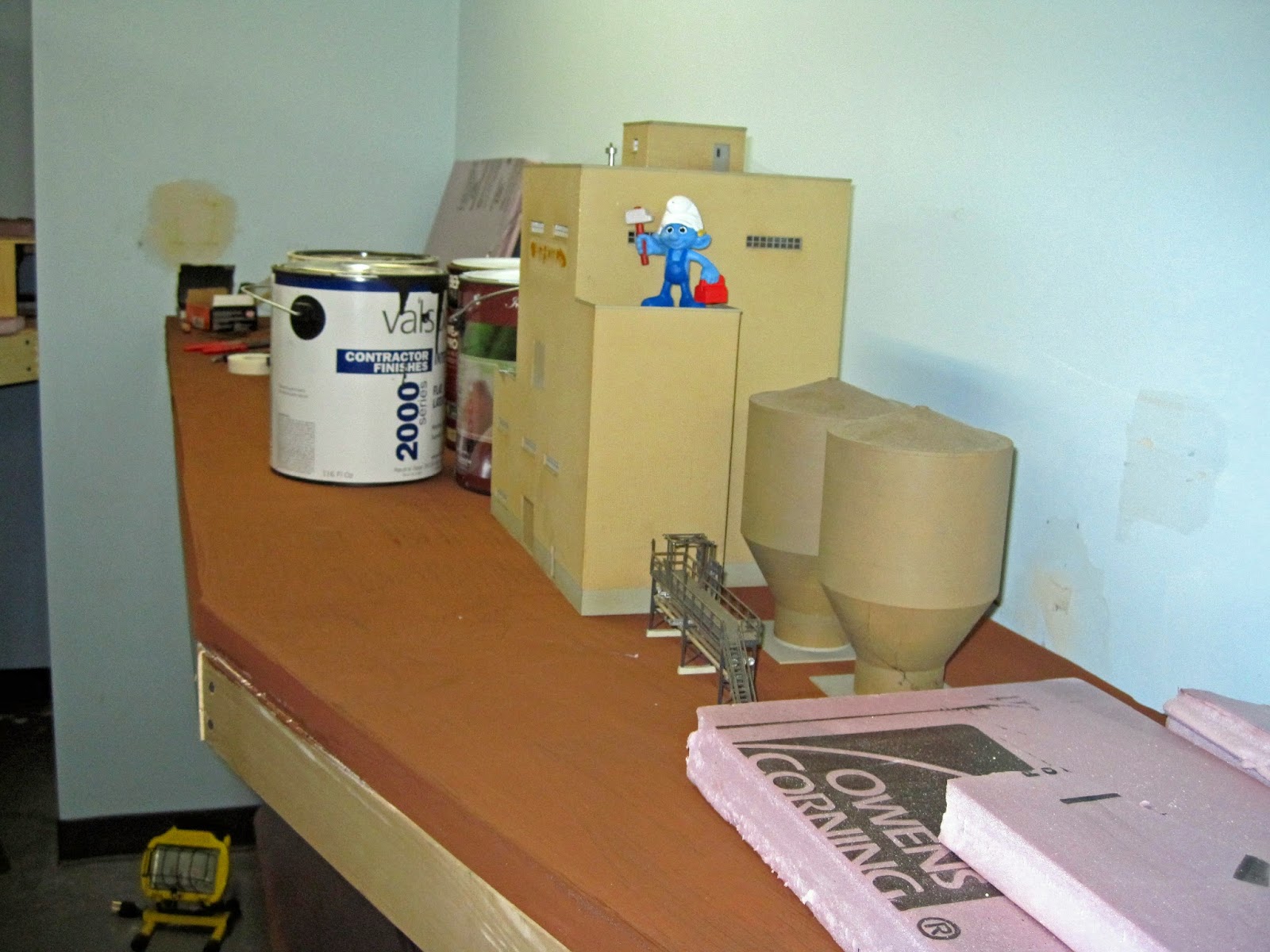 The largest industry will be be a fictional paper mill based on Finch & Pryun in Glens Falls. 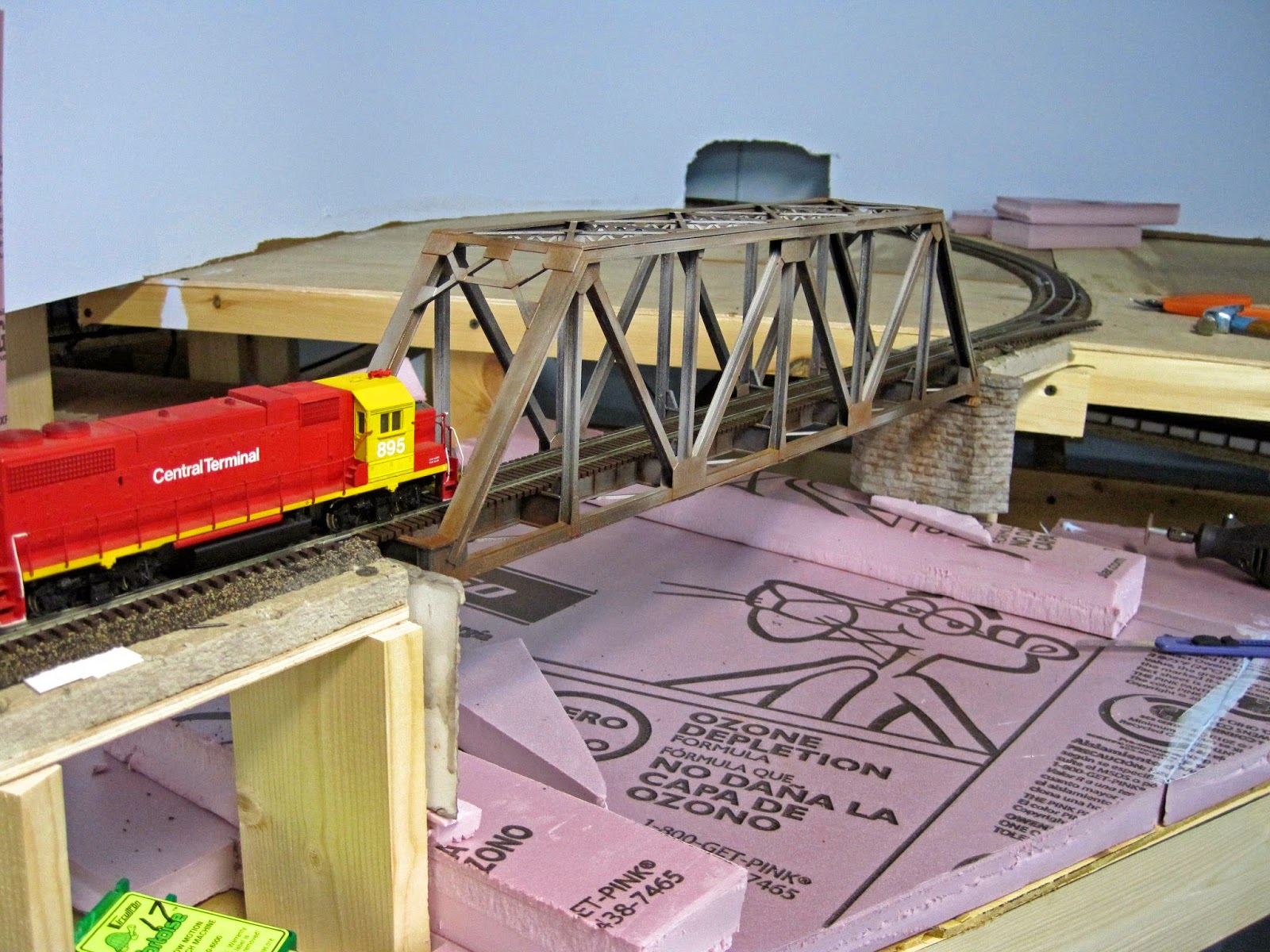 Another view of the bridge going into Newport with a Central Terminal GP-38-2 leading... 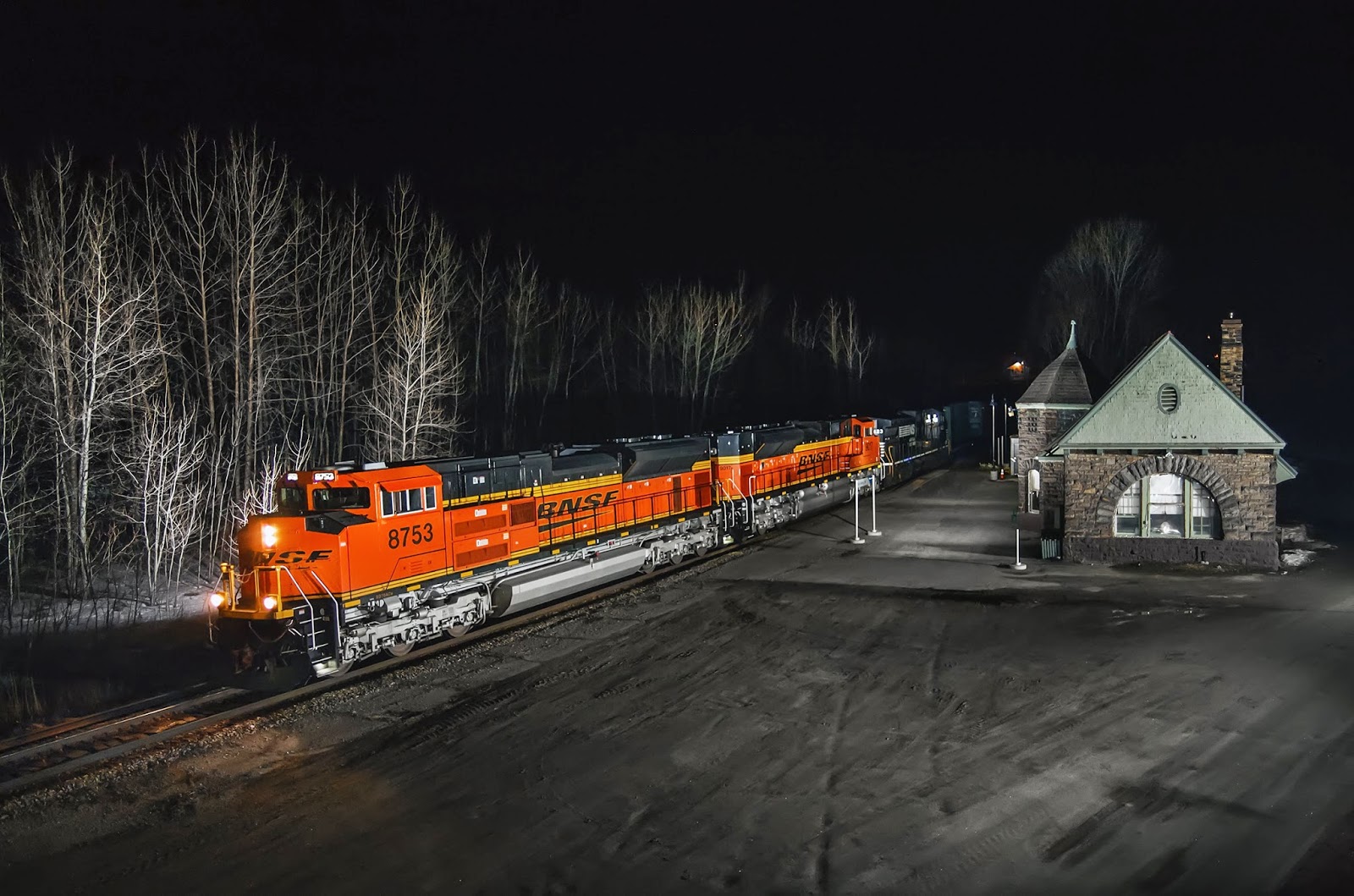 Every once in a while “color” shows up in the form of foreign locos leading on the NS power dominated 931/930 trains operated and crewed by CP over its ex-D&H route, hauling CN & NS freight between Binghamton and Montreal. Last night was one such occasion as a pair of newly built SD70ACes wearing owner BNSF’ “Swoosh” paint scheme visited. Running much earlier than 931 usually appears on the North End to suit the glamour of the paint scheme, I had all I could do to get over to Port Henry ahead of the train with time to set up lighting and climb up onto the bowed roof of the ex-CP RS-18 1800 on display with the 5D and tripod. When I jumped out of the civic upon arriving, I could hear the distinctive BNSF air horn to the south already! Part of the attraction of shooting passing trains at night for me is the drama involving visual and audio delights to the senses. This sort of drama where you can already hear the trains air horn before you start to set up any lighting was certainly an attention grabber! lol! At night though, it’s not over until the head end is by you and I went about calmly setting up the various flash units as 931s BNSF power drew closer. To my advantage, as you might conclude having enjoyed this view before, “by now” I have the lighting down for this angle from the roof of the RS-18 for a northbound, and track speed south of Port Henry is around thirty mph for freights.
Once I have the lighting in place, I climbed up onto the RS-18 via the front pilot then the chop nose up onto the bowed roof, with permission as the steps are plywooded off now, set up the tripod, set the focus and mounted the 5D. Looking at the times I took test shots, less than four minutes later I took this shot! Whew! Considering it takes sixty minutes to drive over from Hinesburg, VT., and I took the time to brew a thermos of tea before leaving..................I was thankful remembering my decision earlier to brew the tea that only needs twenty second steeps per pot, rather than the tea that needs four or more minutes! Oh yeah! A key part of finding...........Success! Again here at Port Henry! Maybe it is due to constantly seeing dirty dark red CP engines here at night, but dosen’t the spotless pair of newly built BNSF SD70ACes look elegant under the lighting at night!? And.............the same pair should return south tomorrow night leading 930s train!
Talk about being most fortunate! Ten nights ago I was last here shooting southbound ethanol 644 behind ex-SOO SD 60 6223 from the other end of this location. Out in the field behind the trailing BNSF engine in this photo. One of my eyeglass frames became loose and one of the lenses fell out.................into the snow...........at night of course............and I never noticed until I was having trouble manually pre-focusing the lens on the camera! What to do!? I retraced my steps that night when collecting the lighting but, you can imagine trying to spot a lens for eyeglasses in the snow......... So I figured once the snow melted it would show up, as I knew my steps that night setting up lighting, and more whitetail deer roam around in that field than people. Tonight there was still plenty of snow cover, but on cloud nine after capturing this image, I went over and retraced my steps when I set up the flash units in the field, looking intently with the head lamp in the snow...............halfway down the back of the field along the tree line there it was! The missing lens, lying flat atop the snow, right where I set up a flash unit! Talk about lucky! I counted my blessings more than once driving back to Hinesburg from Port Henry tonight! Shot on March 29, 2014 at 20:15. A Special Thank You to Bill Kozel for the hot tip! Please enjoy! Comments are welcomed.
All The Best In 2014;
Gary Knapp 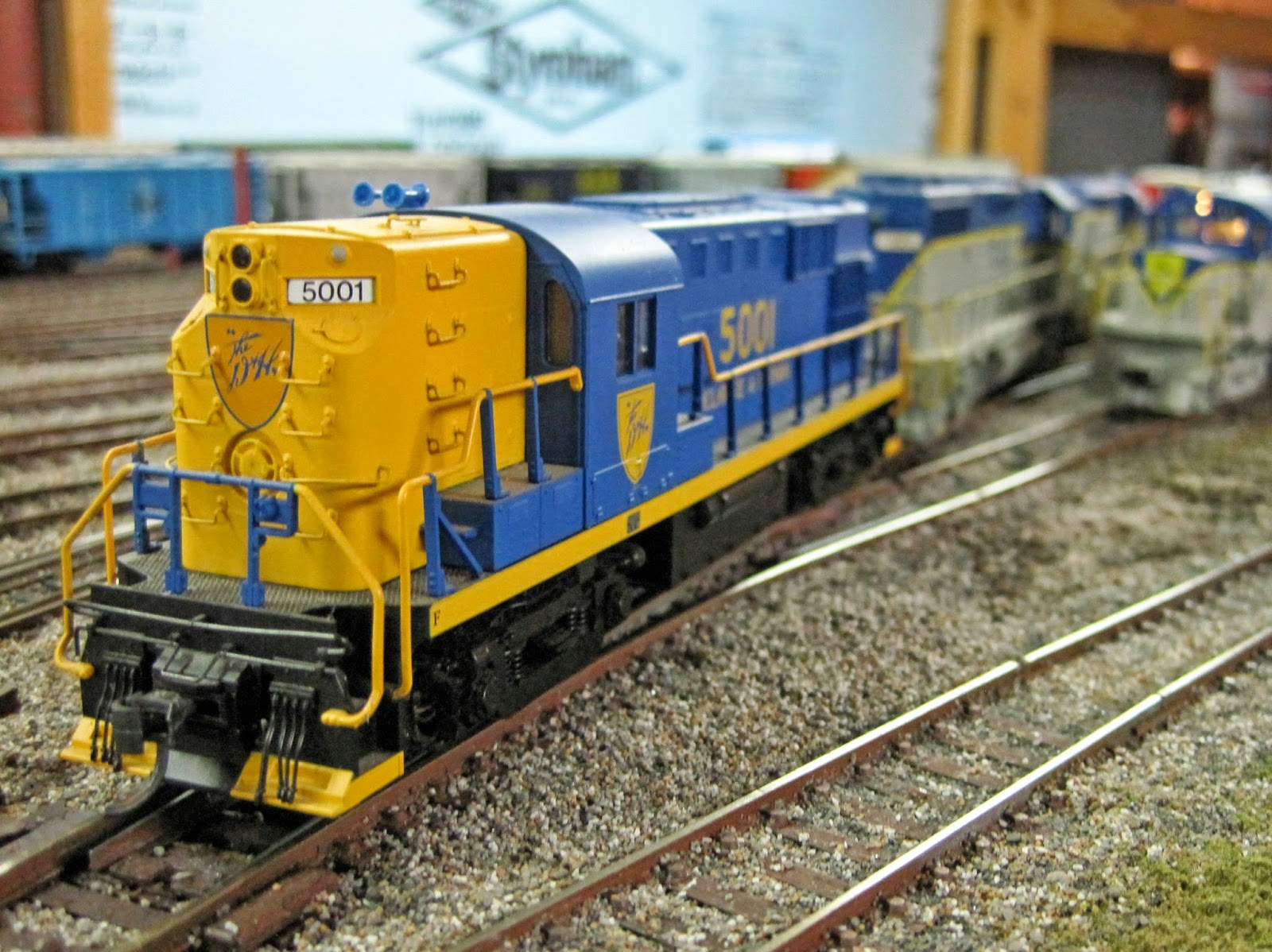 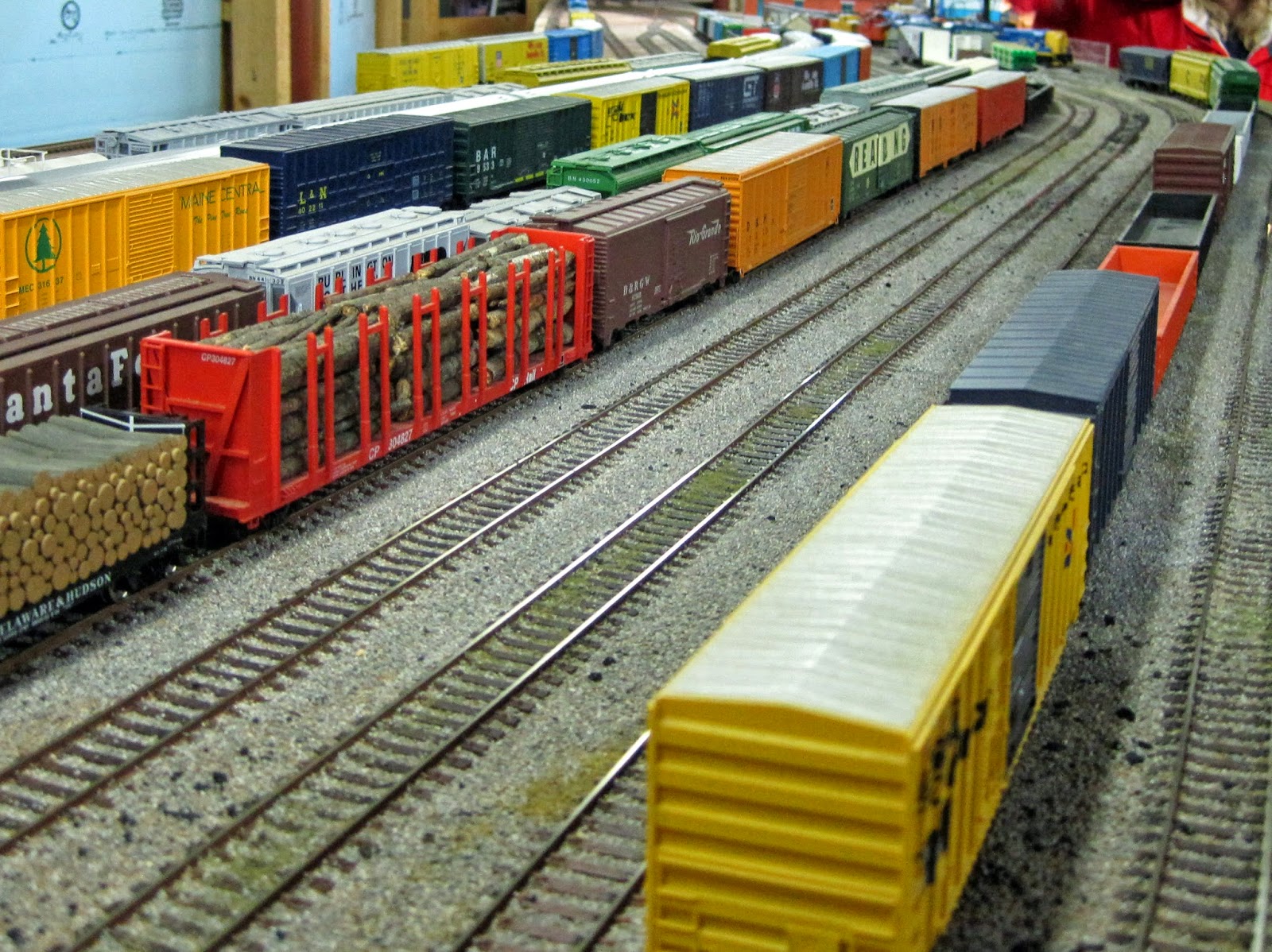 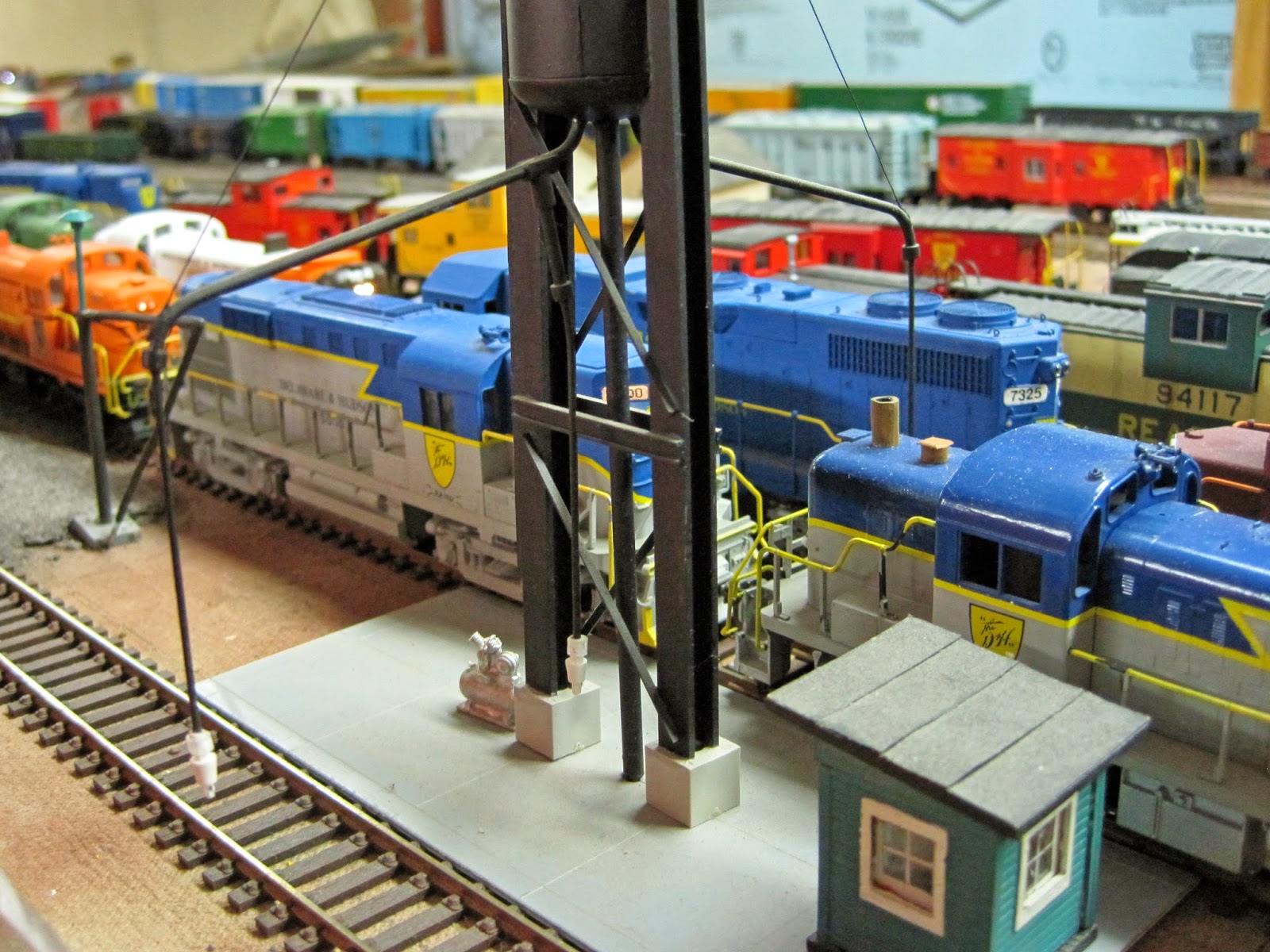 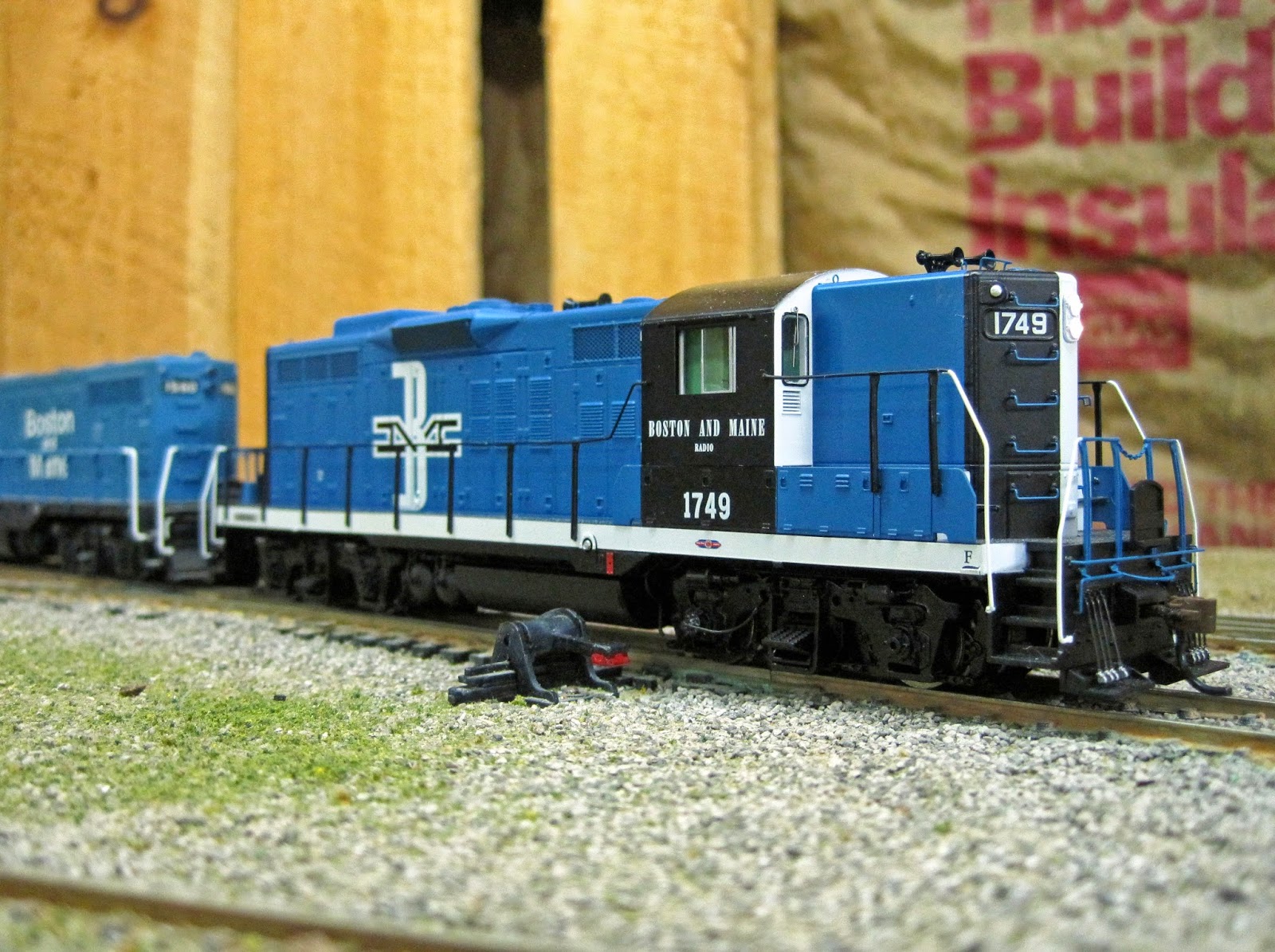 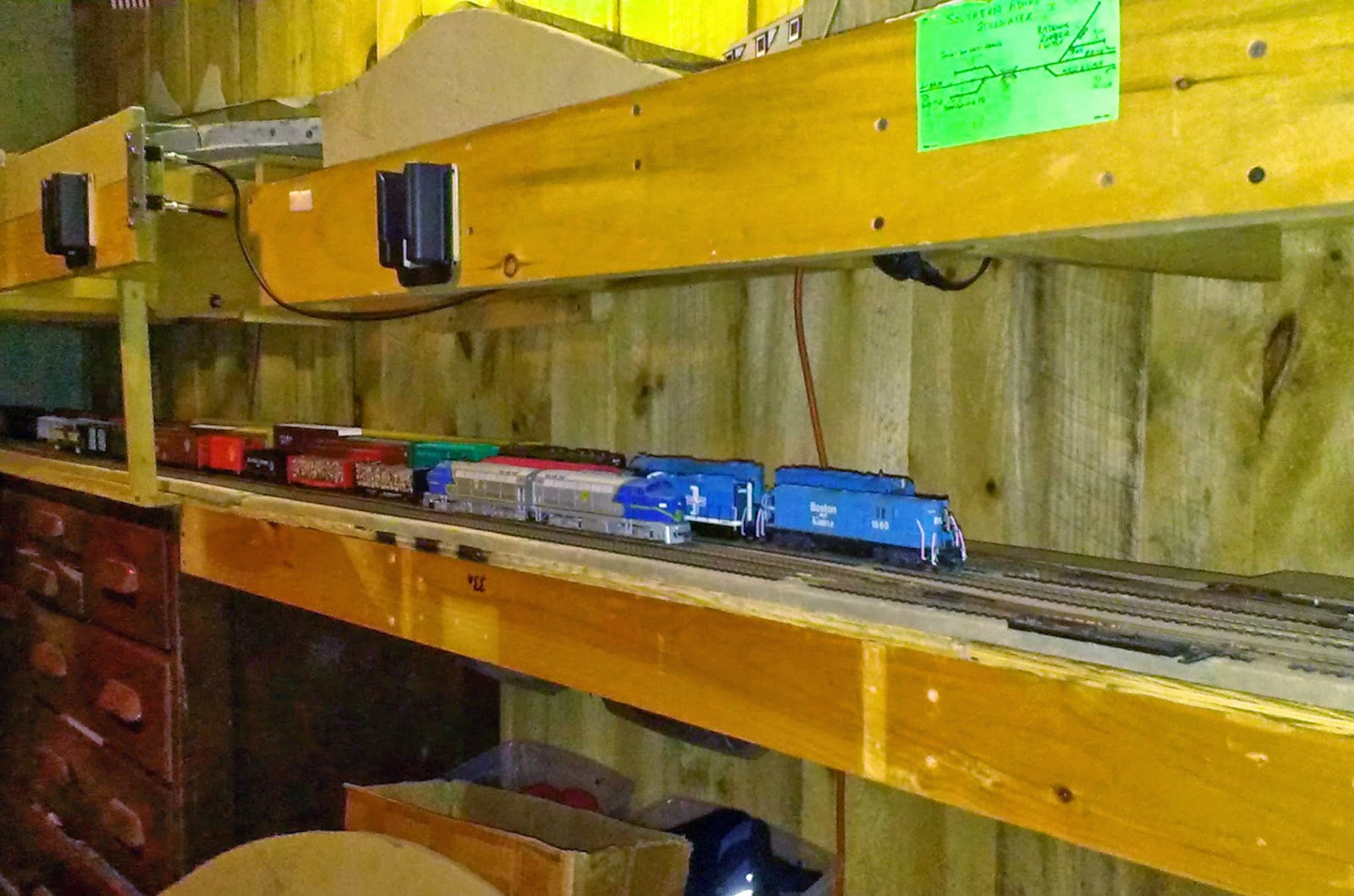 I finally got B&M staging relocated. Same yard, farther away under the Southern Adirondack with a new yard lead, tracks 3, 4 & 5 got longer and I made tracks 1 and 2 into a small runaround for SC23 and the B&M locals. Also much lower (with associated grade) for better access.

Brad Peterson
Posted by Rob D at 12:27 PM No comments: