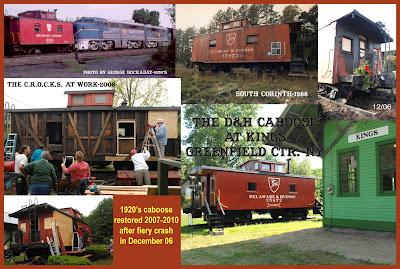 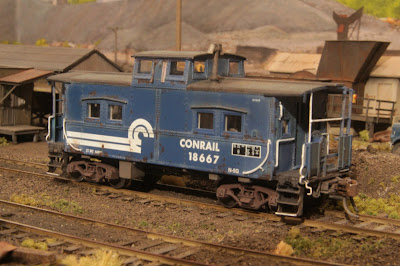 About a year ago I got back into a Conrail state of mind (for a while) and ended up doing a group of different classes of cabooses. These included ex EL, RDG, PC and LV. At the time I modeled the CR versions (I think) I did them quite accurately. All were based on prototype photos. The original LV's I didn't finish at that time. I was somewhat intimidated by the work I perceived as necessary to do the job right. This situation was corrected this week. It's cool in the workroom and nasty hot outside!!! I don't know if you have an interest in this but, the changes were really just a bit time consuming. My CR (ex LV) was from a prototype that was shopped at Juniata. They added a Pennsy smoke stack and some changes to the ends but other than that it stayed pretty much LV with only a poor paint job It was showing major rust after only three or four years. Reading (under CR) reshopped a lot of cabooses too, by the way. I used the Walthers Proto 2000 as a basis on these, it's head and sholders above any previous model of "Northeast caboose" It was a perfect Reading but not LV. I added the third step to each corner, proper end detail as from the LV shopping of the early 60's, proper height smoke stack and some other small stuff. 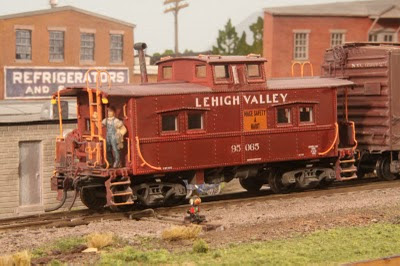 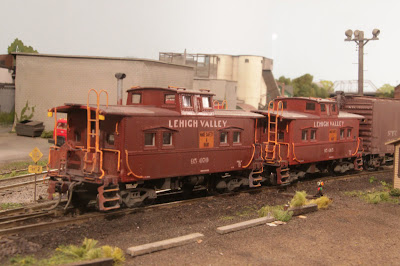 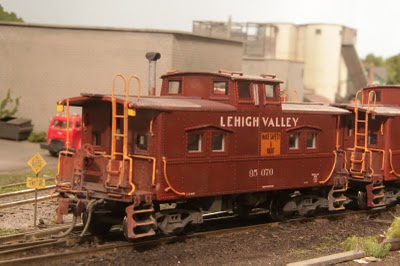 I don't know of many other modelers that are doing much Conrail and only a few doing really serious LV. If you think anyone else would be interested in this information or are doing anything with the Walthers model feel free to forward.

Later,
Wayne Sittner
Posted by Rob D at 11:55 AM No comments: 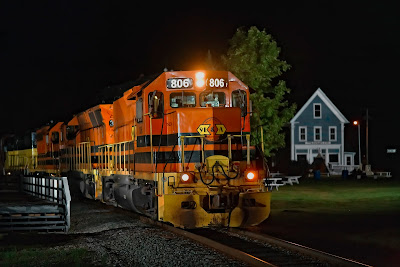 We are at the east end of the renovated North Stratford station tonight, as SLR 394 comes down off Bloomfield Hill into the curve near the town square with headlights dimmed. I have tried and tried for "a long time" to see a way to include the attractive Post Office and North Stratford Market in a photo with 394 here. Tonight I partially succeeded! The Post Office is lit up in a very satisfying capture! The best lens I have ever used, the Zeiss 100/2 Macro lens shows off again here, outresolving the 5D sensor, (sending more information to it than can be recorded) capturing the scene. 394 tonight is another money maker for the SLR, with sixty two cars. The normal car count lately has been in the upper thirties to forties. As the consist passed me, from atop the stepladder I heard voices hollering maybe forty cars into the train, I looked across the tracks in between passing cars and saw no one. It was pitch dark on my side, the train blocking any ambient light. I heard more voices hollering to each other and I'm watching the cars come by and I see a form come by hanging onto the handrails of a car running along the ballast! I could'nt believe my eyes. Then here comes another form of a person doing the same thing. 394 was only doing about ten mph through town, but I could not believe what I was seeing! As the rear end came by, I walked down that way but did not spot anyone standing around. I concluded they were hobos, and I wondered wether the SLR has "an ice cream stand" (Vacus x-ray scanner and building) up at the border as the D&H and NECR have. After loading the lights into the Civic, on Cloud Nine, I called the SLR dispatcher to tell him what I saw, then went over to Groveton and poked around looking for new angles around the station to catch 393 returning that morning. As I turn the Civic around in a dirt lot trackside, the headlights light up a pickup track in passing and I stop......did I see a person sitting there? I back up to light up the pickup again and yup....sure enough, there is a man inside.......and Universe deals him his card.......the unknown! As if on cue, he opens the door and hops out, plastic bag in hand with food. Universe deals Gary his card.......the known....... I have seen someone get picked up here during past nights. He comes toward me at a slow jog, not recognizing the "unknown" card Universe has dealt him. I turn on the inside light so he can see me. All the doors are unlocked as I have been in and out of the car while looking around and I'm wearing an LED headlamp on my head, you would think.........but he thinks I'm his ride! LOL! Up to the passenger side he runs opening the door to jump in! A man in his fifties of slender build. Now, in my car, (as Richard Wingler found out one afternoon) you don't just....."hop in" on the passenger side, there are all sorts of gizmos, gadgets, flashlights and items related to night photography on the seat ready to be used! The man sees this collection of "stuff"...... pauses, and Universe smiles! He recognizes the card he has been dealt. This is a strangers car. Leaning in slightly to really look at a smiling Gary wearing a headlamp strapped around his head, he says, "I don't know you"! I reply, you are right! Staring at me now, he says "Who the hell are you!" You don't know, was my reply. I'm NOT your ride, I added. LOL! He started to laugh and apologizing walked back to the pickup! And I swung out of the parking lot to continue looking around, enjoying being on the "known" side as Universe dealt for a change. Maybe the Perseid Meteor Shower, which was in full swing that night, had something to do with people behaving oddly, but it was another night to remember trackside! SHot in North Stratford, NH on August 11, 2010 at 22:14 with the Zeiss ZF 100/2 (Nikon) lens set at f2. Please enjoy! Comments are welcomed. 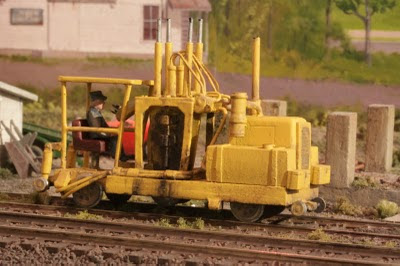 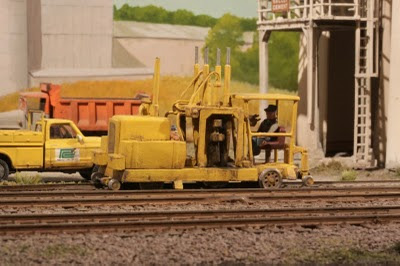 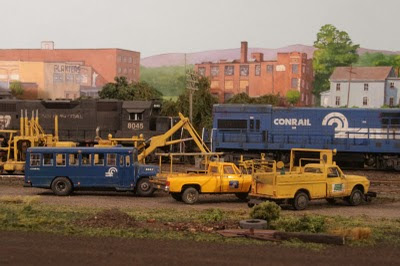 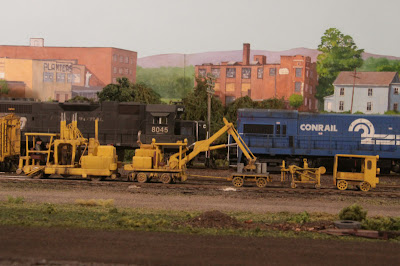 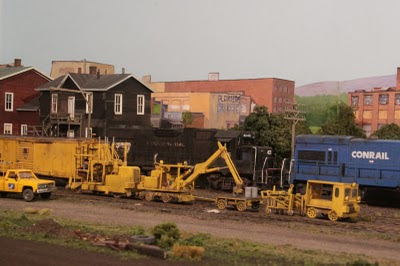 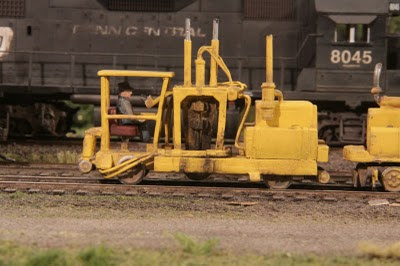 As most of you know I went right from the 1953 L&WV 401 freight motor to this 1983 MOW kick. Aged 30 years in the blink of an eye. I've actually been at this thread for a month. The four central pieces, the track equipment, are from the old Durango Press 4 in 1 kit. This, in itself, was based on Jim Slaughter's "Timber Gang" series from RMC that he spread out over a few years in the early 80"s. Because the DP instructions were minimal and Jim's articles were a bit sketchy I based all my work on slides I took in '73 and again in the early '80's of equipment I found here in Kingston and up in Selkirk. All my models, including the bus and trucks were from the late PC and early CR era. I sent slide scans of my prototypes out to some but not all. The quality of my scans isn't too good and I know some of you aren't exactly fans of early Conrail. I hope the modeling suits your fancy. I built all the models except the CR Chevy pick-up. That's RTR from Trident Models.

Have a great weekend.
Wayne
Posted by Rob D at 9:44 AM No comments: 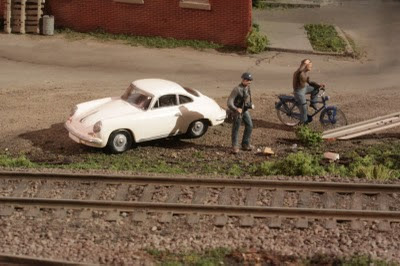 The photographer/railfan figure I modeled to represent myself, the Porsche 356 was one of my early railfan cars, the "boy on a bike" is you! That's the way I remembered you in Mechanicville. Over the years I did models of several of my railfan friends

Later,
Wayne Sittner
Posted by Rob D at 9:30 AM No comments: 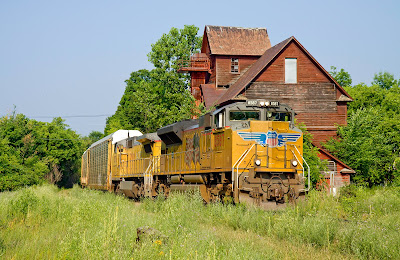 Hope everybody is enjoying the heat this week. God do we need rain. Every creek is dry from my house all the way to Binghamton. Speaking of Binghamton on Wednesday morning I had to make a run down to a fellow Harley dealer to swap bikes. After a quick stop at CPF-503 Below Delanson but in still in the Duanesburg to check the signals which were upon my arrival dark so I decided to keep moving, after a quick stop at Dunkin Donuts in Schoharie I jumped on 88. For some reason I decided to get back off and drive down into Cobleskill. I have never been down to see the abandoned coal building which dates back to the late 1880’s. There is a great article which appeared in Railroad Model Craftsman many years ago that talked about its history and had detailed photos of it inside and out. Branchline Trains now offers a fabulous laser kit of it for both HO and N. Anyways I don’t know why I never went here before stupid me. While walking around I heard a horn to the south. Great a northbound. I got set up. I figure here we go another set of NS GE’s but instead UP power. Cool! After taking my pics I got back in my Sprinter and headed south. I was temped to head back to (CPF-503) to get one more shot but I wanted to stay on Schedule and also grab Breakfast at the Greek Diner in Oneonta. As I drove south I didn’t see anymore trains until Oneonta where another NB (#931) was going under 88. Dean