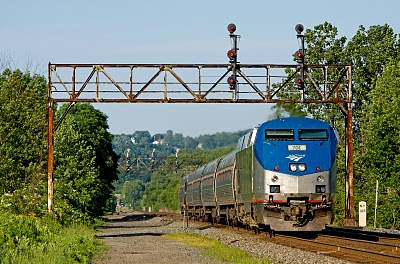 Got a tip on Monday June 21st that there was a Clean Warbonnet and some CP power going west out of Selkirk. At the time I was home finishing up mowing my lawn (4 Acres W/Push Mower). Around 4 I pulled the pin and took off in the truck for Fonda. After Waiting from 4:30-7:00 PM and watching countless eastbounds Parade by me the only Westbound I caught was a late running #283. The other two trains that I was after never came west till later in the evening incurring delays due to trackwork over near RJ. Somedays depending where your located your doing good if you get Amtrak. I also did see that night before I left an eastbound FRA movement with a six axle GE , a baggage coach and one of the FRA’s Darth Vader Looking test cars. BTW nice to see that FRA personnel or exempt from vests.