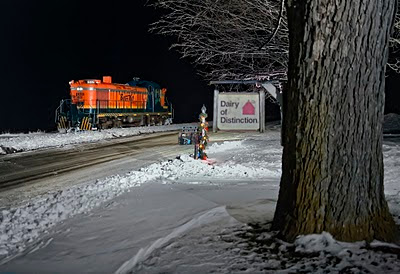 I had been made aware the previous night by friend John "Cully" Culligan, that the ALCO RS-3 powered Battenkill Railroad would be using their RS-3 605 to run down to the interchange at Eagle Bridge, NY during December 28th. And with these shortened days, the opportunity "might" present itself to capture the elderly ALCO passing the Cambridge Station as dusk or darkness fell. For "Out of Towners", the Battenkill operates one day a week, (usually Tues.) and their day usually begins at seven am. Because of this daytime schedule the ALCO RS-3 powered line has not been on my radar. Rest assurred, I will be visiting again soon! SO after returning from shooting the pair of NECR GP 38s on 324 earlier that morning, I went horizontal for a couple hours, did'nt really get much sleep. I mean, how many times do you get to shoot an as-built RS-3 at night? Ha,ha,ha! A quick check of the email around noon confirmed the 605 was running!! This was too much! Another great gift to shoot. Leaving the compound around 1:30 pm, I was in position in Cambridge at 4, enduring driving into the setting sun all the way south, LOL! I know.......I know.......its a rough life! After setting up the lights, Cully walked in, but alas, the 605 showed up maybe fifteen minutes before it got dark. Not to worry, proclaimed Cully, and he led me on a mini tour of Shushan, then we went over the hills on a shortcut, coming to a stop in front of a classic farmhouse outside of Battenville, NY. I found a setting I liked in the front yard, as Cully knocked on the front door for permission on the property and we quickly threw up the lights. Once I was happy with the lighting, Cully went out to meet 605 at a crossing up the line to make them aware of the impending night photo. The engineer was enthusiastic about this, and offerred to come to a stop and dim the headlights as well as turn on the number lights! With everything in place, Cully rejoined me back here, and waited to spot the 605 as she pulled up to a stop. The stage was set for my first night photo of an honest to goodness RS-3! In a few minutes 605s headlight was spotted, and as she came idling up to a stop it all came rushing back to me; the many appeals of the ALCO RS-3s. The 244s exhaust sounds otherworldly now, in 2010, advertising the brute pulling abilities ALCOs were known for. Within a minute, its all captured! One of New Englands reclusive antique diesels pausing for its portrait in the night. Afterwards it was Cully who accurately summed up the night shoot as "Sharing vintage champagne" . Thanks for your help Cully! Shot in Battenville, NY on December 28, 2010 at 18:11. Please enjoy! Comments are welcomed. 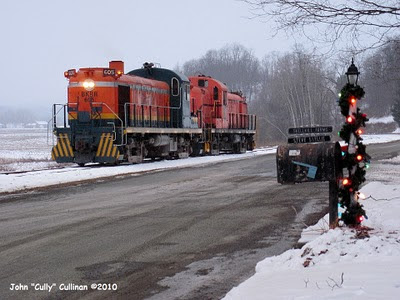